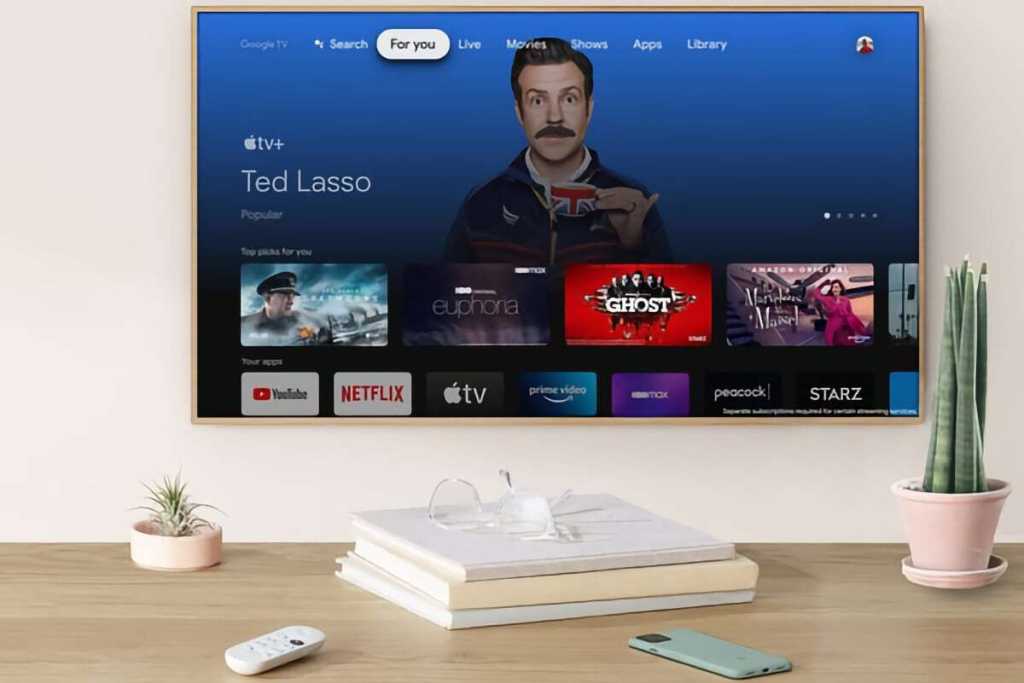 The Apple TV+ streaming service has a lot of work to do to be more competitive with Netflix, Hulu, Disney+, and other services. In order to grow its audience, it needs to be available to more people, and Apple TV+ took a big step towards that on Thursday as the Apple TV app became available on Chromecast with Google TV.

Users of the $50 Chromecast with Google TV can download the Apple TV app to the device and get access to Apple TV+ shows such as Ted Lasso, The Morning Show, Palmer, and The Snoopy Show. Once the app is loaded on the device, you can access it through the “Apps” or “For you” tabs. You can also add TV+ shows to Google Watchlist, and Google Assistant can be used to verbally ask Google to launch the Apple TV app or play an Apple TV show.

The Apple TV app also gives you access to TV shows or movies you have purchased directly through Apple, and to Apple TV Channels.

Apple TV+ is $4.99 per month, though Apple does offer a free year of the service when you buy a new Apple device. Apple has also extended that trial period a few times. If you decide to subscribe to other Apple services— Arcade, Fitness+, Music, News+, and iCloud—you can sign up for an Apple One plan, a pricing plan that bundles Apple’s services together for discounts.

Initially announced last December, Google’s announcement on Thursday did not state if the Apple TV app supports HDR (including Dolby Vision) or Dolby Atmos. The device is capable of streaming HDR10, HDR10+, and Dolby Vision content, as well as Dolby Atmos audio. Google did state that the Apple TV app will also be available on TVs made by Sony and TCL that run Google software.

If you’re looking for an affordable alternative to Apple’s own Apple TV hardware, the Chromecast with Google TV may be it. At $50, it’s a lot cheaper than Apple’s Apple TV 4K ($179 for the 32GB version) and Apple TV HD ($149). The Chromecast supports 4K HDR streaming at up to 60 frames per second, and its hardware remote is a lot easier to use. And you don’t even need to use the remote—you can use voice commands. A recent report said that a new Apple TV box could include features such as improved performance for games, an updated remote control, and a new processor, but if all you want to do is get access to the Apple TV+ service, Apple TV Channels, or content you purchase directly from Apple, the Chromecast with Google TV looks like a great deal.