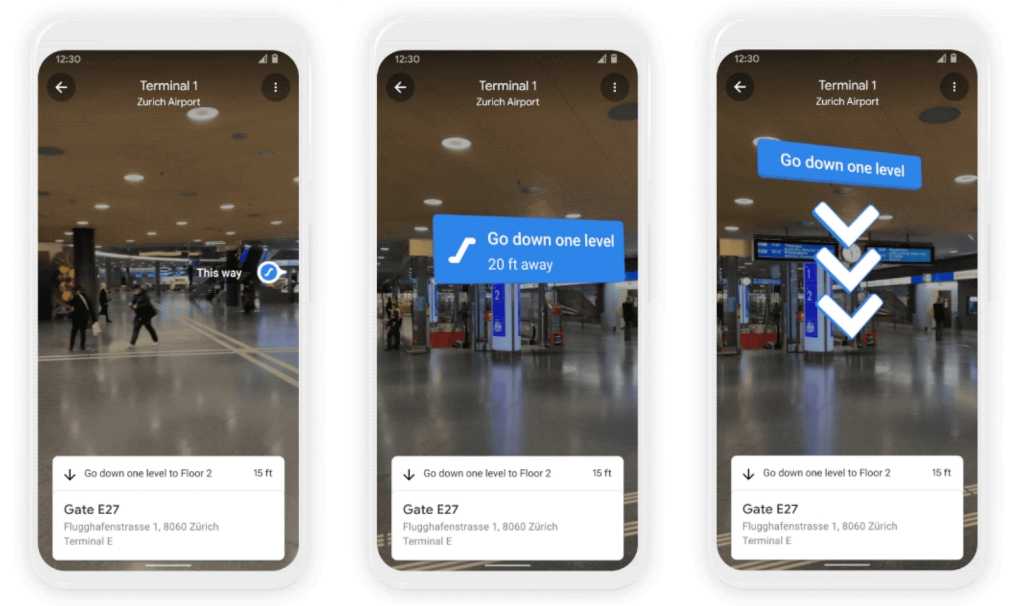 Ever get lost in a mall, airport, stadium, or some other grand indoor location? Google on Tuesday revealed a new Maps feature for its iOS and Android apps to help you get around in such a place, along with several other new features for both iOS and Android phones.

Live View uses augmented reality to help you determine where you are, and then you can use it to figure out how to locate exits, restrooms, ATMs, counters for assistance, gates, and a lot more. It works with your phone’s camera to scan a location, and it then flashes directions arrows, and banners to signal points of interest. Live View can also give you directions within a mall even if that mall is multi-story. It’s unclear what system Google is using for indoor mapping, but Apple’s own Indoor Mapping Data Format was certified as an industry standard earlier this year. Apple has been working on indoor mapping for years, but Apple Maps has yet to integrate indoor mapping into its consumer features.

As Google explains, Live View uses global localization and artificial intelligence “to scan tens of billions of Street View images to understand your orientation.” Maps can then determine locations within a building, and use that information to help you out. Live View is fairly limited, with mall mapping available in Chicago, Los Angeles, Long Island, Newark, San Francisco, San Jose, and Seattle, but it’s coming soon with support for airports, malls, and transit stations in Tokyo and Zurich, with more cities on the way.

There are are several features arriving later this year. Google Maps will also soon be able to tell you the most eco-friendly route you can use to get to your next destination. Coming later this year, Maps will implement a routing model that gives directions that are the most energy-efficient (using the least amount of fuel) and compare them to faster but less efficient routes. Google Maps will also be able to identify low emission zones so you can see if your vehicle is allowed in and if not, take another route or choose an alternative mode of transportation.

If you do decide upon an alternative mode of transportation, Google Maps will soon have even more new features to help you out. Maps will let you compare ETAs by car, public transit, or bike on a single screen, and your preferred modes are prioritized so you see that information first. For example, if you live in a big city like New York City and take the subway, that information is provided first.

With delivery and curbside pickup becoming popular due to the Covid pandemic, Google Maps will have more specific information on businesses that offer such services. You’ll be able to find delivery providers, pickup and delivery windows, fees, and order minimums. This feature will first be implements with Instacart and Albertsons stores in the U.S., and then extended  to other businesses.

Coming soon, Google Maps also has a new weather layer that provides the current weather for a location, so you can prepare accordingly if you’re travelling. The new air quality layer can tell you how healthy the air quality is, helpful for anyone with allergies or respiratory issues, or when its fire season. These two feature use data from The Weather Company. AirNow.gov, and the Central Pollution Board. The weather layer will have a worldwide release, while the air quality layer initially launched in Australia, India, and the U.S.

If you’re devoted to Apple Maps, there was some good news today. Apple Maps now provides airport COVID-19 health information, so if you’re headed to the airport, you can get information on what precautions passengers need to take once there.