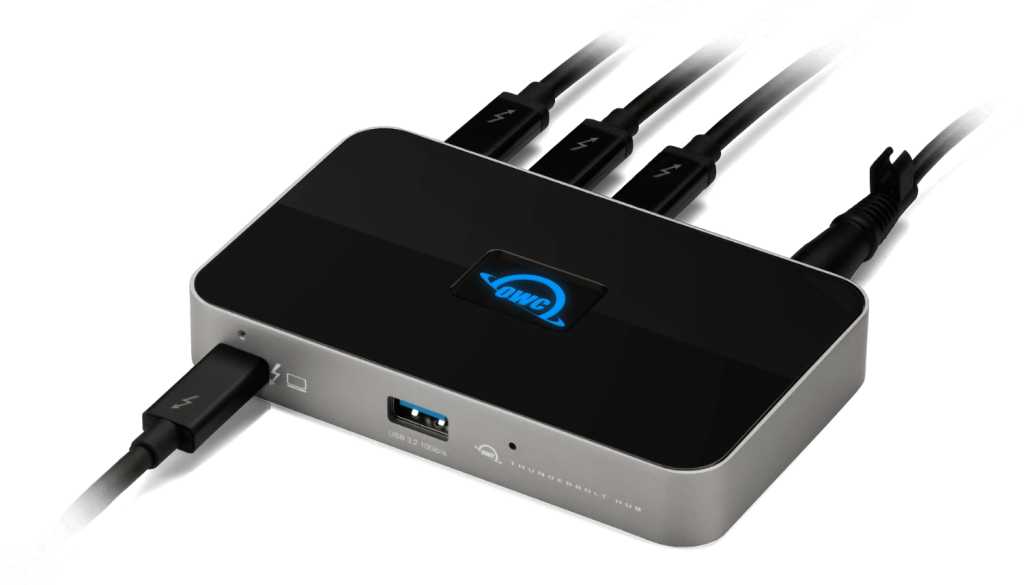 The OWC Thunderbolt Hub allows a single port to have the advantages of Thunderbolt multiplied by three—plus one USB 3.2 Type A port.

Thunderbolt 3 was an amazing improvement in simplicity, despite the confusion that came with it and the transition from USB 3.0 over USB Type A, Thunderbolt 2, Mini DisplayPort and the like. Thunderbolt 3 uses the orientation-reversible USB-C connector, and can deliver up to 40Gbps in each data direction in an ideal world, while also supporting power (up to 100 watts, depending on controller and cable) and super high-res displays.

OWC’s Thunderbolt Hub with four Thunderbolt 4/USB 4 ports and one USB 3 Type-A port fills a piece of the puzzle that’s been missing since Apple introduced the new technology in 2016: a multi-port external hub. Only certain Mac models have had more than two Thunderbolt 3 ports. (The short-lived 12-inch MacBook had just one, but it only handled USB over USB-C, not Thunderbolt 3.)

Support for a hub was available in the Thunderbolt controller that Apple has included with all its Thunderbolt 3 Macs, but the company hadn’t yet enabled this feature and a few others at the operating system level. That came with macOS 11.1 Big Sur on both Intel Macs and M1 Macs. The OWC Hub requires macOS 11.1 or later for it to work correctly. (Windows PCs require a Thunderbolt 4 controller for this hub’s features.)

The OWC Thunderbolt Hub plugs into AC power, which lets it perform a few nice tricks. First, it can provide up to 60 watts over the included Thunderbolt cable to a Mac laptop. Second, each Thunderbolt 3 port offers up to 15 watts to attached devices. Third, even the USB Type-A port can deliver as much as 1.5 amps, sufficient for fast charging iPhones and iPads.

The Thunderbolt 3 ports can handle anything you would plug in directly to a Mac’s Thunderbolt connection, including hardware that has to be the first in a daisy-chain of devices for hardware that can passthrough Thunderbolt. Depending on your Mac, you can plug in one or two displays directly into the hub.

I tested the device with multiple external Thunderbolt 3 drives, and it provided consistent access and high data rates. No additional effort was required for management or configuration. All USB-C connectors feel a little iffy, as there’s no neat click-in system or locking mechanism. OWC offers a low-tech add-on option, the ClingOn, to help secure cable attachment.

Now, there is a math problem involved here. Although this is a four-port hub, with three of them Thunderbolt, you net out just two additional Thunderbolt ports: one port on your Mac has to plug into the host port on the OWC Hub. That’s still two more than you had, plus the 10Gbps USB 3.1 Type-A port. For $149, that seems both expensive and worthwhile, particularly if you’re using it as a docking/charging station for a Mac laptop.

OWC offers free downloadable ejection software for macOS and Windows, which lets you click a button in the menu bar to ensure that everything connected to the hub that needs to be unmounted from macOS does so in a single operation and you’re sure you can unplug the hub or unplug from it. That makes it well suited not just as an extension for a desktop Mac but for a Mac laptop as well.

This software requires a kernel extension, which means a restart after granting permission on an Intel Mac. With M1 Macs, you need to reduce overall security to enable a kernel extension, but I found I could still use the “eject all” option without lowering the system security level. OWC also told me that later in the year, they plan a revised version of the software that won’t prompt for a security modification, either.

You can use more than one hub on your Mac, but each hub requires a separate Thunderbolt bus, which is a separate data path and controller. That varies by model. Some Macs have four Thunderbolt 3 ports and two buses (one for each side of a MacBook Pro); other desktop Macs configure buses and ports differently. While the Intel MacBook Air shares one Thunderbolt 3 bus across two ports, the M1 laptops and Mac mini have two, one for each USB-C connector. (You can hold down Option and choose  > System Information and click the Thunderbolt or Thunderbolt/USB4 link in the sidebar to see how many buses your Mac has.)

A sidenote on Thunderbolt 3 support in the newest Macs: The Apple silicon Macs call out that they feature “Thunderbolt/USB 4” with Thunderbolt 3 and USB 3.1 Gen 2 support, but OWC says all the optional elements in Thunderbolt 3 are now required for Thunderbolt 4 certification. Effectively, Intel Macs with Big Sur 11.1 or later are more or less Thunderbolt 4 except in labeling. (Other features include two 4K or one 8K display, which the M1 Macs and Intel Macs don’t allow for: the Intel Macs and the M1 Mac mini provide for at least two 4K displays, and some up to 6K with one monitor; the M1 laptops only handle one external display, and that up to 6K.)

At $149, the OWC Thunderbolt Hub is a reasonable price to add a net of two Thunderbolt ports and one 10Gbps USB Type-A port for expanding access to drives, displays, and other peripherals.