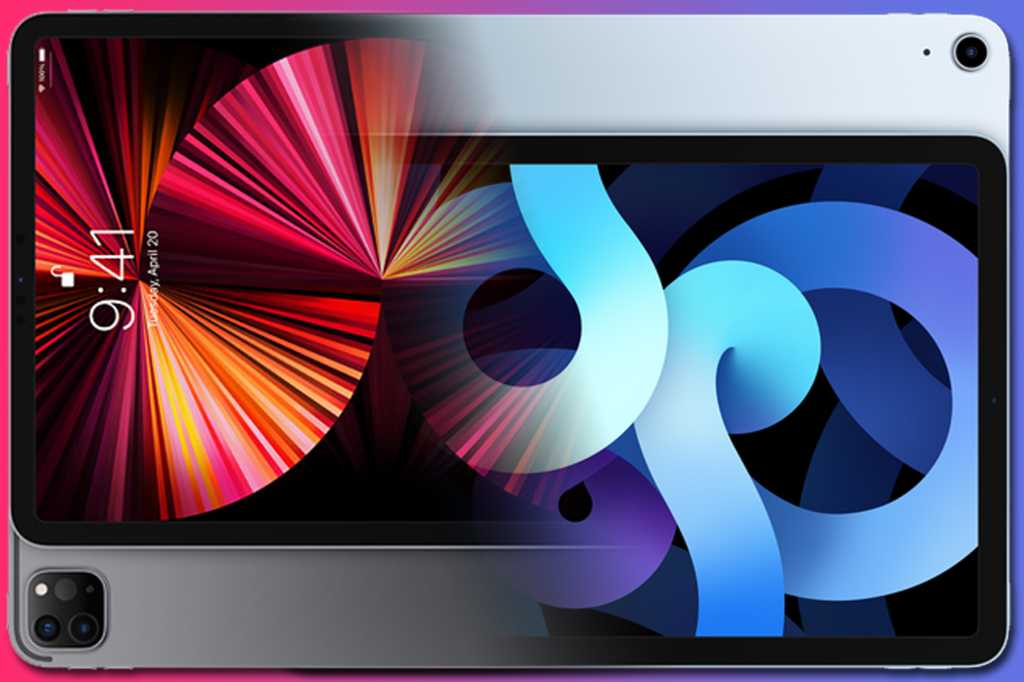 If you want an iPad, you have three basic choices: the basic 10.2-inch iPad, the more expensive iPad Air, or the even more expensive iPad Pro. But if you have a few dollars to spend, the choice is even simpler. The standard 10.2-inch iPad is the budget option, with an aging design (big bezels, home button, Lightning port) and older processor. And the brand new 12.9-inch iPad Pro starts at a whopping $1,099 and is geared toward only the most demanding of users.

So if you want the most tablet without breaking the bank on a $1,099 12.9-inch iPad Pro, you have just two options: the $599 iPad Air and the $799 11-inch iPad Pro. We used to recommend the iPad Air unequivocally for bringing the best of the iPad Pro at a much more affordable price. But Apple just upgraded the iPad Pro, and the improvements in the 11-inch model make it a serious contender for the best mid-tier iPad. We already know the iPad Pro has superior features and specs, but do those things make it better enough to justify the $200 price difference?

Before we start the matchup, let’s have a weigh-in and see how they match up on paper.

The iPad Air and 11-inch iPad Pro are almost exactly the same size and weight (though the Air is just a little bit lighter). In fact, the dimensions are so similar that they can both use most of the same cases, covers, Magic Keyboards, and so on. Only cases that have specific camera cutouts for the single iPad Air camera won’t fit on the iPad Pro, which has a squarish camera area with multiple cameras, but iPad Pro cases will fit fine on the Air (though they look a little weird).

With nearly identical shapes, they also have nearly identical designs with one main exception: the color. The iPad Pro comes in standard silver and space gray, while the iPad Air has a more whimsical array of colors to choose from: rose gold, green, sky blue, in addition to silver and space gray. You’re also getting ever so slightly smaller bezels on the iPad Pro, but it’s not something you’re going to notice.

Our pick: When it comes to size and weight, this is a complete tie. The designs are basically identical as well. So it comes down to color. If you want blue, green, or pink, you’ll need to get the Air (or a case for the Pro).

The 11-inch iPad Pro has a slightly bigger display than the iPad Air. We’re really splitting hairs here—it’s one-tenth of an inch. The resolution is the same—264 pixels per inch—but the iPad Pro has just slightly slimmer bezels around the display, giving it room for a few more pixels. Both displays also have True Tone and a wide P3 color gamut and follow Apple’s “liquid” retina design, meaning the corners of the screen are rounded to match the device itself..

The iPad Pro’s display is definitely superior, though. It’s brighter, with a max brightness of 600 nits compared to the Air’s 500 nits. But the big benefit is ProMotion, which lets the display run up to 120Hz for smoother motion and lower latency, especially when using the Apple Pencil. The difference is palpable when switching between devices, and once you’ve tried the Pro, it’s very hard to go back.

Our pick: The extra brightness isn’t a huge deal, but ProMotion is really nice and helps justify the higher price of the iPad Pro.

Apple has never skimped on the power in its higher-end tablets, so the iPad Air has the same A14 chip you’ll find in the iPhone 12. It’s great and will be great for years to come. The iPad Pro has the much-more-powerful M1, which is basically like the A14 with double the high-performance CPU cores, double the graphics cores, and double the memory bandwidth. It’s the same processor you’ll find in the MacBook Pro and iMac, and is easily the fastest mobile system-on-chip ever made.

The storage performance is faster on the Pro, too. The iPad Pro has 8GB of RAM compared to 4 in the iPad Air, and if you get the 1TB or 2TB storage option, that jumps to 16GB. That’s way more memory than Apple has ever put in a tablet, and it should make a palpable difference in multitasking and app switching.

Our pick: The A14 is more than enough power for a tablet, but the M1 and higher RAM clearly makes the Pro a lot more powerful and worth paying more for if you have a need for speed.

The battery capacity is nearly the same in both iPads, around 29 watt-hours. Apple lists similar battery life specs: Up to 10 hours of surfing the web on Wi‑Fi or watching video, 9 hours when on cellular, essentially the same for every iPad ever made. We haven’t yet tested the 11-inch iPad Pro’s battery life, but we know the M1 chip can be more power-hungry than the A14 when stressed, and ProMotion has a battery cost when your display is running at 120Hz.

Our pick: Either tablet will last you through hours and use. For the most part, we expect battery life to be similar in basic tasks, but when pushed to the limit, the iPad Air will probably last a bit longer than the 11-inch iPad Pro.

Our pick: With iCloud Photos, iCloud Drive, Apple Music, and Dropbox, most users don’t need more than 256GB of storage in an iPad, but if you do lots of work with 4K video or high-res photos, the option for higher storage is nice. For more important is that the starting storage is twice as big on the iPad Pro, and 64GB might be a little small for all of the apps and games you’re going to download.

Like the iPhone, the iPad Pro uses Face ID, which uses the True Depth front camera to unlock the tablet and authenticate purchases and passwords. The iPad Air is the only Apple device to have a Touch ID fingerprint sensor built into the side button. Both are easy to set up and use in their own way, but Apple says the odds of spoofing Face ID is approximately 1 in 1,000,000 vs 1 in 50,000 for Touch ID.

Our pick: Touch ID is plenty good, but there’s no doubt that Face ID is usually the faster and easier way to authenticate, enter passwords, and unlock your device.

On the rear of the iPad Air, you’ll find a 12MP standard wide-angle camera. On the iPad Pro you’ll find the same camera, plus a 10MP Ultra Wide camera and a LiDAR sensor for better AR positioning. Image processing between the M1 and A14 are basically identical. We don’t think you’ll be taking too many pictures with either of these somewhat awkward cameras, but if you want to, the iPad Pro has a clearly superior array.

More practical is the difference with the front camera. On the iPad Air, you get a capable 7MP camera that does 1080p FaceTime calls, but the iPad Pro has a new 12MP camera with an Ultra Wide lens, giving a far more expansive view. It supports a new feature called Center Stage, which pans and zooms to keep you the subject (you) in the frame. And because it uses the TrueDepth sensor for Face ID, it also supports portrait mode and Apple’s Animoj/Memoji.

Our pick: Both the rear and front cameras are better on the iPad Pro, but the big winner is the selfie cam.

The iPad Pro has decent sound from its two-speaker stereo setup, and a dual microphone array. It works fine, but it’s nothing special. The 11-inch iPad Pro, on the other hand, has four speakers and five microphones that Apple calls “studio quality.” We don’t know if we trust that moniker, but it’s almost certain that the iPad Pro will produce better recordings and higher-quality audio playback.

Our pick: We’ll need to do testing, but the Pro should bring superior sound and recording.

While the iPad Air dropped the Lightning port in favor of USB-C, which we love, the 11-inch iPad Pro takes it a step further. Its USB-C port supports USB4 and Thunderbolt, which means you can connect to all sorts of gear including high-end monitors, including 4K displays. The port is the same, but if you want to use high-end peripherals, you’ll need to make sure you have the right cable. Both models support the new Magic Keyboard—though the camera cutouts fit a little nicer on the 11-inch Pro—as well as the 2nd-generation Apple Pencil.

Our pick: Thunderbolt might not be something you need now, but it’s worth the investment. Over the years, there’s a much better chance that the devices you buy will work to their full potential (or at all) with the iPad Pro’s Thunderbolt port over the iPad Air’s standard USB-C charging port.

Both iPads have Wi-Fi 6 with MIMO, simultaneous dual-band, and speeds up to 1.6Gbps, so they’ll work great at home. You also get Bluetooth 5 for AirPods and other wireless devices. But if you opt for the Wi-Fi + Cellular model, the iPad Pro supports 5G, while the iPad Air supports 4G LTE. As we learned with the iPhone, 5G is way faster, but the networks aren’t nearly as robust as the LTE ones, and it comes at a premium, $200 versus $130 on the iPad Air.

Our pick: You should consider carefully whether you really need cellular access on your iPad—using your iPhone as a wireless hotspot works extremely well. But if you want the convenience of wireless connectivity wherever you go, the iPad Pro’s 5G modem is a good investment, even at a higher price.

If you asked us before April 20 whether the iPad Pro was worth the cost over the 11-inch iPad Air, we’d answer with an unequivocally no. Not anymore! The 11-inch iPad Pro carries a starting price that’s $200 higher than the iPad Air, but just look at how much more you’re getting:

Our pick: The upgrades might not all matter to your day-to-day use, but taken together it paints a picture of a clearly superior product, one that easily justifies its $200 higher price tag. If you just don’t think you need any of them, there’s no reason not to save a little money and go for the iPad Air, but the 11-inch iPad Pro’s expense is now more than justified, if not now then certainly in a year or so. With one fell swoop, Apple restored the 11-inch iPad Pro to its rightful position at the top of the tablet heap, a position its unlikely to relinquish for many years.