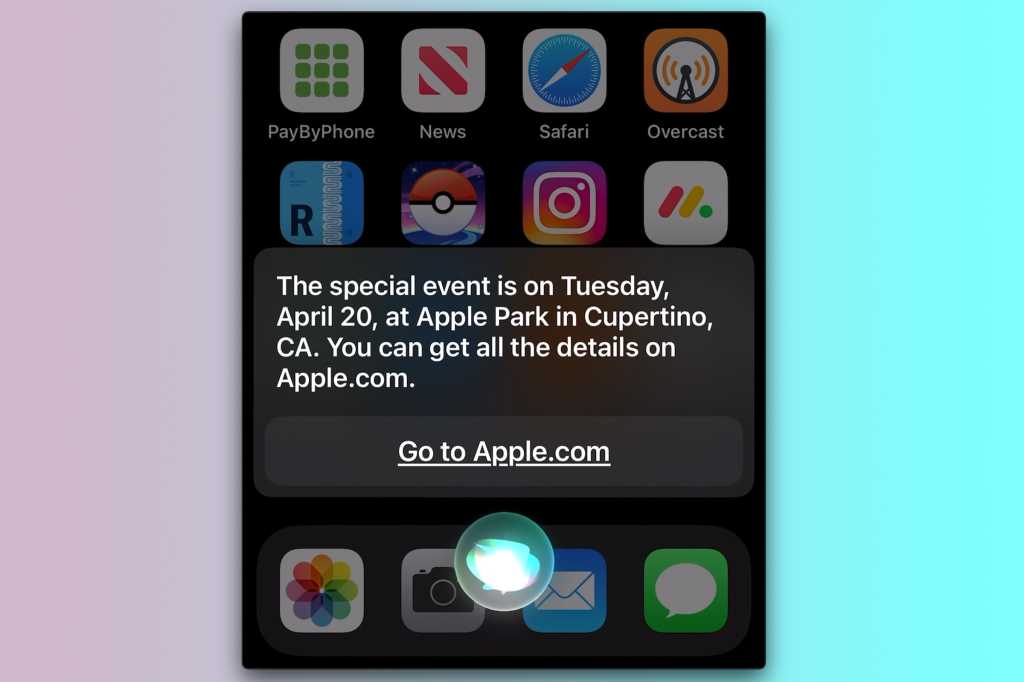 Update 4/13: The Spring event has been announced and will be held April 20.

Another rumored product launch has seemingly come and gone, and we don’t know what to think anymore. And someone on Apple’s Siri team may be having fun at our expense.

As first spotted by MacRumors, Siri was responding to some queries with a very curious answer Tuesday morning when asked, “When is the next Apple event?” Instead of the standard, “You can get all the details about Apple events on Apple.com,” Siri was telling some people—including our own Roman Loyola—that “The special event is on Tuesday, April 20, at Apple Park in Cupertino, CA.” If true, that would mean invitations are likely going out today or tomorrow.

This marks yet another chapter in the spring event saga that was supposed to be held in mid-March, then late March, then April, then not at all, and now April again. There are numerous factors that could be causing delays, but we don’t really know what to believe anymore.

As far as what could be released, well, that’s a mystery as well. We’re fairly certain that iPad Pros will make an appearance—with a mini LED display, faster A14X chip, and a better camera—but other than that, we’re not sure. The most persistent rumors have been about AirTags, but after Apple launched an expansion of its Find My program without mentioning its own trackers, we’re not so sure. AirPods have also been crunching the rumor mill, but the most recent reports suggest they will be delayed until the fall. The iPad mini could also make an appearance as well as new M1 iMacs, but at this point out head is just spinning.

All we do know is Apple has never waited this long into a new year to announce a new product, so we’re obviously getting antsy. But we’re confident that something’s coming, at some point soon.