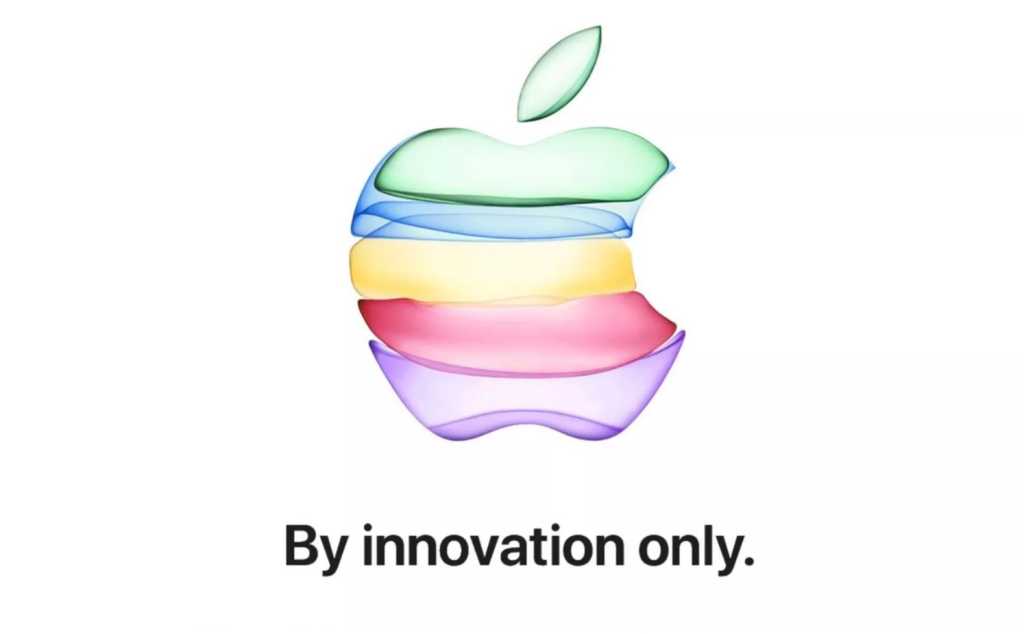 Apple sent out invitation to its big September event, and as predicted, it will be held at 10 a.m. Pacific on September 10 in the Steve Jobs Theater on the Apple Park campus in Cupertino, California.

The event invitations were accompanied by a glossy and colorful Apple logo image together with the tagline, “By innovation only.” These images and taglines often give us little hints about what is to be announced, but this one is a little obtuse.

(We should mention, too, that the colors on the Apple logo are not the same as the classic rainbow Apple logo: the orange stripe is missing, and the colors are out of order.)

Apple usually holds its September event, at which it announces new iPhones and Apple Watches (among other things), on the second Tuesday or Wednesday of September. As Wednesday is September 11, it seemed an unlikely choice, leaving September 10 as most likely date.

Apple always announces the new iPhones at these events, and since its inception has announced a new Apple Watch as well. We expect the same thing this year. The rumors for the so-called iPhone 11 (whose real name will be revealed at the event) point to a trio of devices similar to last year’s iPhone XR, XS, and XS Max. This year’s analogues to those are reported to be the iPhone 11, iPhone 11 Pro, and iPhone 11 Pro Max.

We haven’t heard much about a new Apple Watch, but Apple has always announced new models at its September event, and we expect an Apple Watch Series 5 is likely this year, too.

The company may have other surprises in store. There are rumors of a new 10-inch iPad that replaces the existing 9.7-inch models, a high-end 16-inch MacBook Pro with an all-new design, and Tile-like trackers to help you find your stuff. Any of these could make an appearance, or they could be announced at an event in October or even next year.