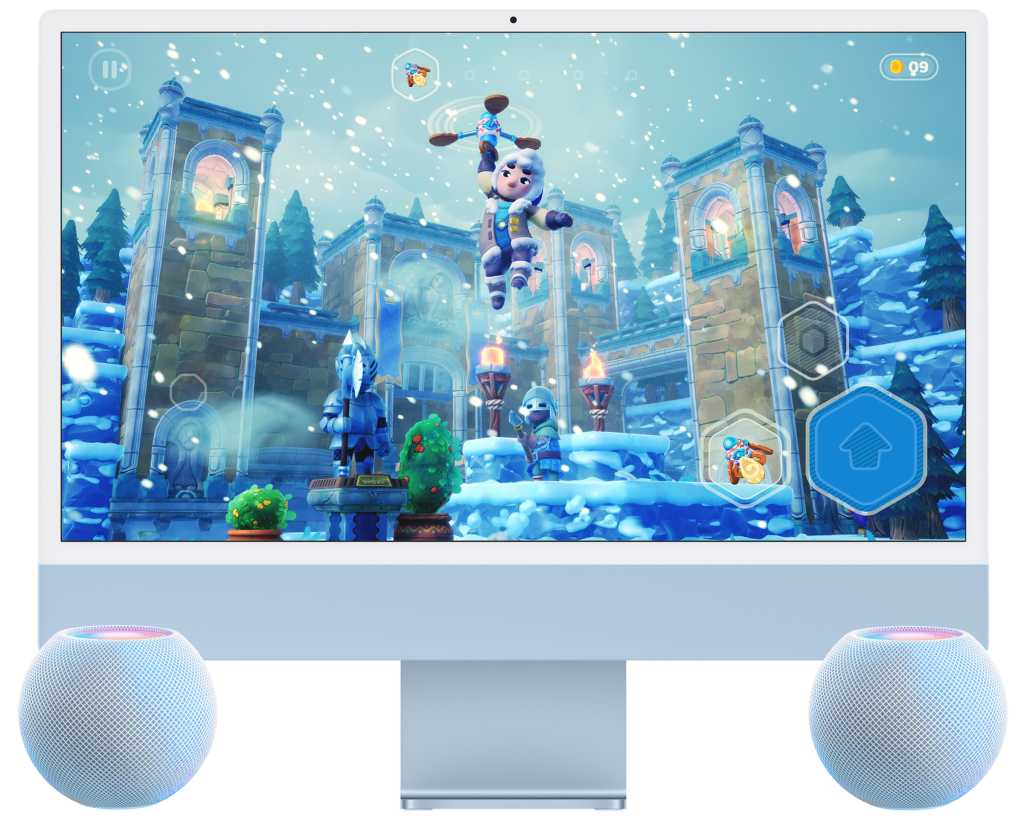 Ever since Apple abandoned the Mac speaker game when it stopped selling the stereo Pro Speakers in 2004, my Macs have never quite been the same. Sure, there are plenty of decent third-party options, but for those of us waiting for a modern update to Apple’s greatest stereo speakers, it seemed like we’d be waiting forever.

When Apple released the HomePod mini last year, I thought my prayers had finally been answered. Unlike the original HomePod, which was expensive and not at all fit for a desk, the mini is small enough to fit under a monitor or an iMac, and affordable enough to buy in pairs. They even resembled Apple Pro Speakers.

There was just one inexplicable problem: the Mac’s system audio didn’t support stereo pairing, the mini’s best feature. While the Home app lets you link two HomePods as a stereo pair, Apple always allowed system sound to output to a single HomePod. Frustratingly and confusingly, it would only allow a stereo pair to work with certain apps, such as Music or TV, but wouldn’t let you select it from the volume control in the menu bar. It was possible to get it done using the Audio MIDI app, but that ‘s a workaround and not a solution. When macOS 11 launched without support for AirPlay to a stereo HomePod pair, I had basically given up hope.

With macOS 11.3, there’s finally an easy way to set up a stereo HomePod pair to play system-wide audio on your Mac. Now your Mac will finally recognize a HomePod stereo pair in the Sound preferences so everything plays through it, no matter the source. But while that solves one problem that we never should have had in the first place, it doesn’t fix everything that ails audio on the Mac.

All work and no AirPlay

AirPlay is a simple and elegant solution for playing audio from an Apple TV or iPhone, but when it comes to a Mac, it’s not nearly as pleasant of an experience. While macOS Big Sur 11.3 fixes the stereo issue, buying a pair of HomePod mini speakers and hooking them up to your Mac is still nowhere near as seamless as it is with a pair of AirPods. It’s bad enough that Apple took months to properly deliver its own wireless audio system to the Mac, but Apple also is seemingly ignoring major issues that sully the experience.

For one, there’s a delay. Depending on the app and numerous other issues, it can be as long as two seconds, so if you’re watching a movie or video, playing audio through the HomePod is not ideal. I’ve tried to use Airfoil 5 to fix it, but the delay is so sporadic and inconsistent that I need to constantly fiddle with the sliders to the point where it’s just not worth trying most of the time. (And even more confounding: sometimes the sound syncs perfectly fine without any adjustments.)

Even when the sound does sync, AirPlay on the Mac just isn’t reliable, with the sound inexplicably cutting out at times. I’ve tried restarting, unpairing, and quitting apps—and most recently, keeping tabs on my memory usage—but the problem persists. Like the lag, it’s random enough where I can’t quite put my finger on what’s causing it, and it doesn’t matter if I’m using AirPlay in an app or the main system. And don’t get me started on my Mac actually recognizing my HomePod mini speakers as the default sound output on my Mac.

What’s most frustrating is that AirPlay isn’t a bad system—it’s just bad on the Mac. Between the playback issues and the various apps fighting each other for control, I’m ready to give up. A pair of HomePod speakers should be the ultimate audio system for an iMac or MacBook, but instead, it only demonstrates how much Apple has stopped caring about audio on the Mac.

The 24-inch iMac that released last week could have broken new ground for audio on the Mac. With macOS big Sur 11.3 launching as the default OS, Apple could have spotlighted AirPlay 2 and stereo pairing with a special-edition HomePod mini in matching iMac colors.

But that’s not where Apple’s attention is now. Sure, Apple has put “a six-speaker sound system that produces a massive sound stage with strong, articulate bass and crystal-clear mids and highs” inside the iMac, but it’s still just an internal speaker system, and that’s not what gamers, movie buffs, and music lovers want. They want external stereo speakers, and Apple makes it extremely difficult to find a pair that works well. We don’t want a HomePod inside our Mac, we want a pair of speakers outside it that works seamlessly, looks great, and amplifies the audio experience.

Apple Pro Speakers were included with the Power Mac G4 Cube and were a $59 indispensable accessory for the G4 iMac. The only option for the iMac is a pair of white HomePod minis that aren’t even offered at checkout. And since Apple put the 3.5mm jack on the side of the iMac, you can’t even hook up a pair of wired speakers without it looking terrible. I was looking forward to macOS 11.3 as the solution to my Mac’s audio woes. Instead, I’m only reminded that Apple just doesn’t care.