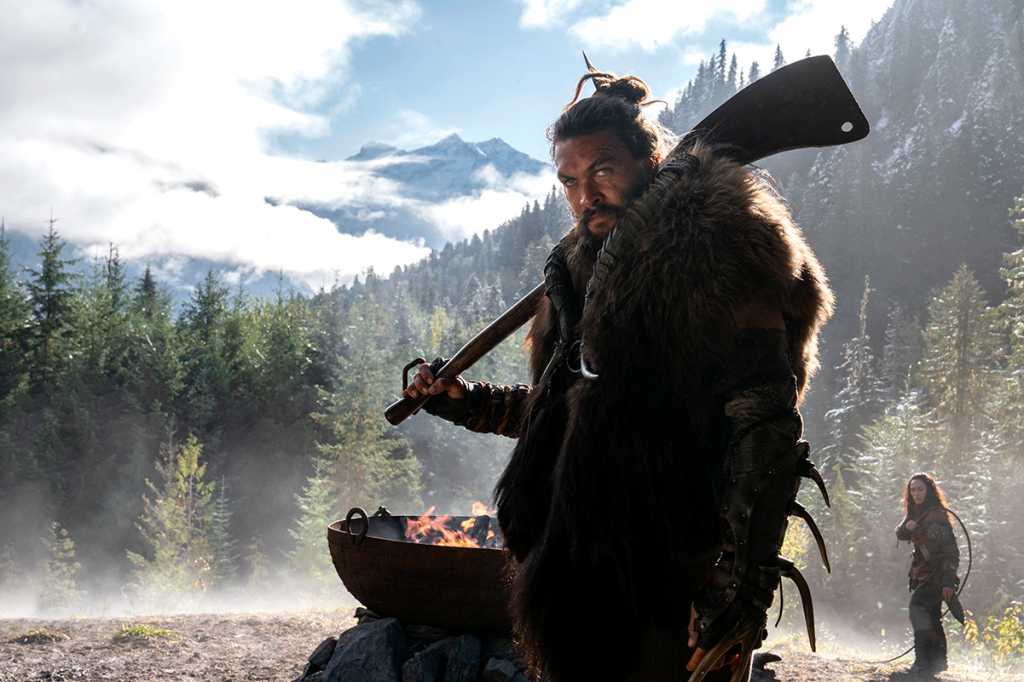 See often gets called Apple TV+’s Game of Thrones, but it has a lot more in common with Kevin Costner’s 1995 flick Waterworld. Both are post-apocalyptic visions of futures where humans only learn to cherish and mend the land once it can no longer be seen. In Waterworld, that’s because the ocean drowned all the continents. In See, it’s because people no longer have actual vision and can’t see the surrounding mountains and forests. Hundreds of years ago, a deadly virus robbed the human race of sight and reduced our numbers to a couple million people.

Oh, and both shows are kind of silly.

See, in fact, feels like it grew out of a pub chat in which creator Steven Knight asked, “Would the blind leading the blind actually be so bad, man?”—and, to its credit, See has the guts to say, “No.” It’s actually fun to see how See envisions how humans might adapt. (Forgive the puns. It’s so tempting.) Ranged weapons basically don’t exist. Written correspondence consists of knots tied into cords. People design villages in neatly gridded patterns in order to easily navigate them. All fine and dandy so far.

That said, See demands more than the usual suspension of disbelief expected of any fan of science fiction and fantasy, sometimes to the point of distraction. Why, for example, do people still decorate themselves with feathers and makeup when no one else can see it? And wouldn’t most decorations be based on touch? (To be fair, See acknowledges that possibility with some textured facial tattoos.) How are people still able to ride horses? Riding a trained horse is one thing, but training a young, unridden colt is quite another. How are flesh wounds dealt with? They must be as common as air in a world where people spend their days running around in untamed wilds and where bears and lions stalk humans as prey.

The list goes on. Some viewers won’t be able to get past this. For others, though, See’s messages about human nature and ecology should outweigh its goofier parts, although it would be a mistake to claim Apple’s new show approaches anything like the complexity of the first few seasons of Game of Thrones.

This is the tale of Baba Voss (Jason Mamoa), who takes on a lost woman named Maghra (Hera Hilmar), and she in turn gives birth to two children with the power to see. “Power” is the right word, too, especially in this primitive society where the pitiful remnants of humanity view the ability to see as a form of witchcraft and speak of light in the way we normally speak of darkness.

Hilarity doesn’t ensue. (At least Waterworld had the decency not to take itself so seriously.) See aims to show that even in such dire circumstances—in which you’d think we’d all learn to get along for the sake of easier and happier lives—humans still act like massive jerks. The first episode’s first scene even kicks off with a battle, complete with people blindly hacking at each other with weapons made of “god bone”—or metal. (Friendly fire must be a massive problem in these situations.) We see executions and betrayals. One punishment involves jabbing rods into someone’s ears, the better to rob them of another crucial sense. Yes, Game of Thrones fans, there’s even incest, and it’s made all the more scandalous because the absence of sight lets the offenders grope and kiss in public without anyone to see them.

A lot happens in these three episodes, as you might have guessed, and one of See’s flaws is that it doesn’t linger on any one character long enough for us to care about their motives. In fact, almost two decades pass by the end of the third hour.

That’s not as much of a problem as it could be, though, as See is always more concerned with the questions raised by its premise. At one point, Maghra tells a particularly beautiful fable that positions vision as the least noble of senses, and for good reason. See also takes cues from similar stories like Stephen Vincent Benét’s “By the Waters of Babylon” by suggesting humankind will only seek to destroy itself again if it is freed from constraints like the ones seen here.

And there’s always the breathtaking unspoiled wilderness of British Columbia that serves as See’s backdrop (although the script claims the action takes place in a considerably more mundane locale). It serves as an indictment of humanity in its own right: All these horrors unfold while the perpetrators remain ignorant of the staggering beauty surrounding them. And, See proposes, the surrounding world is a better place for it.

All this is enough to make See worth a watch—or at least worth a chance. But it’s unfortunate that See seems to suffer from the same “Rule of Three” afflicting Apple TV+’s other launch shows: It doesn’t really take off until the third episode. Everything up until then is either world-building or exposition. Only then do the pieces fall into play and the plot moves forward. This patterns so predictable at this point that it’s probably safe to assume Apple’s decision to release three episodes at once involved more than just riffing off Hulu’s model.

But does that mean Apple’s occasionally outlandish sci-fi saga is worth watching until the end? Well, we’ll just have to wait and see.