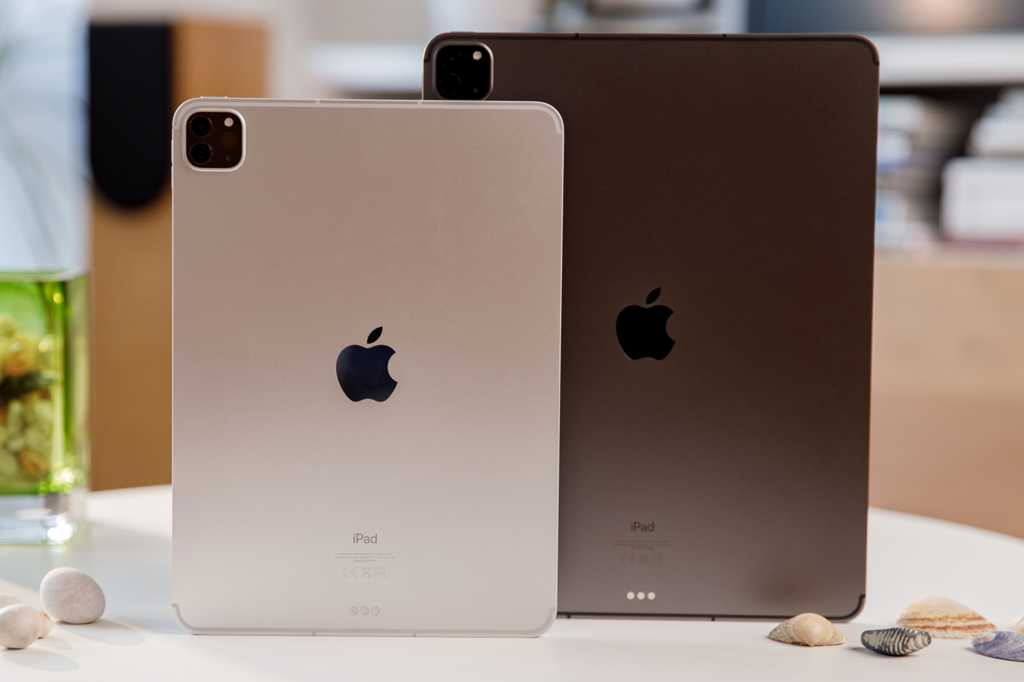 Since the iPad Pro debuted in 2015, Apple has offered two sizes of its high-end tablet. One is about the size of a regular iPad or iPad Air (first 10.5 inches and now 11 inches), and one a giant 12.9-inch version, a size you can only get in the iPad Pro.

The two sizes have traditionally been essentially the same, with the larger version costing $200 extra for more screen. The choice was simple: Pay more for If you want a bigger display. But the new M1-powered iPad Pro is a different animal. For one, the price gap has stretched to $300, but that’s because the 12.9-inch model has a really significant difference—a new HDR display with mini-LED backlights. Here’s how the two Pros stack up and whether it’s worth it to spend so much money on the flagship iPad.

There are two differences when it comes to the display: the size and the brightness. While the 11-inch iPad Pro has Apple’s Liquid Retina LCD, the 12.9-inch model introduces what Apple calls a “Liquid Retina XDR” display to the iPad line. It’s very similar to Apple’s Pro Display XDR in that it uses an array of thousands of micro-LED backlights arranged in 2596 lighting zones to give it amazing brightness and contrast.

Just to be clear, XDR isn’t actually a thing—it’s just Apple’s marketing name to try to make its HDR displays sound better than regular HDR. But it makes a strong case for superiority: a 1,000,000:1 contrast ratio, P3 wide color gamut, and full-screen brightness of 1,000 nits (with peak brightness of 1,600 nits)—not to mention True Tone, and ProMotion—make this one of the best HDR displays you can get anywhere. It’s right up there with the best 4K TVs.

While the 11-inch model can handle HDR video content, its peak brightness of 600 nits doesn’t really produce enough brightness and contrast to make HDR look like HDR unless the brightness is amped up and conditions are ideal. With the 12.9-inch iPad Pro, that won’t be an issue. Video content will look stellar and images and apps will be bright, crisp, and incredibly detailed. As Apple describes it, “Even the most detailed HDR content with the finest specular highlights — like galaxies and action movie explosions — are more true to life than ever.”

The display is the real reason that the 12.9-inch model now costs $300 more than the 11-inch model, instead of $200 as in years before, starting at $1,099. If you want a 12.9-inch screen, however, we recommend looking for a deal on an older one first. The XDR screen is definitely fantastic, but so is the previous 12.9-inch LCD display. When comparing them side by side, it’s very hard to see a difference, even when watching 4K HDR content. Part of it is the size, part of it is Apple’s history of making excellent iPad displays, but the 12.9-inch iPad Pro’s XDR Display isn’t the eye-popping upgrade we thought it would be.

Our take: Bigger is usually better, but here you might be better off downgrading to the 11-inch screen and spending your savings on a Magic Keyboard.

Like previous years, the two tablets have the same processor (Apple’s M1), wireless connectivity (Wi-Fi 6 + 5G), and even the same estimated battery life (about 10 hours on Wi-Fi). That is to say, both iPads are the very best iPads Apple has ever made. In our speed tests, the M1 processor is significantly faster than the A14 in the iPhone 12 and iPad Air, and is basically on par with a MacBook Pro, just an insane amount of power for an iPad.

The same goes for graphics, where the M1 chip really shines. It’s sure to handle any game you play now and for years and updates to come.

Elsewhere, the 2021 iPad Pro is the only tablet to get 5G support (full sub-6Ghz and mmWave 5G connectivity) instead of LTE on the other iPads. But like the processor, it’s not terribly necessary. In our testing, we got very good speeds using Verizon’s nationwide 5G service, but we also got similar speeds when tethered to an iPhone 12 connected to the same 5G network. So for the extra $200 cost, we’re not sure it’s worth it.

Our take: There’s no denying that the new iPad Pro is ridiculously fast. We’re just not sure you actually need all that speed for the things you do on an iPad.

The new iPad Pro is Apple’s first tablet with RAM listed in the tech specs. And it has a lot more than before. While the previous generation iPad Pro had 6GB of RAM, the new model has either 8GB or 16GB, depending on the storage. You get 8GB of RAM with 128GB, 256GB, or 512GB storage, and 16GB RAM with 1TB or 2TB storage. The extra RAM adds an extra $200 to the price, and we’re not really sure what benefit there is at the moment.

In iPadOS 14, apps have a hard 5GB limit no matter whether the tablet has 8GB or 16GB of RAM, although most apps don’t come anywhere near that anyway, at least not yet. In iPadOS 15, Apple is allowing developers to request more RAM for apps, which could open up the iPad to bigger and better apps, such as layer-intensive apps like Procreate, but most apps will remain capped.

Our take: The iPad Pro ups the RAM in a major way over previous iPads, which have never had a problem running or switching apps. We think 8GB is plenty and wouldn’t recommend paying for a gig of storage, no matter which iPad you choose to buy.

The 1TB and 2TB tiers are a lot more than before. The reason why is because of the RAM. Because the new iPad Pro has an M1 processor, it also has 8GB of RAM, which is already more than any iPad has ever had before. As noted above, if you get the 1TB or 2TB model, you’ll also get 16GB of RAM, which jacks up the price by another $200. We’re not sure we’d recommend that much RAM or storage in an iPad, but if you can afford it, go for it.

Our take: 128GB of storage is probably enough with iCloud Drive and other online storage plans.

Other than the chip and the screen, the other major revision in this year’s iPad Pro is the front camera. Apple has upgraded the hardware from a ƒ/2.2 7MP camera to an ƒ/2.4 12MP ultra-wide one with 2x optical zoom out. That makes for a huge difference in quality and will dramatically increase the quality of your FaceTime calls, especially after the new features arrive in iPadOS 15.

Apple has also introduced a new feature called Center Stage that’s exclusive to the iPad Pro (for now). When you’re on a FaceTime call, the camera will follow you as you move and zoom in and out to keep you in the frame. It’s a nifty feature that’s well worth it if you make a lot of video calls.

Our take: Either model will greatly improve your FaceTime experience, no matter which iPad you’re upgrading from.

11-inch vs 12.9-inch iPad Pro: A tiny difference in thickness

One small detail to note about the 12.9-inch iPad Pro is that the new display makes it ever-so-slightly thicker than the previous model. It’s only a 0.5mm difference, two-hundredths of an inch, but it’s there. It’s enough that Apple had to tweak the latest Magic Keyboard a little bit in order to close neatly. Apple says you can use the Magic Keyboard made for last year’s 12.9-inch iPad Pro since the other dimensions are the same, but it won’t be perfectly flush when closed. In our testing, though, we were able to use the new iPad Pro with last year’s Magic Keyboard just fine.

Our take: The thickness won’t matter in day-to-day use, so don’t let that affect your decision. However, the Magic Keyboard is an essential accessory for the iPad Pro, but if you can get last year’s model for cheaper, it’ll work with the 12.9-inch iPad Pro just fine.

We already established that the extra $300 price gap this year might not be justified by the 12.9-inch mini-LED display, which is good but not that good. but you’re probably not going to pay only $300 more. Some accessories cost more for the larger model than the smaller one.

The 11-inch iPad Pro is a fantastic machine and one of the best tablets ever made, but if you decide to get the 12.9-inch iPad Pro, you’re making an investment. It’s not just the extra expense, but also a decision to get the best, most luxurious tablet Apple has ever made. We don’t think you’re going to necessarily regret the decision, especially if you can handle the sticker shock, but if you want to make the smartest purchase, either an 11-inch Pro or a 2020 12.9-inch iPad Pro is the way to go.