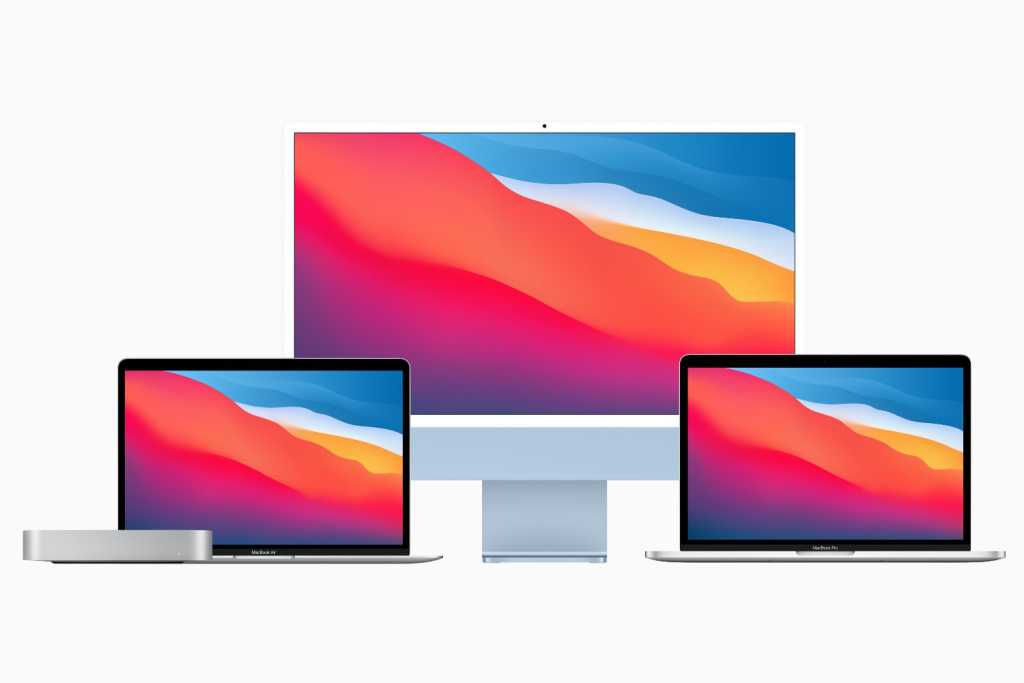 The rollout of Apple silicon continues with the introduction of the 24-inch iMac. Now there are four different Macs with Apple’s M1 system-on-a-chip (SoC) at the heart of each model: two laptops and two desktop computers. That means you have more choices, and that’s good—but that also means there are now more designs, features, specifications, and prices to consider, which can make picking the right one tricky.

To help you decide with M1 Mac to buy, let’s break down each model and look at each of their similarities and differences. If you know for sure that you want an M1 Mac laptop and not a desktop computer, take a look at our M1 Mac laptop guide that compares the MacBook Air and 13-inch MacBook Pro. Plus Apple still sells Macs with Intel processors, so there’s a lot to consider before you plunk down a thousand-plus dollars on a new Mac.

The four M1 Macs that Apple sells can be easily divided into laptops and desktop computers. The differences are obvious—skip to the next section if you don’t need it spelled out for you. Read on if you want more information to help you decide.

Laptops. Apple sells two M1 Mac laptops, the MacBook Air and 13-inch MacBook Pro. Laptops are all-in-one computers, with a built-in display, keyboard, and trackpad. Mac laptops have a built-in battery that you charge by plugging in a power adapter to one of the Thunderbolt/USB 4 ports. You can charge the battery, unplug it when you travel, and then use the laptop on battery power at a remote location.

Mac laptops tend to be a slower than Mac desktop computers because the laptops need to do more to maintain a comfortable temperature. But with the M1, the performance gap isn’t as big as it used to be with Intel processors, which we’ll outline below. Even before the switch to Apple silicon, Mac laptops provide enough performance to be used as a primary computer both on an office desk and on the go.

Desktop. Apple offers two desktop M1 Macs, the Mac mini and the 24-inch iMac. These computers are designed to stay on a desk and are not generally considered to be mobile devices. The Mac mini requires you to provide a display and input devices, which you can also buy at the point of purchase from Apple or use your own. The iMac is an all-in-one computer with a built-in display and it comes with input devices.

The desktop M1 Macs are faster than the M1 laptops, but not by a lot in general use. A desktop has a speed advantage with work that is very processor intensive, such as with pro apps like Final Cut, Logic Pro, and Xcode. Laptops need to be more attentive to the running temperature and will slow down if it starts to get too hot. Desktops, meanwhile, can run at a higher temperature for a longer period.

Our take: Laptops are popular and with good reason. They have enough processing power for most users, are easy to travel with, and have the features most people need. A laptop might seem like the obvious choice, but if you’re not going to be traveling much, Apple’s M1 desktop computers are ideal for users who need the most processing power and an extensive setup with external hardware. If you need a monitor, look at the iMac, if not the Mac mini is a fantastic option.

All four Macs use the M1 SoC, which has an 8-core CPU with four perform­ance cores and four efficiency cores. Based on our testing of three of the four Macs released so far, it provides impressively fast performance, with similar results across all four models.

As of this writing, the 24-inch iMac had not yet started shipping. Apple said the iMac would start making its way to customers in the second half of May. We won’t be surprised if the 24-inch iMac posts Geekbench 5 scores similar to what has been posted by the M1 Mac mini, but we’ll update this post once we get our hands on one.

Here’s a look at the Geekbench 5 CPU results. The M1 laptops have scores that are lower than the Mac mini, probably because the laptops run a tad slower for temperature control. But the difference is really small—we’re talking about 1.5 percent—and in everyday use, you won’t notice a difference between the three.

Analyzing and comparing the graphics performance of the M1 Macs is a little more involved. The number of GPU cores varies based on the model. Here’s a look at what Apple offers in terms of GPU.

Below are the Geekbench 5 GPU results. The $999 MacBook Air and the $1,299 iMac have a 7-core GPU that’s slower than the other M1 Macs, but you probably won’t notice a difference in general everyday use. The difference is 9 percent between the two MacBook Air models, and higher compared to the MacBook Pro and Mac mini, so if your work is graphic-heavy, consider spending a little more on the 8-core model.

The 24-inch iMac has three standard configurations, starting with the low-end $1,299 model that has a 7-core GPU, and the $1,499 and $1,699 models with an 8-core GPU. We expect the $1,299 iMac’s 7-core GPU to be slightly faster than the MacBook Air’s 7-core GPU, while the iMac’s 8-core GPU performance could be similar to the Mac mini. We’ll update the performance chart with iMac data as soon as possible.

Our take: If all you care about is getting the top-performing M1 Mac, then the Mac mini is for you. If you can wait, hold off until results from the 24-inch iMac are in, but we expect they’ll be similar. The 13-inch MacBook Pro’s performance is very close to the Mac mini, so it’s a worthy contender as well, but if you want the best price-to-performance ratio, the Mac mini is the way to go.

All four of these Macs have 8GB of “unified memory” in their standard configurations. (If you don’t know, memory or RAM is used by a computer when it is doing work and processing data. Having a higher amount of memory can help performance.) If you think 8GB isn’t enough, you have the option to upgrade to a maximum of 16GB of memory for an additional fee. However, Apple changed the way memory is used in the M1 compared to Intel-based Macs, and most regular users will be fine with 8GB.

Then there’s storage, the place where files and software is kept. Apple uses solid-state drives (SSDs) in its M1 Macs, offering 256GB to start and 512GB at the higher-priced models. You can also configure your Mac with up to 2TB of storage.

Our take: Buy as much memory and storage as you can afford. Most people will be fine with 8GB of memory, but if you like to use professional apps and plan to keep your MacBook for a while, upgrade to 16GB. As for the SSD, if you rely on cloud storage such as iCloud, Dropbox, or Microsoft OneDrive, you can go with a smaller SSD, but remember, you need an internet connection to access those services.

Even as more external devices offer wireless connectivity, ports are very important. Ports offer faster connections than Bluetooth or Wi-Fi, and sometimes you might prefer (or have no choice) to use a wired connection. And of course, you probably have devices that you’ve had for a while that you use on your older Mac and want to use on your new one.

All of Apple’s M1 Macs heavily rely on Thunderbolt/USB 4 ports—they each have two. A few other M1 Macs have additional ports. Here’s a quick look at the ports on each M1 Mac.

Our take: Because the Mac mini is often used in home entertainment centers, kiosks, servers, and other setups, it has more ports built in that are useful for such situations, such as gigabit ethernet and HDMI. All the other Macs will require an adapter to connect to non-Thunderbolt/USB 4 plugs, such as Apple’s USB-C to USB Adapter, or a Thunderbolt hub. So be prepared to shell out extra cash to be able to use your devices.

There’s a lot to consider when thinking about price, because the M1 Macs are different. But it helps to have the information in front of you and to call out what you’re getting in each machine. Here are the prices of the standard configurations for each M1 Mac.

Our take: The Mac mini is a nice combination of price and performance, but you must provide your own input devices and display, which could add to the price if you’re buying these new. If you like the iMac, we recommend the $1,499 model—the extra $200 spent over the entry-level model gives you a lot more features compared to the other Macs. The $1,249 MacBook Air does stand out—you get the same size SSD and the same M1 CPU and GPU configuration as the $1,499 13-inch MacBook Pro, which does have a better audio system, a slightly brighter screen, and the Touch Bar.

Whichever Mac you choose, get the best machine you can afford at the time of purchase—that means customizing the configuration to add more memory or storage. It will increase the price, but you can’t upgrade those components after you buy your Mac.