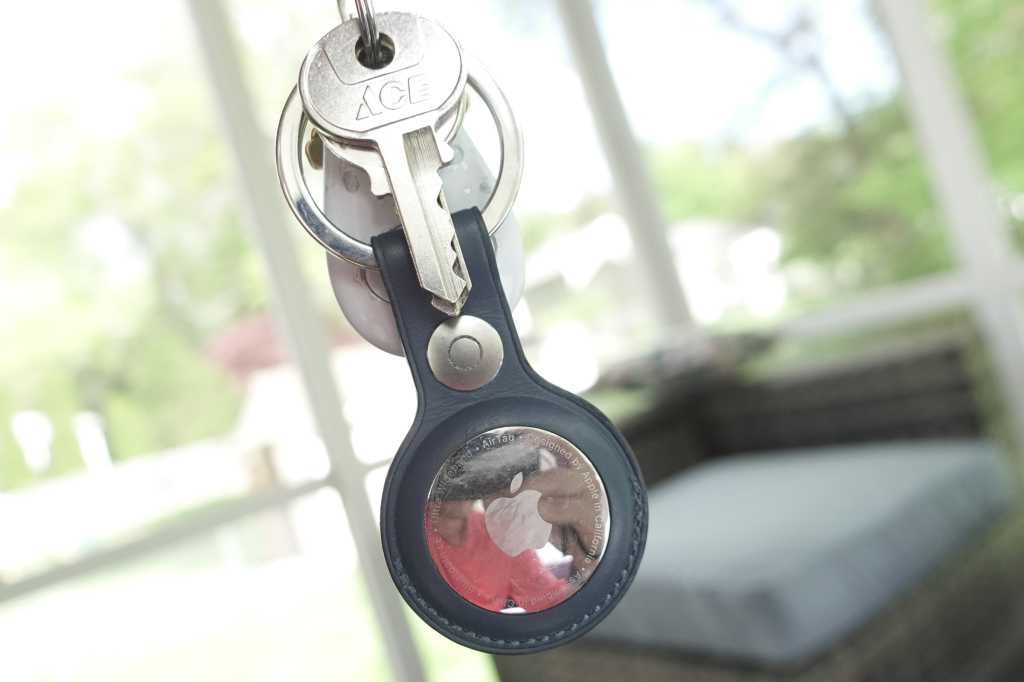 The AirTag is an excellent entry to the Bluetooth tracker market, with simple set-up, easy tracking, and good privacy—but it could be even better.

Apple’s new AirTag trackers are even smaller in person than they appear in pictures. Roughly the size of a half dollar coin or a button on an overcoat, the convex design makes it feel smaller than either of those things. And compared to the square Tile tracker, it’s downright puny.

Depending on what you want to use AirTag for, however, the size might not matter. Since Apple didn’t include a keychain hole anywhere on the AirTag, you’re going to need a proprietary dongle that could double (or in the case of the Hermes Luggage Tag, quindecuple) the price of the investment and turn it from an inexpensive impulse buy into an overpriced luxury accessory. The market will no doubt be flooded in short order with dirt-cheap tags and and key rings, but for now, your options are fairly limited and quite pricey.

It’s classic Apple—take something that’s existed for a while, make it nicer and just a bit more expensive, mix in a couple of new features and leave out a few others. But putting aside the frustrating issue of accessories and a few other quibbles, the AirTag is a nifty piece of tech and a fantastic expansion of the Find My service, particularly if you have an iPhone 11 or 12 with a U1 ultra-wideband chip.

The whole AirTag concept is built on simplicity. The tracker is ready to use as quickly as it pops out of its cardboard nest, with an AirPod-like setup process. Simply pull out the tab to activate the battery, wait for the box to pop up on your iPhone, and follow the short steps. It’s remarkably easy and makes Tile’s in-app setup, which requires multiple steps and taps, feel downright antiquated.

Apple has also managed to make competing trackers look clunky. While Samsung’s SmartTag and Tile’s Mate are hardly big, the minuscule AirTag is significantly smaller than either of them. It’s about the size of the Tile Sticker, which is limited to a 150-foot Bluetooth range (versus 400 feet on the larger Tile) and doesn’t have many of the AirTag features such as IP68 water resistance, a replaceable battery, and ultra-wideband support. To fit the amount of tech that Apple did into such a tiny device is extremely impressive.

The AirTag is the first Apple product in years to offer a removable battery. It’s extremely simply to do so—just twist the chrome side of the AirTag and the cover will pop off and the battery will come right out. It might actually be a little too easy. Australian retailer Officeworks stopped selling the AirTag due to the risk of kids swallowing the battery. That risk is probably quite low, but I’ll say this: It’s much easier to take the battery out of the AirTag than a SmartTag or Tile. That’s a feature, of course, but I wouldn’t be surprised to see Apple tweak the compartment in a future revision.

The AirTag is so svelte and elegant, it’s a shame you need to pop one into a dongle if you want to use it for its most common item: keys. Since Apple didn’t include a keyring hole like its competitors, you’re forced to buy an accessory for it, which kind of cheapens the whole appeal. Even Apple’s $35 Leather Key Ring, which is very nice and well made, doesn’t do the AirTag justice.

The chrome-and-white color scheme is reminiscent of the original iPod and it would look very sharp on a set of keys. AirTag probably isn’t the kind of device Apple users are going to obsess over, but I know more than a few Apple fans who would buy one for their keys as an ornamental tracker. In a key tag holder—even one of Apple’s pricey leather ones—it’s not nearly as stately.

Once AirTag is set up and attached to the thing you want to track, you can basically forget about the device itself. Its battery should last for at least a year, there won’t be any software updates, and you can’t actually do anything with it. All of the usefulness takes place in the Find My app.

Think of the AirTag as an insurance policy. It’s the kind of thing you don’t think you need until you do, and then you’re happy to have paid for it. When you lose something with an AirTag attached or associated with it, you can attempt to track it down in the Items tab of the Find My app just like you would with an iPhone or iPad. You’ll see a circle with an icon of the item you’ve selected at setup (keys, backpack, etc.) that will give you a general approximation of where it is (home, store, office, etc).

If it’s nearby, you’ll be able to tap a button to play a sound on the AirTag to help you locate it. It’s surprisingly loud, but if it’s nestled in a coach cushion or under a pile of blankets it might be tough to hear. If you have an iPhone 11 or iPhone 12, it won’t matter, because you’ll be able to use the U1 ultra-wideband chip to pinpoint the precise location of the AirTag.

It’s like a high-tech game of Hot and Cold—my wife hid my keys inside of the hood of her jacket and I was able to follow my phone’s prompts to find it within seconds using my iPhone 12 by following the prompts. It doesn’t do well with elevation, so if you have a two-story house, it might take a bit longer to find, and you need to be relatively close to the AirTag (within 20 or so feet) to get it to properly lock in on a signal.

If something is actually irretrievably lost, the power of the robust Find My network should be able to track it down. When Lost Mode is activated, the AirTag will lock so no one else can use it, and it will also let iPhone users nearby send out an anonymous signal to let you know where it is. You’ll also be able to display a message that anyone can display on their iPhone or Android device by tapping AirTag against the NFC sensor at the top of their handset. It will take them to a website that contains your message, phone number, and other details about the AirTag.

Apple has built an impressive layer of privacy into AirTag with end-to-end encryption, unique encrypted Bluetooth identifiers, and the aforementioned Pairing Lock when Lost Mode is enabled, but its vaunted anti-stalking protection isn’t quite all it could be. If you’re an iPhone user running iOS 14.5 or later, an unknown AirTag will display a message on your iPhone that says, “AirTag Found Moving With You,” but other phones won’t get a similar notification even if the AirTag is in NFC range. The AirTag will make a sound, but it currently takes three days to reach that point, which gives a theoretical stalker plenty of time to track their target.

AirTag wouldn’t be a first-get Apple product if it didn’t a) make an existing product easier and better, and b) have a few omitted and overlooked features. Beyond the aforementioned keyhole ring, there are plenty of little things that would make AirTag much better.

The biggest issue is with the AirTag itself. While it’s pretty in the box, it scratches and scuffs almost as soon as you take it out of the box. And it doesn’t matter if it’s in a key ring holder or your pocket—as soon as it brushes up against something else it’s going to get scratched. I’ve had an AirTag in Apple’s leather dongle for about a week and there are noticeable scuffs and marks all over it. I’m waiting for the inevitable Apple support document, “How to clean your AirTag.”

It’s a bummer that Apple didn’t build the tech into the new Apple TV Siri remote because it would be perfect for when it drops under the couch or between the cushions. Someone will surely build a handy case that can hold an AirTag, but until then, you’ll need to be creative. (An AirTag-compatible Siri remote case pattern for 3D printers is currently available.)

But the main purpose of an AirTag is to track things that aren’t lost outside of your home. In that regard, they could be a lifesaver and Apple’s method offers quite a few advantages over Tile and other competitors. The biggest is the aforementioned ultra-wideband. Tile has yet to announce an UWB tracker, while Samsung’s $39 Galaxy SmartTag+ does offer UWB support and started shipping on April 16.

Once your AirTag is out of Bluetooth range, it will be able to triangulate your position using nearby iPhones. It’s similar to Tile’s network, but far more robust. For one, there are a lot more iPhones in the world, and for another they need only be signed into the Find My network to help out, which covers nearly every iPhone in existence. So your lost thing won’t stay lost for very long.

However, they’d get lost a lot less frequently if Apple would have added a proximity or separation alert to AirTag. It’s a surprising omission given Apple’s location-based reminders and a feature that would separate AirTag from its competitors. I suspect Apple will add it in a future update.

Also likely arriving in a future update is Family Sharing support so two members of the same household can be tied to the same AirTag. Like separation alerts, it’s a feature Apple is in a unique position to deliver seamlessly and effortlessly, and it’s strange that it initially didn’t. Things like keys are often shared between spouses and I assume many people will want to strap an AirTag on a pet’s collar as well. And Apple Watch support is strangely missing as well—hopefully it’ll arrive in watchOS 8.

What won’t be arriving is any functionality on the AirTag itself, at least not before a second-generation model arrives. It’s not a necessity, but it would be nice to be able to click the center of the AirTag to do something. For example, Samsung lets you program its center SmartTag button to activate a SmartThings action, such as switching on a light or turning on a plug. That kind of peripheral functionality would make AirTag and HomeKit that much more useful.

Should you buy an AirTag?

Apple’s AirTag trackers fill a hole in the Find My app with the ease and elegance you’d expect from Apple. It doesn’t reinvent the wheel, but at $29 with ultra-wideband tracking, seamless setup, and free engraving, the AirTag is as close to an impulse buy as you’re going to get for an Apple device.

But if you’re buying an AirTag for its most common use case and plan to add an Apple Leather Key Ring for a bundle price of $64, I’m not sure it’s worth it. The Find My integration is nice and ultra-wideband support is fantastic if you have an iPhone 11 or later, but it’s a pricey package, especially when you can buy a Chipolo One Spot, which also integrates with Find My and neatly attaches to a set of keys, for $28. It’s a classic first-generation Apple product: If you don’t mind paying top dollar, the good parts will vastly outweigh the frustrating flaws.