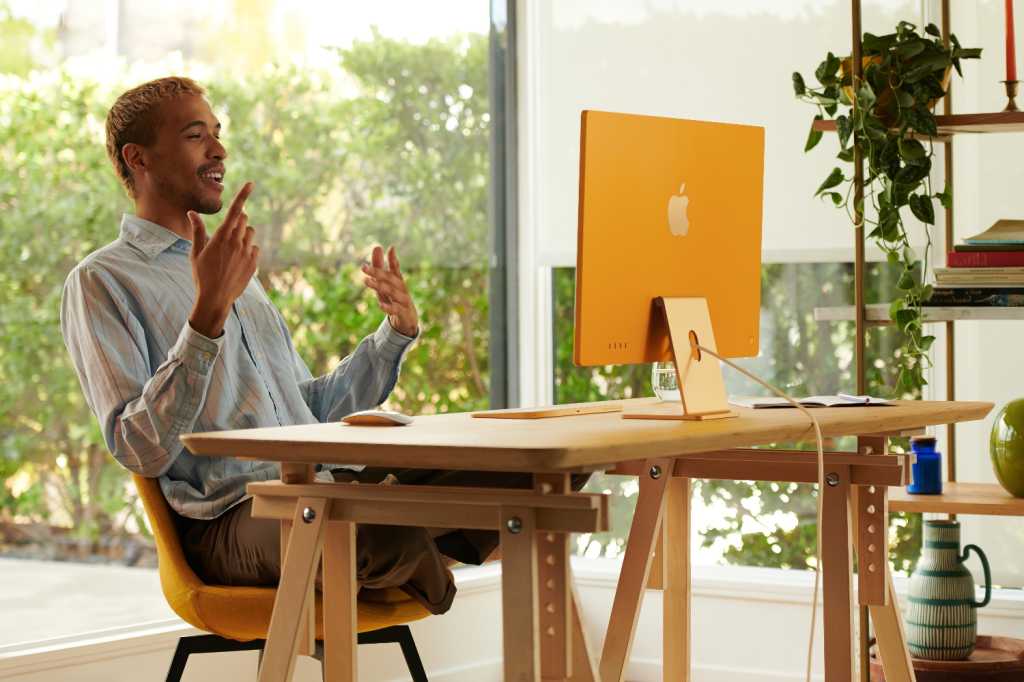 It might feel like ages since Apple unveiled the new 24-inch iMac at its Spring Loaded event, but you can finally buy one on Friday. Like always, Apple has sent out review units to a select group of journalists, and the consensus is clear: the iMac isn’t a groundbreaking computer but it is a lot of fun.

The most recognizable change in the new iMac is the design, and the reviews all agree it’s Apple’s best iMac in years. Monica Chin at The Verge wrote that she’s “never seen so many of my friends, or so many people on TikTok, as excited about a tech product as they seem to be about the colored iMacs,” while Brian Heater at TechCrunch called the new iMac “warm and welcoming,” but cautioned that you’ll want to see one in person before making your purchase. He described his yellow model as “more of a gold than I expected, with a bright and shiny glean.”

CNET’s Dan Ackerman called the new iMac “a clear throwback to the classic iMac G3” but remarked that the lack of an Apple logo on the front “only emphasizes just how much dead space there still is under the display.” Similarly, Chin notes that the iMac’s bezels “are still substantial compared to those of some modern monitors,” while Macworld Sweden’s Jonas Ekelund remarks that, “The only criticism of the design we can agree with is that for the first time Apple does not have an Apple brand on the front. It’s just an empty space, which looks strange.”

As far as the display, it’s predictably impressive, with CNN’s Michael Andronico’s description setting the tone: “The desktop’s 24-inch, 4.5K Retina screen is incredibly dense in detail — in sample images provided by Apple, we could make out every individual flower in a colorful field, and a close-up shot of a peanut butter and jelly sandwich looked mouthwateringly realistic.”

Aside from the colors, reviewers were impressed with the weight and slimness, which makes it easier to move and adjust. Heater notes that “pivoting the system up and down semi-regularly to better frame myself in the webcam” was easy, while Chin says the iMac “looks like a tablet on a stand” compared to the Intel version.

The reviewers were also impressed with the improved webcam, microphone setup, and Ethernet-enabled power adapter. The Verge’s Chin said “the difference between this webcam and the grainy mess the MacBook Pro has is night and day.”

And of course, there’s the M1 chip. While performance was on par with the Mac mini and MacBooks, as expected, with Ackerman writing that “you can easily work with 4K video footage in apps like DaVinci Resolve or Premiere, even previewing in 4K while you go.” The benchmarks between the various M1 Macs were nearly identical, but Chin still calls the M1 in the iMac “the star of the show,” thanks to the “groundbreaking efficiency with which this processor runs.” It’s also very quiet, with Joanna Stern of The Wall Street Journal noting that “it is actually amazing to hear the whirring drive in that ancient (Intel) version next to its completely silent modern-day counterpart.”

All said, the new iMac is a great machine that might not be for everyone. Chin cautions that tech enthusiasts “may see that as a waste of money” but calls it “a simple, attractive, and very functional device for users across all kinds of categories.” Perhaps Stern sums it up best: “for desktop lovers who don’t demand extreme power or a massive screen—especially all you patient souls who have been keeping old silver iMacs alive since the first half of the last decade—this is the almost-perfect answer.”