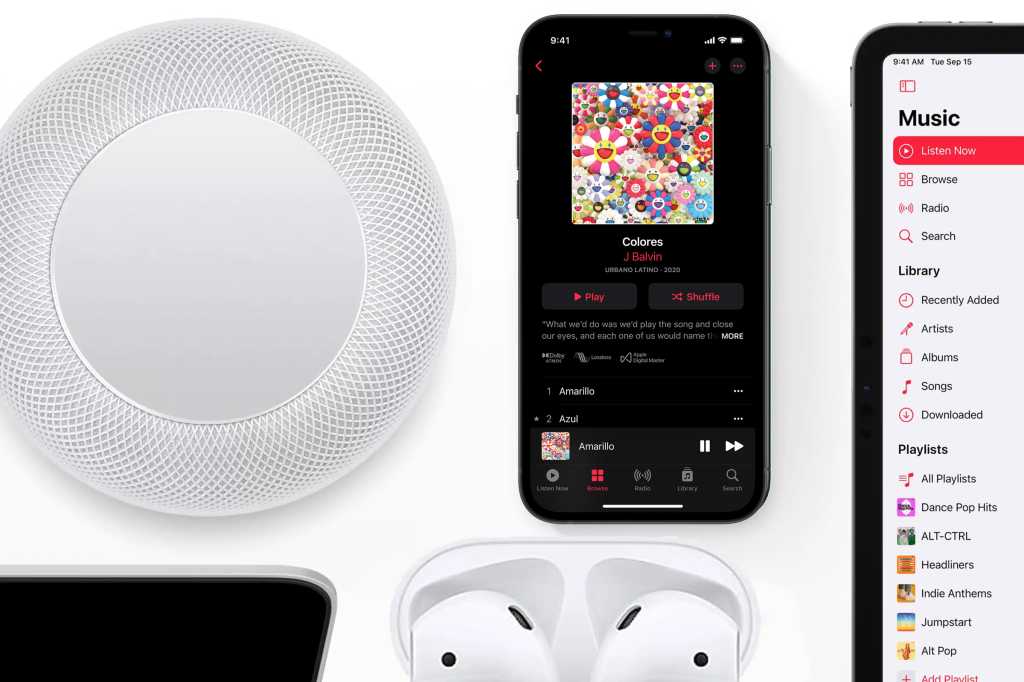 Apple Music got a big update this year, and it’s free to all subscribers, including Android users. The entire catalog of over 75 million tracks will be available in a lossless audio format using ALAC (Apple Lossless Audio Compression), starting with some 20 million tracks and expanding to the entire catalog by the end of 2021. Eventually, all tracks will be available in a hi-res lossless format at a maximum of 24bit and 192kHz. In addition, some tracks will gain Dolby Atmos support, which can be played with compatible devices, including most Apple and Beats headphones. You’ll see labels on albums that show you which formats are available.

Remember: These new formats require iOS 14.6, macOS 11.4, or tvOS 14.6 or later, but they will only show upif your device specifically supports them.

Apple Music Lossless uses the ALAC (Apple Lossless Audio Codec) to retain all the information in the original CD-quality master. It starts at 16 bit, 44.1kHz and goes up to 24-bit, 48 kHz. No bluetooth device, not even Apple’s AirPods, can decode this format, so you’ll need wired headphones.

To enable this format on your iPhone or iPad, open Settings, then Music, then Audio Quality and choose between Lossless and Hi-Res Lossless for cellular or Wi-Fi connections. You’ll also have to go into Settings or Preferences on a Mac or Apple TV to enable this feature. The iPhone has a built-in DAC that supports 24-bit, 48kHz so you can use a pair of Lightning headphones. The 3.5mm port on the Mac also supports 24-bit, 48kHz. On Android devices, you can find the Dolby Atmos toggle in the Audio settings.

Supported listening devices: Wired headphones or speakers are required. Of note, none of Apple’s AirPods or Beats wireless headphones will support Apple Music Lossless. Even the AirPods Max when plugged in via a Lightning cable won’t work, as it only accepts analog connections and then re-converts into digital. HomePod does not currently support Apple Music Lossless though Apple says support will arrive “in a future software update,” which likely won’t be until iOS 15 arrives in the fall.

High-Resolution lossless audio is a step up from the standard CD-quality lossless format. It goes all the way up to 24 bit at 192kHz. It has the same requirements as regular Lossless but also requires external hardware capable of handling 24-bit audio up to 192kHz, such as a USB DAC or receiver. And you’ll also need a USB-to-Lightning dongle for your iPhone or Mac.

Supported listening devices: The requirements are the same as with Apple Music Lossless, but you’ll need your wired headphones or speakers to be connected to an external DAC capable of handling 24-bit 192kHz audio, which is in turn connected to your Apple device. HomePod and Apple TV do not support Hi-Res Lossless.

It’s unclear how many tracks will be available in Dolby Atmos, but Apple has several playlists dedicated to the new format. Many more Apple devices are supported—every AirPods or Beats product with a W1 or H1 chip in it will automatically play compatible tracks in Dolby Atmos, as will the latest iPhones, iPads, and Macs. You can force it on for other headphones by opening Settings > Music > Audio and changing the Dolby Atmos setting to Always On.

Supported listening devices: If you have any of the following headphones, Spatial Audio will automatically be engaged when a track with Dolby Atmos is played. It will also automatically play from the internal speakers on the latest iPhones, iPads, and Macs, and you can force it on for other listening devices through the method above. You must have your Apple TV hooked up to an audio device with Dolby Atmos support (or use AirPods).

Spatial Audio is limited to Apple earbuds, however, as Apple Music on Android will not support the format, even when using AirPods or Beats. Some Android phones that support Dolby Atmos, such as the newest Galaxy S phones, will support spatial audio with wired headphones.

The speakers in some iPhones and Android phones will also play in Dolby Atmos, though the effect will be much less noticeable. Apple specifically says “built-in speakers on an iPhone XS or later (except iPhone SE), iPad Pro 12.9-inch (3rd generation or later), iPad Pro 11-inch, or iPad Air (4th generation)” will support spatial audio.

If you see the “Apple Digital Master” label on an album or track, you should know that it’s just a rebranding of the old “Mastered for iTunes” feature. It has nothing to do with the output format of the track, it’s just a way for Apple to promote tracks that have been encoded directly from the 24-bit studio masters. Apple explains it like this:

By starting with the best possible masters we are able to offer our Apple Music and iTunes customers the highest possible quality audio. Our latest encoder can take advantage of every bit of the high-resolution masters that engineers are creating especially for us. The results, both for streaming and download, are virtually indistinguishable from the original 24 bit studio masters.

You don’t need any special hardware at all to take advantage of Apple Digital Masters—it’s all about Apple creating its files starting from a really high quality source, that’s all.

Apple Music subscribers will be able to redownload music in lossless only from the Apple Music catalog by deleting the original track and redownloading it. Previous iTunes purchases will not be able to be upgraded and new songs purchased from the iTunes Music Store will be limited to AAC encoding.