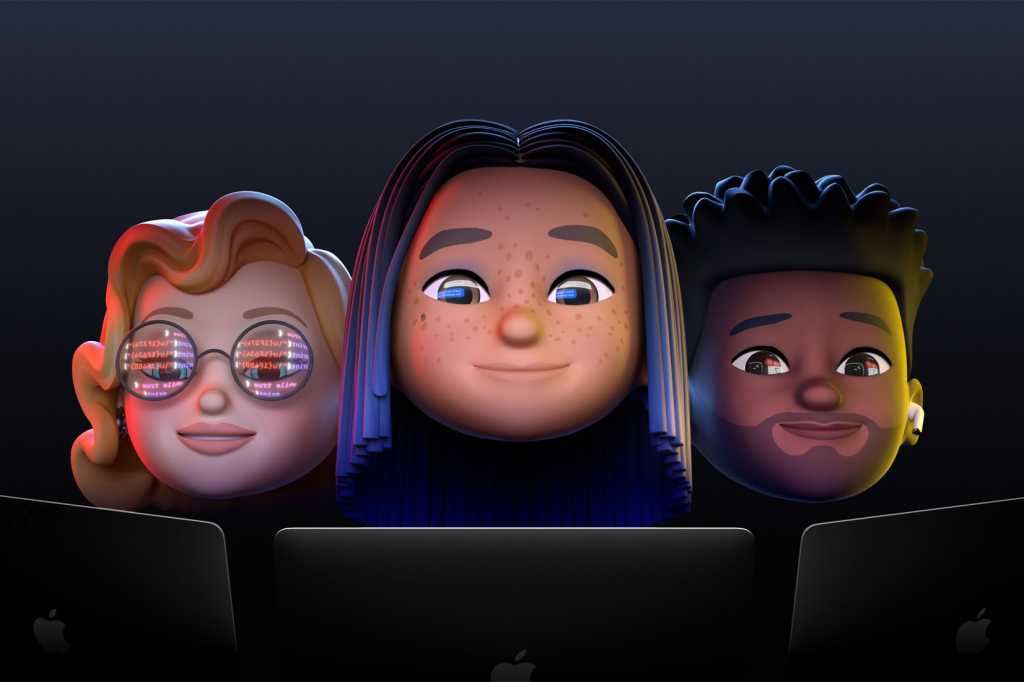 Another WWDC is almost upon us and it’s a good thing it’s remote, because the Macalope hates those awkward family get-togethers when no one wants to talk about the elephant in the room.

For the record, though, cousin Earl should not be keeping an elephant in a bungalow, whether it’s allowed by the state of Texas or not.

In preparation for next month’s events, Apple released a schedule on Monday that included an image of several memoji looking at a screen. Reflected in one of the memoji’s glasses is some code indicating three emoji characters that translate into “Eat. Sleep. Code.”

Now, the Macalope’s not here to tell developers how to run their lives, but that’s not a healthy work/life balance. Even if you can do one of those while getting in some bathroom time (and that one thing better just be coding).

It’s probably not really meant to be an exhortation to work, work, work. It’s meant to be a cute little tip to how already hard-working and dedicated to their craft developers are. But when 15 to 30 percent of the fruit of iOS developers’ labor goes to Apple, those developers might be excused for feeling a bit like they’re being told to get back to work so Apple can make more money.

It might come off better if Apple hadn’t just devoted a lot of its testimony in the Epic case and before Congress recently to say how it believes the App Store is just hunky-dory and it doesn’t know what all the fuss is about because all peoples lurv the magical App Store and its very reasonable rates and rules.

Why, heck, Tim Cook himself said Apple doesn’t even know how profitable the App Store is! They don’t care! They operate it more as a public service, like a water reserve or a national park or Eddy Cue’s free shirt museum. And those emails that were entered into the court record about having meetings about App Store profitability and applying different accounting methods to it? Welllll, they might have idly looked into it at one point, just for curiosity’s sake. Sometimes they get bored.

It’s also a little weird that while Cook is very interested in “customer sat” (as he calls customer satisfaction), he is apparently uninterested in developer sat, because he said he doesn’t regularly get reports on that. Why would he be interested when All Is Well™. Cook also said he doesn’t know how much money Google pays the company to be the default search engine in Safari so let us say that the things that Cook protests he doth not know strain credulity.

Despite Apple’s protestations, a fair number of developers are not happy. A survey cited by the judge in the Epic case indicated that as many as “39 percent of developers were either very dissatisfied or somewhat dissatisfied with Apple’s distribution services”. It’s obviously not the same thing, but if Apple shipped a product that got that kind of “sat” they’d light it on fire and push it out into the ocean.

Epic, naturally, made a point of this:

“Where are the developers coming forward to this court saying ‘We love what Apple’s doing?’” Epic’s [counsel Gary] Bornstein asks. He suggests it’s shocking there have been only complaints, despite the possibility of retaliation by Apple.

The Macalope is not a fan of Epic as a standard bearer for developer rights, but Bornstein’s not wrong here. Of course there are developers who are App Store defenders. Snap, for example, which says it loves the App Store 30 percent cut so much it’d pay it three times if it could. The fact that almost all of its revenue comes from ads and it doesn’t pay Apple a penny for any of it probably has nothing to do with that.

Still, there are independent developers who have done well on the App Store with the existing rules and believe Apple has made their success possible. But when 39 percent of developers, the people who make you a lot of money directly through their apps and help make your platform more attractive, are kind of peeved at you, little jokes about their hard work don’t land quite as well as they might.