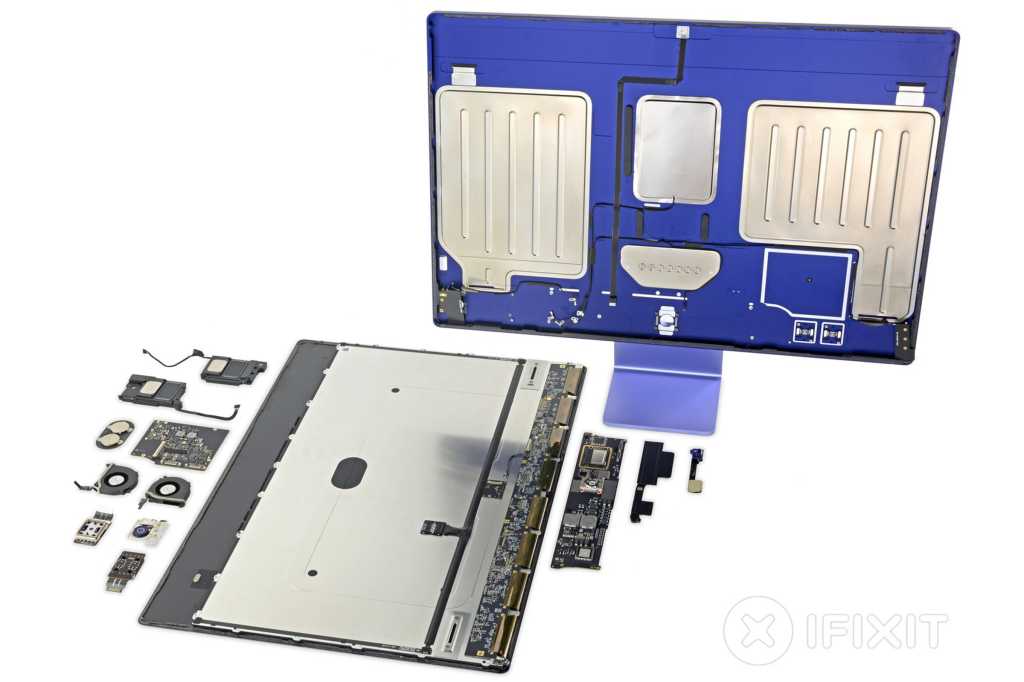 Apple’s new iMac may be backordered until the end of June, but iFixit has already gotten their hands on one. And as always, they’ve dismantled the whole thing. Above all, they found that Apple spend “a lot of impressive engineering went into making this thing as thin as possible,” but also discovered some cool surprises along the way.

The most interesting discovery is the tremendous amount of space inside the machine. As iFixit observes, “Almost all of the silicon is concentrated into narrow horizontal strips at the top (the display board) and bottom (main logic board). That leaves the area behind the screen as almost completely empty, with two huge metal plates occupying most of the space.” Curiously, they’re part of the speaker system. As Vadim Yuryev of Max Tech notes on Twitter, the plates “are actually used to amplify the sound and bass of the speakers by moving more air.” iFixit confirms the “impossibly thin (about 1.5 mm at the opening)” plates act as amplifiers and explains that “their sprawling surface area equates to quite a lot of internal volume, and therefore more air, and fuller sound.”

As far as the motherboard, it’s “the smallest iMac logic board yet” and includes parts from SK Hynix (memory), Kioxia (storage), and Broadcom (ethernet), as well as Apple-designed power management controllers and of course the M1 system on a chip. For cooling purposes, iFixit discovered the iMac handles things a bit differently than the other M1 Macs. “This M1 is actively cooled by a pair of fans. Each fan blows inward across the logic board, where the heatsink draws heat away from the M1 with a copper heat pipe and two short heatsinks,” which Apple has detailed in its iMac introduction video.

The logic board also has “a mysterious button with three LEDs beneath it” that stumped iFixit.

Elsewhere, the teardown revealed a pair of 3V batteries that are “probably CMOS batteries wired in parallel for redundancy,” modular headphone jack, and hinge hardware that’s “ no longer accessible from the outside,” so you’ll need to decide on VESA mounting hardware at the time of purchase.

As far as the Touch ID keyboard, iFixit found a sensor that “looks very similar to an iPhone 7 Touch ID sensor, as well as a security feature that doesn’t allow the same keyboard to be paired to two different Macs. They also found the power supply to be largely similar to the MacBook charger with the addition of a network cable for ethernet.

And it probably goes without saying, but the new iMac is not easily to fix. iFixit gives the iMac a repairability score of 2 out of 10, which is even lower than previous iMacs.