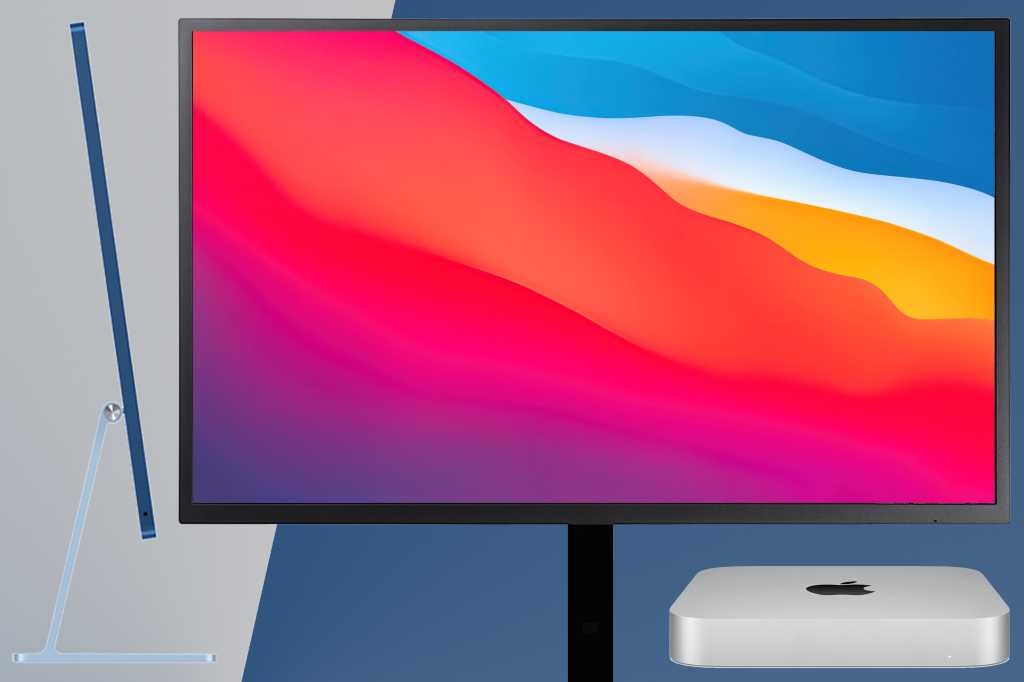 After more than a decade with the same design, the iMac finally has a brand-new look, and it’s stunning. The 2021 iMac also has Apple’s super-fast M1 processor, a bigger display with even more pixels, a much-needed update to the FaceTime camera, and some pretty awesome audio capabilities. But is this enough, or would you be better off spending your money elsewhere?

One thing is clear. The M1 chip is far superior to the 8th-generation Intel quad-core and 6-core options in the iMacs it replaces. If you are just seeking a new iMac to replace an older generation of iMac, then you won’t be disappointed in the speed boost.

There is little to distinguish the iMac from the other M1 Macs though. We have tested all the M1 Macs and found their Geekbench scores to be similar—it’s the same chip after all—even when you consider that the MacBook Air lacks a fan, which could theoretically mean that machine is throttled when the going gets tough. The lack of fan is probably why MacBook Air lags behind a bit in terms of graphics tests, even when you compare the 8-core GPU against the same 8-core GPU.

So, what of the 24-inch iMac, which benefits from even better cooling than that offered by the MacBook Pro? We’ve run benchmarks and they have pretty much proven the theory. Here’s how those speed tests compare:

So while the 24-inch iMac is obviously super-fast, but there is one huge problem: Its performance is practically the same as the other M1 Macs, all of which offer significantly better value for money. And even if you’re just looking for the most speed, the M1 iMac is better than nearly all the other M1 Macs except for one: the Mac mini.

Take the entry-level iMac, which costs $1,299 for an 8-core GPU/7-core CPU and 256GB storage. You could get these exact same specs for the MacBook Air at a fraction of the price: That’s $300 less than the iMac, more than enough to buy an additional external display to use with your MacBook Air.

But the savings get even bigger if you look elsewhere in Apple’s range. The Mac mini is, in our opinion, the best value Mac you can buy. Here’s what you get for your money: The entry-level M1 Mac mini costs $699 for an 8-core GPU/8-core CPU and 256GB storage. That’s a savings of $600 over the entry-level iMac, so you can practically get two Mac minis for the price of one iMac, and you’d get an extra graphics core to boot.

True Tone, which the old models lacked, is Apple’s technology that adjusts the color and intensity of the display to match the ambient light. It means that the perception of the colors you see on the screen will be the same regardless of the lighting in your surroundings. This is a particular benefit to those who work in the creative industries because it means that the lighting conditions shouldn’t affect any color-related work they are doing.

True Tone is not unique to the iMac though, it’s also a feature on the M1 MacBook Air and MacBook Pro. In many ways this is a feature that makes more sense on a laptop that you might move from room to room or use outside.

One point in favor of the iMac is the fact that the screen is bigger than the screens of the MacBook Air and MacBook Pro, while the Mac mini ships without a screen. In each of those cases you could plug in an external display though – and you could choose one that’s bigger than 24 inches for less than $150, while a 4K monitor will cost a bit more. With the savings you’re getting with the Mac mini, you can buy a very nice monitor that will be at least as good as the one you’re getting in the iMac, and since it’s not connected to your Mac, you’ll be able to position it exactly how and where you want it.

None of the above will matter is what you really want is a computer that looks as elegant and fun as the 2021 24in iMac. If your heart is set on a pink, green or blue iMac then it’s unlikely that any other M1 Mac will light up your life in quite the same way. Plus after just over a year of spending more time than ever at home, and with people starting to think seriously about working from home for good, there couldn’t be a better time to buy an iMac for your home.

But—and there is always a but—you should be aware that the seven colors, blue, green, pink, yellow, orange, purple, and a safe silver option, while vibrant on the back of the display are quite muted on the front. So that glorious purple iMac has a lavender front, and the deep red is pink on the front. You may never see the bold colors if your iMac is set against a wall.

Plus, if it’s colors that you want, you might like to consider waiting a little bit longer to see if the rumors that the new MacBook Air will come in a similar selection of tones are true.

In contrast, the Mac mini is (currently) a small silver box that takes up hardly any space on your desk. It might not have the lively appearance of the extrovert iMac, but the simple subdued Mac mini gets our vote.