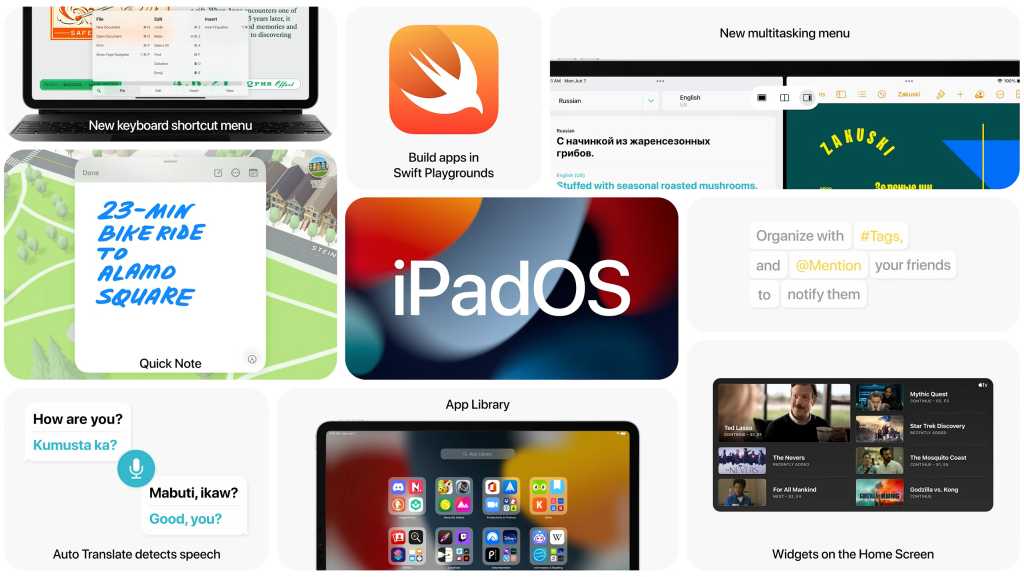 Apple unveiled the next generation of iPadOS during the WWDC keynote and it brings a lot of welcome changes. For the most part, Apple is simply catching up with iOS 14 features such as widgets wherever you like and the App Library, but there are also a few new features geared toward power users. Here are the most important features Apple is bringing to our iPads with iPadOS 15.

Apple introduced a completely redesigned Home Screen with widgets in iOS 14 and it’s finally bringing them to the tablet. They function much as they do on the iPhone, offering small boxes that live among the icons on your screen and provide at-a-glance information to things like weather, photos, and stocks. Widgets have been available in a side menu, but with iOS 15 you can place them anywhere on the Home screen just as you can on iPhone.

There’s a new extra-large widget size class for the iPad, and a bunch of new widgets like Contacts, Find My, Game Center, App Store, and Mail.

Smart Stacks get more intelligence, and can add suggested widgets based on your past activity.

Another iOS 14 feature that didn’t make it to iPadOS 14 is App Library, and now it’s coming to iPadOS 15. Apple is letting users delete app from the Home screen and reorganize app pages just like they do on the iPhone, as well as see an overview of all of your apps by swiping past the rightmost screen. To make it even easier to get to the App Library, Apple is also building a shortcut right in the dock, so you’ll be able to access your apps no matter what screen or app you’re in.

Multitasking on the iPad has been somewhat confusing since it launched in iOS 12, and Apple is simplifying things in a big way in iPadOS 15. For starters, a new multitasking menu up at the top of the screen makes it easier for iPad users to discover multitasking and use Split View or Slide Over. Instead of a complicated and somewhat opaque gesture system, you’ll be able to access the various modes at a tap.

When you want to use two apps at the same time, Apple has also made it easier to get apps into the multitasking views. Now, when you select Split View, the current app will move aside to reveal the rest of the apps on your iPad so you can quickly select the one you want. There are also new keyboard shortcuts that help quickly access the menu.

There will also be a new Shelf that floats above the current to quickly jump between your open windows and paired apps. And finally, you’ll be able to drag app windows on top of each other in the overview screen to quickly open them in Split View.

You can press-and-hold on content in an app (like an email) to bring it up in a new floating center window, so you can focus on just that one thing.

Many people use a keyboard with their iPad more often than not, and Apple’s working to make that experience faster and more intuitive. There’s a new keyboard shortcuts bar that’s more compact so it doesn’t block so much of the app behind it. Keyboard shortcuts have been expanded and reordered, so you can get more done without taking your hands off the keyboard. Press and hold the Command key on an attached keyboard to see a list of all the keyboard shortcuts for that app and the system.

You can even navigate around apps largely with keyboard controls, by using Tab to cycle through text fields and buttons, for example. If you’re a heavy iPad keyboard user, you’ll have to take your hand off the keys a lot less often.

Apple has given Notes on iPad a massive overhaul, with a focus on collaboration and organization on the larger screen. Notes will now support tags for easy filtering, and users in shared documents will automatically get a notification when they’re mentioned.

Perhaps the best feature in the Notes app on iPadOS 15 is Quick Note. Accessible from anywhere, users can swipe from the bottom right corner of the screen with an Apple Pencil or their finger to quickly bring up a floating not that you can quickly write on and then swipe away. Because it’s contextually aware, it will pin itself to the app you’re using and also be available to access and edit across all of your devices.

Developers have been clamoring for the Xcode on the iPad ever since the iPad Pro launched, and they kind-of-sort-of got their wish in iPadOS 15. While Apple stopped short of bringing an Xcode version to the iPad, it will let developers build apps on iPad in Swift UI using the Swift Playgrounds app. Apple says code will be reflected in real-time and you’ll have a complete library of UI components to choose from. You’ll also be able to submit apps for review to the App Store right on your iPad.

The iPad gets all the same big FaceTime updates that the iPhone does in iOS 15. There are voice isolation and wide spectrum audio modes, spatial audio for group conversations, grid view, and the ability to make links for future FaceTime conversations that you can share, add to calendar events, and others can join on the web even from Windows or Android devices.

All the new SharePlay features work on iPadOS 15, too. You can watch TV shows or movies, or listen to music, with playback synced between everyone on the FaceTime call. And all participants can control playback or adjust the playlist.

OK, this is technically a Mac feature, but it’s too cool not to talk about. Apple is bringing the ability to work between your devices with the same input device. With Universal Control you’ll be able to work with a single mouse and keyboard and move your cursor and content between your Mac and iPad for a seamless experience, with no setup required.

Messages doesn’t get much of an overhaul in itself. The biggest visual difference you’ll notice is the way photos look when someone send them to you: a few photos will display as a collage, a larger group will show as a stack you can swipe through.

Focus Mode is a new feature spanning all of Apple’s new operating systems this fall (iOS, macOS, watchOS, and iPadOS). Set a Focus mode for driving, sleeping, studying, gaming, or what-have-you and you can decide which apps and people are allowed to pop up notifications and which will be silenced. You can even set a status and auto-reply so people in Messages (and other apps that support it) will know you’re not available.

Focus mode syncs across all your devices, so if you enable your “work” focus mode on iPhone, your iPad and Mac will also be set to that mode.

The iPad gets the same changes to notifications that the iPhone gets in iOS 15. Namely, there are bigger app icons and people faces so you can more easily parse them at a glance. You can enable a notification summary to appear a few times a day, and choose apps to get their notifications delayed to appear there instead of a constant stream of interruptions.

You can mute a notification or a Message thread for just an hour or a day, and your iPad will suggest you do so if a thread is really active but you aren’t engaging with it. Time Sensitive notifications can be delivered immediately, regardless of your Focus mode or notification summary settings, so you don’t miss the alert about your house alarm going off, for example.

The new Maps app includes an interactive globe, and lots of details in a handful of major cities, all rendered in a new soft, almost cartoony art style. You’ll see landmarks, elevation, trees, important buildings, and more in striking detail.

If you take transit, you’ll notice the transit map has been overhauled and shows major transit lines, and you can pin your most important transit routes to always see info about it. Drivers will get a lot more road detail, including crosswalks, medians, turn lanes, and even 3D interchanges.

Safari is getting its most significant design update in years. There’s a new more compact tab bar, and you can save groups of tabs which will be synced across devices. The start page is more customizable, and there are new privacy protections to make it harder for sites to track you. If you subscribe to iCloud+, you can use iCloud Private Relay to make your IP address and location much harder for sites to determine.

Maybe most exciting is that web extensions are coming to Safari on iPad.

iPadOS 15 will be available this fall, likely in September. It will work on the following iPads, though some features won’t work on the oldest models.

iPadOS 15: How to get the beta

If you’re feeling brave, you can try out iPadOS 15 before its general release. Apple suggests you do not run the beta on any critical device, and that’s good advice—you never know what can go wrong. These betas are especially rough in the early releases.

Developers can go head to developer.apple.com/download on the device upon which they which to run the beta, and download a developer beta profile. Those who aren’t developers can join the public beta by heading to beta.apple.com using the device upon which you wish to run the beta, signing in, and downloading the beta profile. The developer beta will be available immediately, while the public beta is expected to begin in July.

We have a more detailed story about how to get and install the iPadOS 15 beta, if you need more info.