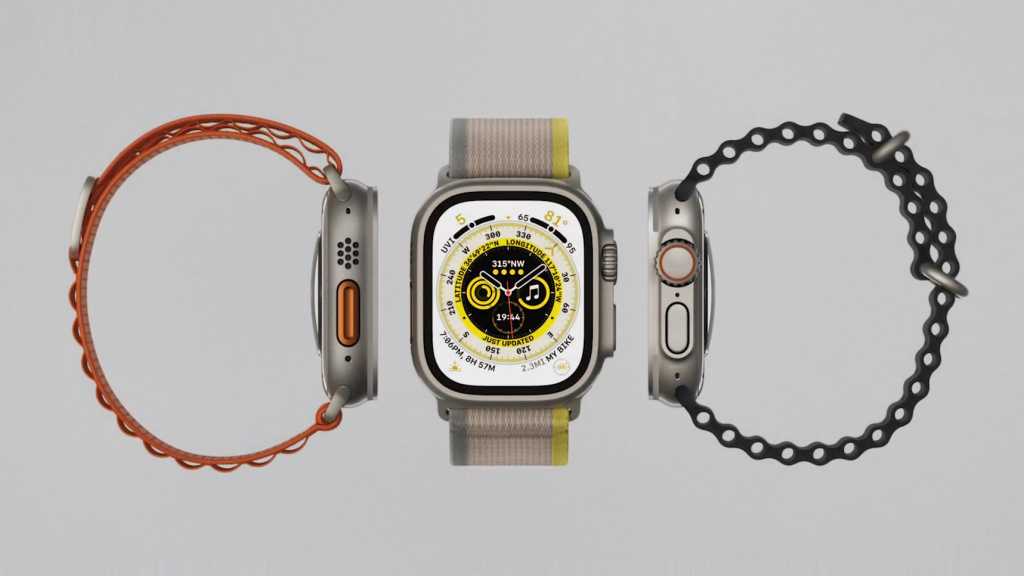 As anticipated Apple has launched a new bigger and more durable Apple Watch – but the name wasn’t quite what we were expecting. The Apple Watch Ultra is a new Apple Watch designed for extreme sports enthusiasts. Apple says it has the biggest, brightest display ever. It also offers up to 36 hours battery life – and even 60 hours battery life later this year when a new battery optimising setting is arrives.

Release date: When will the Apple Watch Ultra launch?

The Apple Watch Ultra will cost from $799/£849 for a cellular model that comes in a Titanium finish with the Alpine Loop, Trail Loop or Midnight Ocean bands.

If you want to get a different band then you will need to buy one separately.

Want to know how the Apple Watch Ultra compares to the Series 8 and other new models? Well in our first impression is here: Apple Watch Ultra first look: Big, chunky, industrial, and extreme. Here’s what else you need to know:

The Apple Watch Ultra comes in a new larger size. It offers a 49mm titanium case. This is slightly off the rumours that indicated we could expect a 50mm screen, but what’s a millimetre when you are running a marathon.

Perhaps 50mm would have been just a bit too big for the average wrist.

The larger watch does have other benefits too, such as room for a larger battery. And the bigger screen means you can see six metrics at once.

There’s a brand new, bright orange Action Button, which is customizable so you can set it to do things like control a workout.

The Digital Crown is also larger and has coarser grooves, and the side button is raised from the case – which should make them easier to press when wearing gloves.

The biggest differentiator between the Apple Watch Series 8 and the Ultra is without a doubt the size. If you want a bigger screen you need to look to the Apple Watch Ultra.

But it’s not just bigger. The Apple Watch Ultra features a Titanium case, unlike the Watch 8, which now comes in Aluminium and Stainless Steel only. Previously there was a Titanium option. The Titanium case should be beneficial for extreme sports as it is low weight, rugged and offers corrosion resistance.

In terms of just how rugged the Watch is, Apple says it can withstand -20C to 55C. And you can take it 40 meters under water (it’s EN13319 certified). When you are diving you’ll be able to view information like depth, temperature and how long you have been under.

The sapphire crystal screen is also protected from impacts by the case.

It’s not just what is on the outside, there is a lot that is different on the inside too…

There are some other visible (and audible) differences. We’ve mentioned the bright orange Action button, but there is also a Siren embedded in the case that sounds a 86-decibel sound that can be head 600 feet (180 meters) away.

And a three-microphone array means that you can make calls and be heard even in a windy environment.

There’s a Depth Gauge to measure how deep under water you are. It will even record water temperature.

The new L5 GPS joins L1 GPS to bring better navigation around tall buildings, trees, and other things that can block signal.

To help you if you get lost there is a Backtrack feature that will help you re-trace your footsteps.

Apple Watch Ultra will offer 36 hours battery life in “normal use”, according to Apple. In terms of less normal use, Apple says someone taking part in a triathlon will have adequate battery life.

Apple also says that low power settings “coming soon” will extend that battery life to 60 hours on low power settings, which we assume is similar to the low power mode coming to all watches from Apple Watch 4 and later running WatchOS 9.

It also features everything the Apple Watch 8 offers, including the new features:

Ovulation tracking – the ability to track temperature changes while asleep in order to notify women if they have ovulated. This feature is designed to help women who are trying to get pregnant manage that process and become aware of any potential issues with their cycle. Obviously it shouldn’t be used for Family Planning, although Apple didn’t explicitly say so.

Crash Detection – the accelerometer will detect if there has been an impact thereby detecting that you have been in a severe car crash and alert emergency services, providing location information, and notify your loved ones if you have added them as emergency contacts.

Like the previous generation Apple Watch 7, the Apple Watch offers the ECG app and heart rate notifications, fall detection, and an always on display.

Apple unveiled the new Apple Watch Ultra at the iPhone launch on September 7. You can watch the event below:

Here’s what we had heard about the Apple Watch Ultra before the launch. See what actually transpired and what might be coming next time round.

91Mobiles have published what they claim to be CAD renders of the Apple Watch Pro. There are a few changes to the design: the Digital Crown remains, but it’s now positioned on a raised platform with the microphone and side button. There is also a new button on the left of the speaker. The watch is thicker than the current models.

Mark Gurman has suggested that “the new button on the left side is probably programmable to do whatever you want. For instance, launching a specific app, feature or workout.”

Back in October 2021 Ross Young of Display Supply Chain Consultants tweeted the suggestion that Apple will launch three size option for the 2022 Apple Watch.

In July, Young added the new size to his prediction, indicating that this new Apple Watch screen size could be 50mm At 50mm the watch face will be 5mm larger than the largest Apple Watch 7. It will measure almost 2in.

The current Watch sizes are 41mm and 45mm, which are already the largest Apple has made. If the third option is around 50mm it would rival the largest wristwatches from Invicta and Citizen.

In a report days before the Far Out event Gurman wrote that the new larger watch “probably won’t appeal to all consumers, as it’s going to be bigger than most wrists.”

If the new Watch is designed for extreme spots enthusiasts it is likely to be constructed from a rugged material that will offer higher water resistance and other features that make it better suited for extreme sports, such as better durability and a shatter-resistant screen. Bloomberg’s Mark Gurman has indicated that it will have a “rugged metal casing” amid suggestions that it will be built from a metal more sturdy than aluminium, although back in March 2021 Gurman suggested it might be covered with rubber-like material, similar to Casio’s G-Shock watches.

In his 10 July newsletter Gurman suggested that it will be constructed from a non-aluminum metal material “probably titanium given it’s much more durable than steel.”

Nearly every band Apple has released since the original Apple Watch has worked on every model, with a few exceptions. Even with the increase in size from 38mm to 45mm, Apple has managed to keep support going through all of the different releases, though that could change with the Apple Watch Pro. A post on Weibo in August claimed that older bands won’t be compatible with the Apple Watch Pro due to its size, and Gurman added that some bands might be compatible with the new watch but “won’t fit as well or look as seamless.”

One of the benefits of the larger screen, rumoured to measure 50mm (almost 2in) is that there will be 7 percent more screen than the largest current Apple Watch. Gurman writes that “Apple could use the larger screen area to show more fitness metrics or information on watch faces at one time”.

Gurman also writes that this new Apple Watch: “will also improve tracking metrics like elevation during hiking workouts and data while swimming.” His sources also indicate that better battery life will enable athletes to track workouts for longer periods of time.

Another new feature is said to be the ability to track a user’s body temperature to detect a fever, this is said to also be coming to the Apple Watch Series 8.

In a report days before the Apple September event Gurman wrote that the Apple Watch Pro will be aimed at “heavy-duty athletes like mountain bikers, hikers, and marathon runners.”

One of the bonuses of the new larger Apple Watch that’s rumored to be in the pipeline is the potential for a larger and longer lasting battery. The current Apple Watch is rated for 18 hours of battery life.

In addition, it’s been reported that a new low-power mode is due to arrive in watchOS 9, though it could be exclusive to the new Series 8models.

We expect the price of this new larger watch to be higher than the entry-level Apple Watch Series 8, but because Apple sells watches with different bands, it’s likely not to be the most expensive watch and strap combination you can buy. With the Series 7 starting at $399/£369 for the 41mm and $429/£399 for the 45mm mode, we expect the rugged model will likely cost more, perhaps $499/£499.

However, it could have a higher price than that. Bloomberg’s Mark Gurman maked a price prediction in his 10 July newsletter based on the current price for the Apple Watch Edition (an Apple Watch Series 7 in a titanium case). That model starts at $849, but Gurman thinks Apple will price the new watch even higher: “I wouldn’t be surprised if it starts closer to $900 to $999,” he wrote.