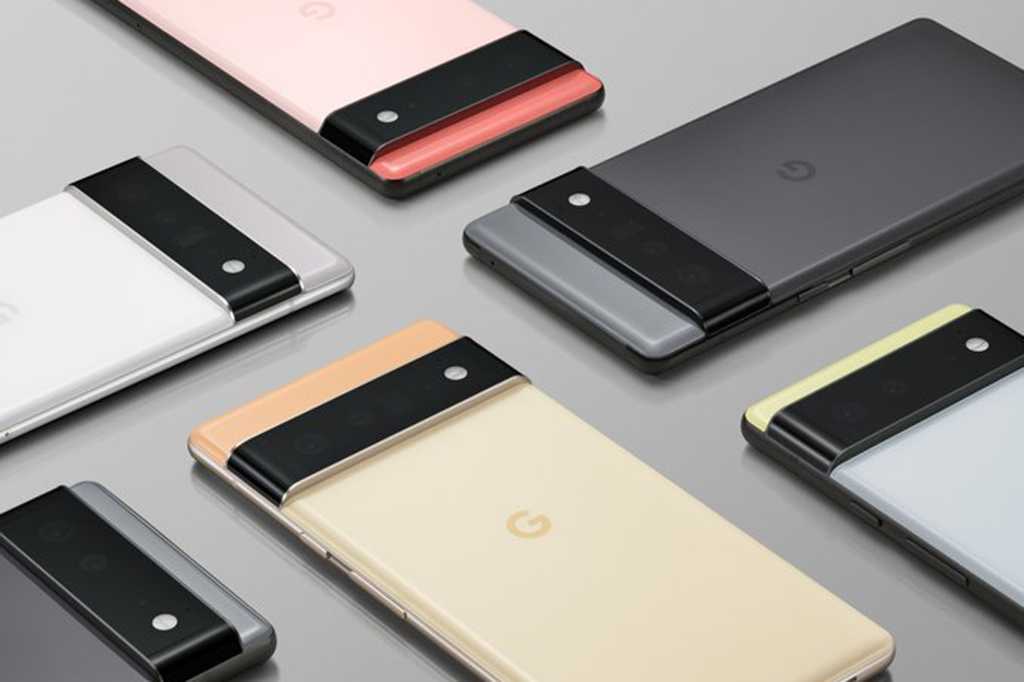 In a surprising move, Google today revealed a bunch of information about the new Pixel 6 and Pixel 6 Pro that are “coming this fall.” As you can see in the pics above, they’re quite unique and seem like something of an homage to the Huawei-made Nexus 6P that launch in 2015. Pixel fans will surely debate the design for months to come but one thing’s for sure: no one will mistake it for an iPhone.

But when you get over its two-toned, camera-heavy design, you’re going to find more than a few similarities with the rumored iPhone 13 that will launch at around the same time.

One of the biggest changes in the Pixel 6 is the new Tensor chip, which is Google’s first system-on-chip. No longer will Google be using an off-the-shelf chip from Qualcomm and it should make the Pixel 6 feel faster and more fluid than the Pixel 5, which used a lower-end Snapdragon 765G processor that was plenty capable but felt slow at times.

The custom chip should bring the Pixel 6 up to the level of the iPhone’s A-series chip, if Google is to be believed. Google hasn’t released much in the way of specifics, but since it’s “custom-made for Pixel,” we can expect Google’s new phones to feel much faster than they have in the past, even when they still used Qualcomm’s flagship processors. In addition to the processing power, Google also says Tensor is loaded with neural abilities to “processor Google’s most powerful AI (artificial intelligence) and ML (machine learning) models.”

Google showed off the design of the front of the phone, which has a centered camera cutout but didn’t divulge any actual specs for the display. However, the Verge spent some time with the devices and has more information: The Pixel 6 Pro will have an iPhone Max-sized 6.7-inch Quad HD+ display with a 120Hz refresh rate while the Pixel 6 has a 6.4-inch Full HD+ screen with a 90Hz refresh rate, slightly bigger than the iPhone 12.

Similarly, the iPhone 13 is rumored to finally bring ProMotion support with a 120Hz refresh rate, so the two Pro phones will likely match up very well. The non-Pro iPhone 13 will likely have a standard 60Hz display so technically lower than the Pixel 6, but based on our experiences with the Pixel 5’s 90Hz display, the two phones will perform similarly.

Apple has always prided itself on having the most private and secure phones on the market, but Google is upping the ante on the Pixel with the new Tensor chip. While details are light, Google claims that the Pixel 6 is “built with the most layers of hardware security in any phone.” It bases that claim on the “count of separate hardware security layers,” which is an oddly specific claim and could change once Apple releases the A15 chip in the iPhone 13. But for now, Google is staking claim to having a phone with better hardware security than the iPhone. Of course, hardware security and software privacy policy are very different things.

All Google Pixel phones have had fantastic cameras, so we expect the Pixel 6 to be even better. Google has revealed that the Pixel 6 Pro will be its first tri-camera phone, with a new 4X telephoto lens to go along with the wide and ultra-wide cameras. Apple separates its phones exactly the same way, with a telephoto camera on the Pros, a distinction that is expected to continue on the iPhone 13. However, we’re not sure if Apple will be bumping the optical zoom on the camera (which is 2x, or 2.5x on the iPhone 12 Pro Max), but as they say, the proof of the pudding is in the eating, so we’ll need to test out the two cameras to see which is superior.

Pixel 6 vs iPhone: Design and UI

At first glance (and second and third), the Pixel 6 is very different from the iPhone. The back of the phone has a feature Google calls the camera bar and it’s basically an elongated bump that stretches across the entire phone near the top of the back. Google has embraced it as a major design element, going so far as to make the color above the bar different than the color below it. The Verge reports that the Pixel 6 Pro will have “shiny, polished aluminum rails” while the 6 brings a design that’s “perfectly flat, with matte-finished rails.” That sounds very similar to the new design introduced with the iPhone 12 that will likely continue to the iPhone 12. And as we can see from the photos Google provided, both will have thin, uniform bezels around the display.

Google will also color-match Android 12 to the back of the phone so when you turn it on you’ll get a seamless color-matched experience. The accents, wallpaper, and color scheme will carry from the back of the phone to the front as Google seeks to create “a single, fluid experience” that seems to be a lot like how Apple crafts iOS, and especially similar to the new 24-inch iMac. Google has always saved some new Android features for its own phones, but with the Pixel 6, it seems to be leaning into the design of Android and crafting an experience that’s as unique on the inside as it is on the outside.

Google hasn’t announced pricing information for the new Pixel, but with the features announced as well as the ones rumored, it’s clear that the new handset isn’t a mid-tier phone like the Pixel 5. Hardware chief Rick Osterloh admitted to The Verge that Google has “definitively not been in the flagship tier for the past couple years” and that the Pixel 6 “will certainly be a premium-priced product,” so we can expect the Pro to be in the same league as the iPhone 12 Pro Max, possibly starting at $1,099. That’s a change from the Pixel 5, which starts at $699 and doesn’t really compete at the same level as the flagship iPhones. With the Pixel 6, Google is clearly looking to make an Android version of the iPhone that offers a premium experience inside and out—but like the iPhone, it won’t come cheap.