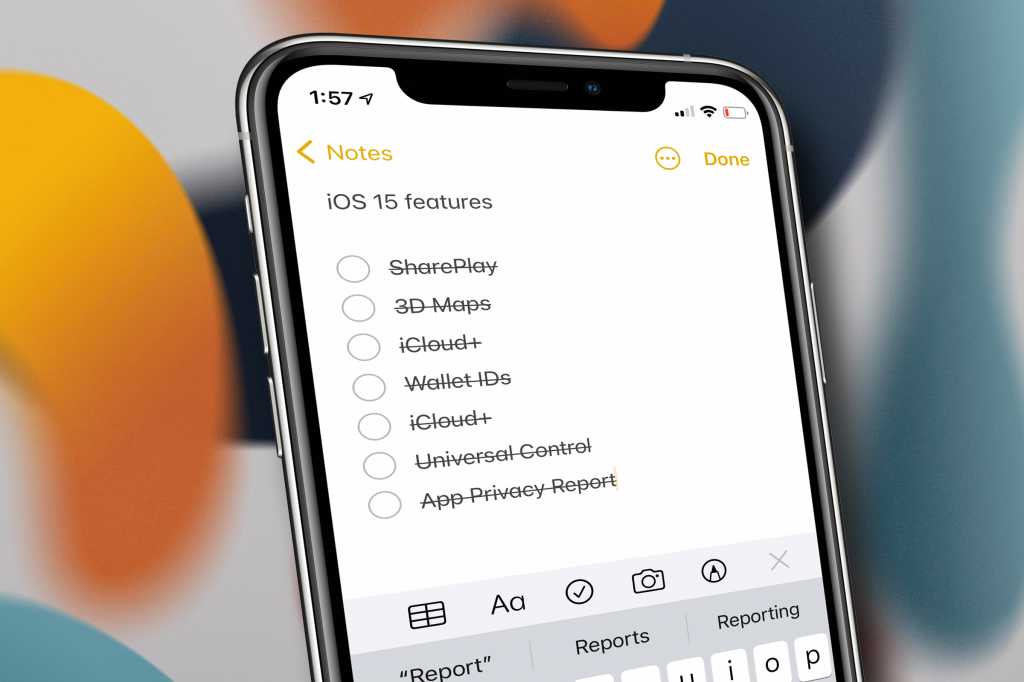 It happens every year. Apple shows off a bunch of awesome new iOS features at WWDC, only to have a handful of them miss the initial release. We shouldn’t be surprised that the same is happening with iOS 15. Some of the delayed features are big, some are small, but inevitably they will show up—in iOS 15.1, iOS 15.2, or another update.

We don’t have an exact release timeframe for any of these “missing” iOS 15 features (Apple rarely divulges that sort of thing). We only know that history tells us to expect them before the end of the year. Here are the iOS 15 features we already know will miss that first release when it arrives on September 20.

Updated 09/20/21: Apple announced that expanded Find My support for AirPods won’t be included in iOS 15 until later this fall.

This is one of the biggest new features of iOS 15, iPadOS 15, and macOS Monterey. It lets you use FaceTime to watch TV or movies together, share your screen, or listen to music together. It keeps playback in sync with your remote FaceTime friends, lets them control playback, and even dynamically controls volume so you can hear each other speak over the music or video.

It just doesn’t work that great. Apple has officially delayed the feature, and now says it will come in a feature update after the initial launch of iOS 15 and macOS Monterey. That’s a good thing, as it’s more important to get it right than get half-baked features out to a billion users who will form a bad first impression.

New in iOS 15 are a pair of features to deal with access to your iCloud account. Recovery Contacts is a way to designate a trusted family member or friend (who also has an Apple product) that can get a one-time code for you, which you can use to get access to your Apple ID if you get locked out. That one is going to be there from launch.

Legacy Contacts is something else. It allows you to designate contacts who will be able to get access to your iCloud data after you die. Given how many of our precious memories are stored in photos and emails and such, it’s an important thing. It was part of the iOS 15 beta releases until beta 5, when it went away. In the release notes, Apple said, “Legacy Contacts has been removed from iOS & iPadOS 15 beta 5 and will return in a future release.”

We’re not entirely sure if that future release will be before the final iOS 15 launch or in a future update, but it certainly sounds like the latter.

Apple has a new way to see exactly how the apps you use are accessing and sharing your data. Just open Settings, then Privacy, then scroll down to Record App Activity. Turn that on and your iPhone will keep a record of every single time any app access your microphone, camera, contacts, location, and which web domains they contact.

All that info will be distilled into a report, so you can see exactly how your apps are accessing your potentially private data. While the Record App Activity toggle is there in the iOS 15 beta, the App Privacy Report itself isn’t going to be available until a feature update after the iOS 15 release.

Apple Maps has a new detailed 3D city view for big cities like San Francisco, Los Angeles, New York, and London. It gives landmarks and features a soft and pleasing look, and it’s a great way to experience Maps in the big cities for which it exists.

But if you want to see the new views on your car’s navigation screen, you’ll have to wait. Apple’s iOS 15 site says, “CarPlay support coming in a software update later this year.”

You can store a lot in your iPhone Wallet app. Credit cards, transit cards, school cards, tickets… but not your government-issued ID (commonly a driver’s license). It’s the last piece of the puzzle preventing many of us from going truly wallet-free.

With iOS 15, you’ll be able to add your state-issued ID to your iPhone and paired Apple Watch, in the states that support it. Apple’s working with the TSA to allow you to present those at airport security, just as you already can do with flight tickets stored in Wallet. It sounds great, but Apple says this feature isn’t coming until late 2021, and even then, your state will have to participate.

Technically, this is more of an iPadOS and macOS feature, but it’s so cool and of such interest that we’re including it here. Universal Control lets you park your iPad next to your Mac and seamlessly move your mouse or touchpad pointer off the edge of your Mac’s display, right onto your iPad. Then your mouse/touchpad and keyboard will work on the Mac. You can also move from one Mac to another this way.

It’s like an amazing wireless keyboard and mouse switch for multiple Macs or iPads, and we can’t wait to try it out. But that’s just it—the feature was absent from all the iPadOS 15 and macOS Monterey beta releases and is now slated to arrive “later this fall.” However, it hasn’t appeared in any of the betas yet, so we’re skeptical Apple will even launch it in 2021.

Another feature not officially announced as releasing later this year is the ability to customize your iCloud email with a custom domain name (which you can invite your family to use for their iCloud email).

We’re not exactly sure how this feature is going to work, and it hasn’t appeared in any beta software yet. Like Universal Control, Apple hasn’t said this feature specifically is delayed but has noted that some iCloud+ features will come in an update after the initial OS launches. You can actually set up this feature in the Account Settings section of beta.icloud.com on the web, though it hasn’t been seen in any of the operating systems yet.

Apple also announced recently that iCloud Private Relay will launch in beta when iOS 15 lands, so it sounds like iCloud+ isn’t quite ready for prime time.

Apple announced that it would be expanding the Find My network\ to include AirPods Pro and AirPods Max in iOS 15 so users can track them just like any other device, but at the last minute, the feature was delayed. Apple now says expanded Find My support will be available later this fall. Once it arrives, users will also be able to set separation alerts so they won’t leave their AirPods behind.

Apple is planning a feature as part of iOS 15 that will scan photos as they are uploaded to iCloud to see if they match any in a known database of child sexual abuse material. It has been carefully designed to preserve users’ privacy, but privacy advocates are worried about a “slippery slope” of similar scanning technology being used for more nefarious purposes. As a result of pressure from these groups, Apple is delaying the release of the feature until it can be adjusted and reworked to further enhance the privacy and security of your iPhone.

We have more on this feature and how it works, and the delay, in our iPhone CSAM article.