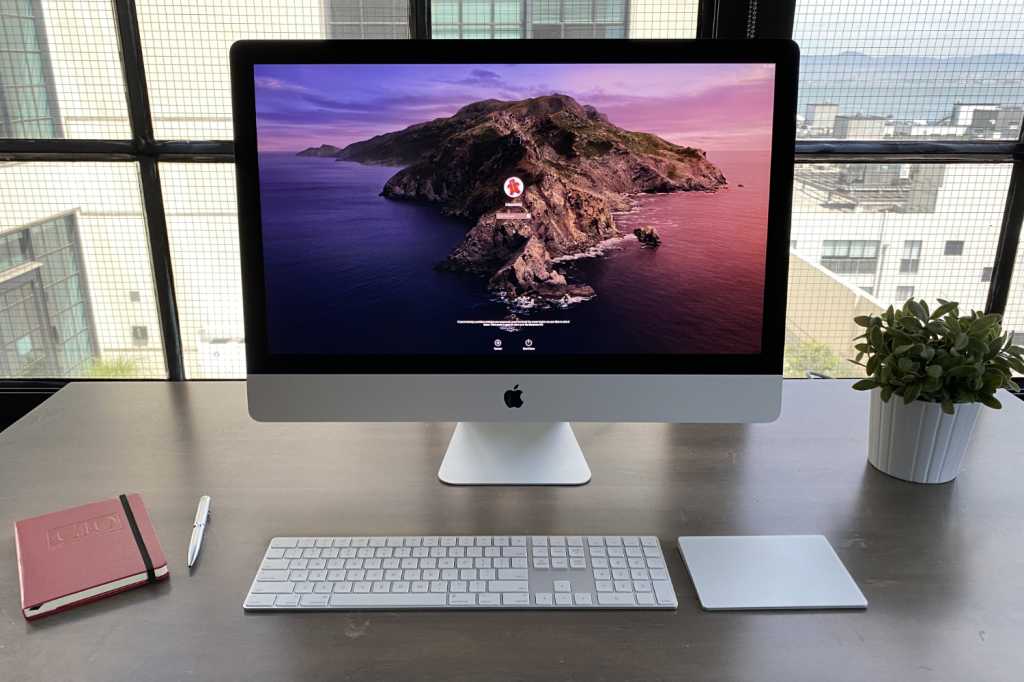 This 2020 27-inch iMac with a 3.6GHz 10-core Core i9 CPU is a built-to-order model that’s a top performer, with a fast processor, SSD storage, and updated graphics

This could be it, you know. There’s a pretty good chance this is the last version of the iMac as we know it, with its iconic all-in-one design and Intel processors. Maybe there’s a chance that those Intel processors get a speed bump upgrade before switching over to Apple silicon, but regardless, they’re on their way out.

The iMac isn’t going out quietly, though. The 2020 27-inch iMac gets your attention by being a top performer with a CPU boost, SSD storage, and updated graphics. It has other features to take into consideration—namely, a new nano-texture glass front—but the emphasis is on speed. If you rely on software that takes advantage of multiple processing cores (video editors, graphics software, databases, etc.), the new iMac will satisfy your need for speed.

The iMac in this review is a built-to order model with upgrades to the processor, graphics card, memory, storage, and the nano-texture screen. With those upgrades, the price of our review unit is $4,499.

At the heart of the 27-inch iMac are new 10th-generation Intel Core processors, replacing the 9th-generation CPUs introduced in 2019. The processor in our review unit is a 3.6GHz 10-core Core i9 with Turbo Boost up to 5.0GHz. This is a build-to-order option, which adds $400 to the price of the high-end $2,299 standard configuration model.

To get an idea of the speed our review iMac is capable of, we ran several benchmark tests. To start with, we ran Geekbench 5 and compared the results to other Macs that Geekbench has on record on its website.

In Geekbench’s single-core tests, the new iMac was 10 percent faster than the built-to-order option in its predecessor, a 3.6GHX 8-core Core i9. A little more impressive is the 19 percent increase over the current entry-level iMac Pro with a 3.0GHz 10-cole Xeon W, or the 26 percent improvement over the 3.5GHz 8-core Xeon W in the base model Mac Pro.

In Geekbench’s multi-core tests, we saw an 18 percent improvement by the new iMac over its predecessor, and a 20 percent boost over the base model Mac Pro. The new iMac and the iMac Pro come close in performance, with the iMac being 6 percent faster.

We ran several other benchmarks tests. You can take a look at the results in our benchmark results section (page 2 of this article).

Apple still offers only 8GB of RAM in the standard configurations, but the maximum amount of memory supported has increased from 64GB to 128GB. However, Apple’s prices for the higher RAM upgrades are insanely expensive; upgrading to 128GB is $2,600.

You can find cheaper RAM prices from third-party sellers, and fortunately the 27-inch iMac’s RAM is user accessible and you can add more RAM yourself. At the time of this writing, a 64GB memory kit (which includes two 32GB DDR4 2666MHz SODIMMs) at Crucial is $310. Buy two of those to fill the iMac’s four memory slots, and you’ll have 128GB for $620 (before shipping and taxes). That’s a savings of nearly $2,000, even if you consider the cost of dumping (or maybe selling) the standard 8GB.

What you can’t upgrade on your own is the solid-state drive that comes with the 27-inch iMac, because the SSDs are part of the iMac’s motherboard. Apple used to offer Fusion Drives—combination SSD and hard drives that compromised on speed (but were still faster than just a stand-alone hard drive) while offering spacious capacity. This time, Apple decided to prioritize speed, ditching the Fusion Drive.

Want more speed enhancements? You can find it in the graphics card. Apple is now using Radeon Pro 5000 XT series graphics, an upgrade from the Radeon Pro 500X series (a Radeon Pro Vega 48 option was available for the previous $2,299 model). Our review unit came equipped with a 16GB Radeon Pro 5700 XT, which is a $500 upgrade for only the $2,299 iMac.

There are a couple of other updates that speed up the iMac. There’s now a $100 option to upgrade the built-in gigabit ethernet to 10 gigabit ethernet. And the SDXC card slot on the back now uses the UHS-II bus interface, which has faster read/write speeds than the previous UHS-I implementation.

The iMac comes by default with a glossy glass front that Apple calls “standard glass.” The main reason Apple uses glossy glass is because the contrast is better than on typical matte displays. The thing is, I’ve always hated glossy displays because of the glare. The reflections I could handle; I’ve trained myself to look beyond those. But glare is more difficult to overcome, especially when dealing with limited placement options in a workspace. I have a window behind my office desk, and during certain times of the day, I’ve accepted that I have to contort myself to work around glare until the sun moves out of the way.

Before Apple redesigned the iMac to have tapered edges, the front glass was held on with magnets and you could remove it with the proper tools. And third-party companies have tried to offer products that could cut glare with an overlay. But going glassless or using a third-party solution disrupted the elegance of the iMac’s design.

On the new 27-inch iMac, Apple now offers a nano-texture glass option, the same that was introduced with Apple’s Pro display XDR. It’s a matte-like finish that, instead of using a coating, etches “nano structures” into the glass. According to Apple, this helps maintain image quality and contrast better than a matte coating.

Our review unit from Apple comes with nano-texture glass. Having seen so many iMacs over the years—not to mention older glossy Apple displays, MacBooks, and even the iPhone and iPad—it was odd to see a non-glossy iMac from Apple. With the iMac powered off, the glass looks like it’s frosted, and the mirror effect was hardly visible. When I turned on the iMac and used it for a few hours, I didn’t notice any reflections, and while glare wasn’t completely gone, it was much more manageable. As for the contrast, I had a hard time noticing a difference compared to a glossy screen. Overall, the nano glass display was oh-so-satisfying, and my eyes didn’t feel strained as usual at the end of the day.

The nano-texture glass is a winner, but it’s a pricey proposition: it’s an extra $500. It’s worth it if you need to manage eye fatigue or you’re in an environment where display work is critical to your production. I’ve heard tech analysts, journalists, and other pontificators say that they think the nano-texture glass is the type of thing that will come down in price over time, but I’m not so sure. If you want this iMac but you’re holding off because you’re hoping the nano-texture glass option will come down in price, stop waiting. However, do you need it if your plans for the iMac are less critical, like in a shared family or office setting, or as a general personal computer for yourself? Maybe not.

Behind the glass—nano-textured or standard—is a Retina 5K display, with a 5120×2880 pixel resolution, support for the P3 color gamut, and 500 nits of brightness. It’s always been a top-notch display and still is, but what makes it even better now is the new support for True Tone, where the iMac uses sensors to automatically adjust the display’s white balance based on the ambient lighting of your workspace. If you don’t like True Tone, you can turn it off in the Displays section of System Preferences.

Let’s not forget about the audio component of video conferencing. The 27-inch iMac has three built-in microphones that Apple calls “studio quality” and stereo speakers that are loud and clean. There is a headphone jack if you prefer to use wired headphones or external speakers, as well as USB ports and Bluetooth as additional options for connecting audio gear.

Apple silicon on the horizon

As I said at the opening of this review, this is most likely the last iteration of this generation of the iMac. That’s because Apple has announced that it is making its own Mac processors and that you could see the first Apple silicon Macs by the end of this year. With that in mind, you might be hesitant to invest in an Intel-based Mac.

Apple has said that it will continue to support its Intel Macs, even when the Apple silicon transition is in full swing, but how long that support will last, Apple won’t say. In 2006, the company did a similar transition when it switched from PowerPC to Intel processors, and those PowerPC Macs were supported for several years.

If history is any sort of guide, expect the company to hold true to its word. This is Apple, though, and the company will eventually do something to push you to the new hardware. There are millions of Intel-based Macs out there, so it’ll be a long while before that happens.

Another thing to consider is how Apple will roll out its new Macs. Apple hasn’t officially announced a release schedule, and speculation has been that Apple silicon will make its debut in machines geared more towards the general consumer, while the high-performing computers will be the last ones to be updated. So that could mean that perhaps the MacBook Air and Mac mini are the first Apple silicon Macs. And since the 27-inch iMac was just released, it could be at least a year before an Apple silicon version is released.

Then there’s the idea that a new Apple silicon iMac will have a new design. It’s been rumored that it could take a form similar to that of Apple’s Pro Display XDR. It could also include features that we’ve been waiting for like Face ID, Wi-Fi 6, smaller bezels, and compatibility with most iPhone and iPad apps. That’s an exciting proposition.

Suffice to say, the eventual release of an Apple silicon iMac makes a buying decision a little more complicated. To help you decide, consider your work. If you absolutely need a faster machine to get things done, invest now, knowing that Apple will support you for several years, and have confidence that your software will run efficiently. If your consideration is more about the desire of having something new and less about productivity, it won’t hurt to wait for Apple silicon.

If you have an older iMac in a production environment, you’ll reap the benefits if you invest in the new iMac. Don’t worry about Apple’s commitment to supporting you in the next several years. They will. And you can rest assured that your software will be able to get the most out of the iMac’s CPU.

If you bought an iMac or even an iMac Pro within the past year, the new iMac’s speed advantage is incremental. Consider waiting for the second or even third generation of Apple silicon Macs. By then, there could be native versions of the software you use for Apple silicon, insuring that you’ll get the most performance.

As the last iteration of a memorable design, the new 27-inch iMac leaves quite an impression. It has new features that users have been waiting for, and will be a very serviceable machine while Apple silicon Macs are introduced, and the software evolves. The time is right for a change, but it’s nice to see this iMac go out as a winner.