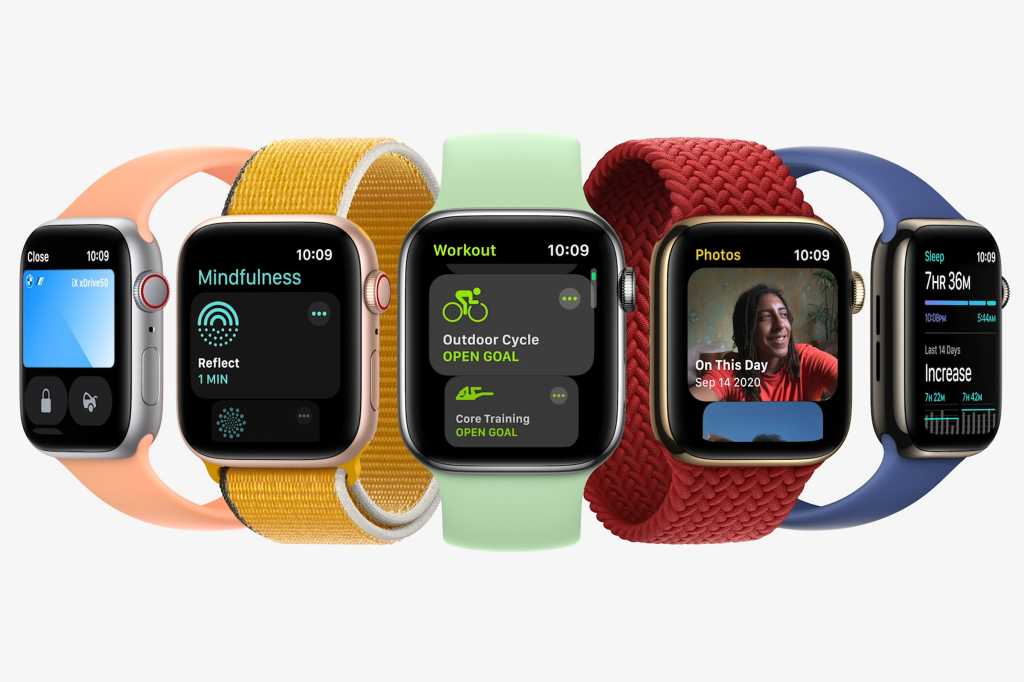 At its “California streaming” event in September 2021, Apple took the wraps off of its latest flagship wearable, the Apple Watch Series 7. Here’s everything you need to know about what’s new, what’s different, and which model you should buy.

Apple Watch Series 7: How is it different from the Series 6?

The major differences between the new Apple Watch Series 7 and the Series 6 it replaces are relatively small. The Series 7 has a slightly larger, stronger, and brighter display, faster charging via USB-C, and a series of new colors for the aluminum model. It’s also rated for IPX dust resistance for the first time. Apple hasn’t listed the complete technical specifications of the Series 7 as of this writing, but from what Apple has described, it has the same health features, sensors, processor, and battery as the Series 6.

Apple Watch Series 7: How much better is the display?

The Apple Watch Series 7 watch features 41mm and 45mm always-on screens, the largest Apple has ever made. The Series 6 had 40mm and 44mm sizes while the Series 3 watch has 38mm and 42mm options. That makes the Series 7’s screen 20 percent larger than the Series 6 and 50 percent larger than the Apple Watch Series 3. However, the watch itself hasn’t increased much in size—Apple achieves the 1mm increase by shrinking the bezel down to 1.7mm.

The corners of the watch are more rounded than on the Series 6, and Apple says the display has a “unique refractive edge that makes full-screen watch faces and apps appear to seamlessly connect with the curvature of the case.” Apple also says the Series 7’s Always-On mode is 70 percent brighter indoors and has a stronger crystal coating to make it more resistant to cracks and scratches.

The color choices available depend on the case material. Here are the options Apple offers.

When Series 7 becomes available Apple will have two new watch faces that take advantage of the larger display. The Contour face places the numbers of a clock face on the very edge of the display, and the numbers enlarge as the hand of the clock passes through them. The Modular Duo face has two large complications for the center of the display. The Nike Apple Watch Series 7 also has a new Bounce face that animates when you tap the screen, turn the Digital Crown, or move your wrist.

Apple Watch Series 7: Are there other new features?

Apple offers other interface tweaks and features throughout watchOS 8 to take advantage of the larger screen. There’s now a full on-screen keyboard that supports the QuickPath entry method. Apple also made the buttons within some apps on the Series 7 larger so they’re easier to press.

Apple Watch Series 7: Is it waterproof?

Like previous Apple Watches, the Series 7 is water-resistant up to 50 meters.

Apple Watch Series 7: How long will it last?

The Series 7 has an 18-hour battery life, the same as the Series 6. However, charging has improved. Apple says that the Apple Watch Series 7 offers improved charging speeds through its magnetic charger thanks to the inclusion of USB-C rather than USB-A. According to Apple, the new charger fills up the Apple Watch 33 percent faster and only needs eight minutes of charging to make it through a full eight hours of sleep tracking, according to Apple.

Apple Watch Series 7: What are its health features?

Here are the key health features of the Apple Watch Series 7:

These are the same sensors that were on the Series 6 watch. The Apple Watch SE and Series 3 do not support the Blood Oxygen and ECG apps.

Apple Watch Series 7: Does it have new fitness features?

Since the Apple Watch Series 7 doesn’t have any new sensors, it doesn’t bring any unique fitness features. However, watchOS 8 does have some new health and fitness features, including a new auto Outdoor Cycle workout. It also brings the ability to start and stop tracking in sync with your ride, so you get accurate workout metrics. And with the growing popularity of e-bikes, the cycling workout algorithm has been updated to be able to sense when you are using pedal-assist or not.

Fall detection was introduced to the Apple Watch Series 4, and with watchOS 8, it now has been updated to be able to detect when someone falls during a workout, including cycling. If the watch senses a hard fall, it will display a screen to allow you to call emergency services. Apple is also including more features that work with the Fitness+ service. Fitness+ will have Pilates and a set of workouts to get ready for the snow season as well as guided meditations. All Apple Watch buyers get three months of free Fitness+.

Apple Watch Series 7: How much is it?

The Apple Watch Series 7 starts at $399 for the 41mm model. Apple hasn’t announced pricing for the rest of the lineup, but based on the Series 6, we assume the 45mm model will $429 for the 45mm version. The cellular models are $100 more. The stainless steel models start at $749 and the titanium watches start at $799. Additionally, Nike models start at $399 and Hermes models are available for $1,299 and up. You can test any combination of watch and band using the Apple Watch Studio on Apple.com.

Apple Watch Series 7: When can I buy one?

The Apple Watch Series 7 will be available for preorder at 8 am ET on Friday, October 8 on Apple.com, and will hit shelves a week later, on October 15. However, supplies might be very constrained. The whole electronics industry is currently experiencing limited supplies of components, so you will likely see shipping delays the longer you wait to order. If you really want to get a Series 7 watch by October 15, you need to place your order as soon as it is allowed on Apple’s online store.

Apple Watch Series 7: Where can I buy one?

Apple will be selling the Apple Watch Series 7 through its website and iOS app. Buyers who activate a Series 7 Watch with T-Mobile/Sprint or Verizon will get $100 back. It will also be available at Best Buy and carrier stores.