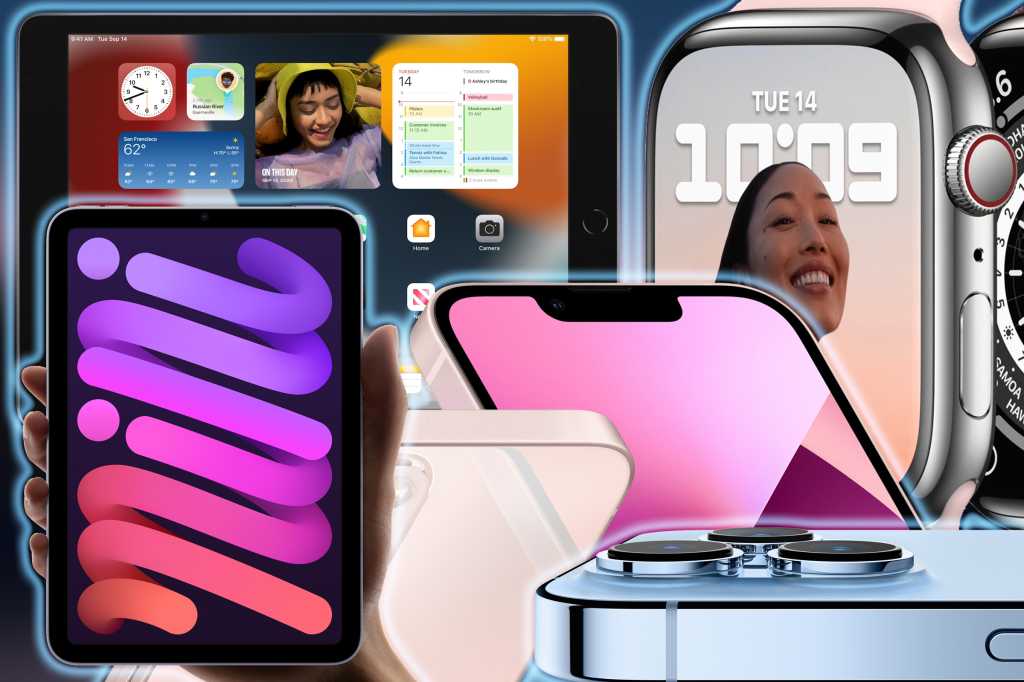 Apple just wrapped up its “California Streaming” fall event, where it announced quite a few products and even took a little extra time to pat itself on the back for Apple TV+. If you have over an hour to spare, you can watch the entire thing at Apple’s site or on YouTube below. But if you want a quicker digest, here’s a brief breakdown of everything Apple announced.

It wouldn’t be a September Apple event without the introduction of new iPhones! The iPhone 13 and iPhone 13 mini are very similar to the iPhone 12 and iPhone 12 mini in appearance, with several notable improvements. The A15 is faster and the cameras are improved (particularly the Wide camera), the display is brighter, and Apple managed to make the notch 20% smaller. But what users will probably notice most is a big promised boost in battery life and double the storage.

We have a guide to the most important new iPhone 13 features here.

The iPhone 13 Pro models get more improvements than the regular iPhone 13, this year. There are bigger batteries and a smaller notch, plus a brighter display, true. But Apple also improved all the cameras. The telephoto camera is now a 3x zoom and supports Night Mode. The Wide camera has big 1.9-micron pixels and an f/1.5 aperture for a huge boost in low light performance. The focus distance is down to 2cm for killer macro shots. Soon you’ll be able to shoot in ProRes, which will probably use up a lot of storage. Good thing there’s a new 1TB option.

The iPhone 13 Pro and Pro Max are getting ProMotion, with variable refresh rates from 10Hz to 120Hz, as rumored. However, the rumored “always-on display” did not materialize.

We have a guide to the most important new iPhone 13 Pro features here.

The new Apple Watch starts at $399 and will be available “later this fall,” though Apple did not divulge an exact release date. It features a refreshed design with softer edges and a display that pushes right out to the edge, for 20% more screen area than the series 6. The bigger display enables new watch faces and a full keyboard, but all existing bands are still compatible with the new sizes.

It’s also Apple’s most durable Apple Watch yet, with better dust resistance and a display that resists cracks better.

The beloved iPad mini got a much bigger upgrade. It now takes its cues from the recent iPad Air redesign, with slimmer bezels, rounded corners, and Touch ID built into the top button. This lets Apple push the display up to 8.3″ (from 7.9″) without making the iPad mini any larger. It also gets a bump up from the A12 to the A15 processor, the Lightning port has been replaced by USB-C, and it supports the second-generation Apple Pencil. There’s a new 12MP rear camera and ultrawide 12MP front camera with Center Stage. All that new stuff makes for a higher price tag ($499), but it seems worth it for fans of Apple’s smallest iPad.

The standard, basic iPad has been updated with an A13 Bionic processor and fully laminated True Tone display. It’s also getting a new 12MP ultra-wide front camera with Center Stage, just like the iPad Pros. It is otherwise very much like the eighth-generation iPad, with relatively large bezels (though they’re a bit smaller than before) and a Touch ID home button. It still starts at $329.

Read our overview of the 9th-generation iPad here.

A new Apple Watch is a great opportunity to announce new features for the Apple Fitness+ service, which requires an Apple Watch. Beginning on September 27, Fitness+ will have some new workouts available. Guided Meditation and Pilates join the workout types, and there’s a new “Workouts to Get Ready for Snow Season” program, too.

Later this fall, you’ll be able to use SharePlay to do group workouts with up to 32 people. And finally, Fitness+ will come to an additional 15 countries later this year, in English with subtitles.