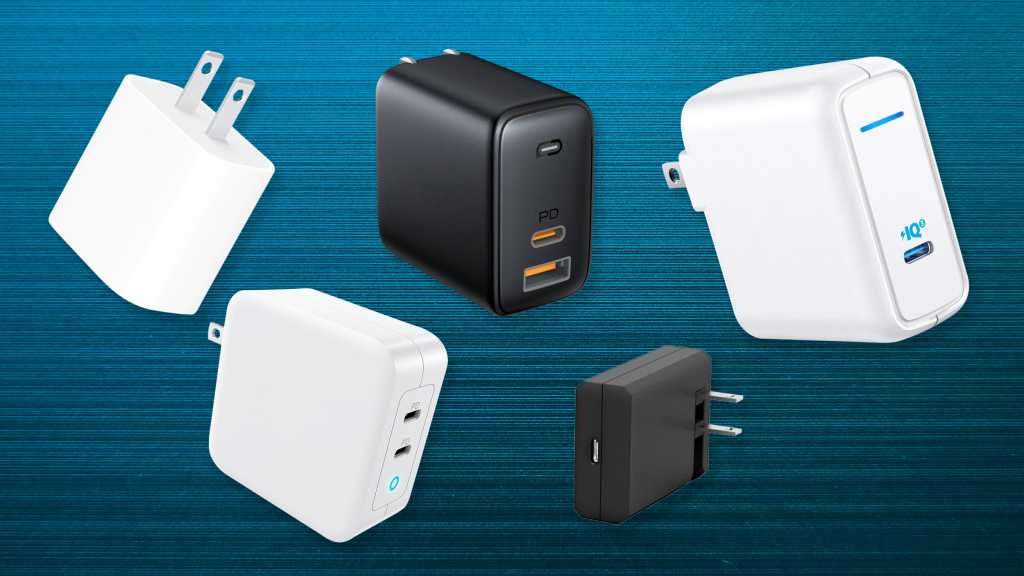 If you’ve ordered a new iPhone 12, you’ll notice that the box is a whole lot slimmer than in previous years. That’s because the bulkiest accessory is gone: the power adapter. In fact, Apple has removed the charger from all iPhones it sells, so whether you’re spending $399 on an iPhone SE or $1,399 on a maxed-out iPhone 12 Pro Max, you need to bring your own charger.

Any old charger and Lightning cable you have lying around will work, of course. But if you’ve been using Apple’s old 5W adapter, it’s a perfect time to upgrade. For the first time, Apple is supplying a USB-C-to-Lightning cable in all iPhone boxes to allow for fast charging, so all you need is the right charger.

The most important thing to consider when buying a new charger is the amount of wattage it will provide to your device. For years, Apple supplied “good-enough” 5-watt chargers in the iPhone box, which take about 2.5 hours to fill up your iPhone. That was fine for the iPhone 5 and earlier, which didn’t support fast charging, but the newest iPhone 12 models are capable of working with chargers that handle up to 20 watts. You can fill up about 50 percent of an iPhone 12’s battery in about 30 minutes with the right adapter.

So you should get a USB-C charger that’s capable of delivering a 20-watt charge. Quite frankly, it’s harder to find one that doesn’t than one that does, but you’ll want to make sure you’re at least getting the bare minimum to allow for maximum fast charging. You’ll also want to make sure the charger supports USB Power Delivery, which any third-party charger almost certainly will do.

Check the size and the specs

Apple’s chargers have always been light, small, and portable, but some third-party adapters make them seem downright bulky. That’s due to the newest charging tech, gallium nitride (GaN), which allows for adapters that are significantly smaller and more power-efficient.

Charger makers have already begun replacing the silicon inside power adapters with gallium nitride, and the size difference is significant. For example, the Anker PowerPort Atom III is 35 percent smaller than the adapter Apple supplies with the 13-inch MacBook Pro, despite delivering the same 60-watt charge. Unless you’re buying one of the models here—which are all GaN except for Apple’s adapter—be sure to check out the dimensions in the technical specs.

Just because Apple only allows you to charge one device per plug doesn’t mean they all have to be that way. Many third-party adapters offer multiple ports on a single wall charger. If you’re going to be regularly charging more than one device at a time, buy an adapter with at least two ports—some have as many as four ports. You can even get a mix of USB-C and USB-A, depending on your needs.

Prongs: To fold or not to fold

After you decide how much power and how many ports you need, just one question remains: Do you want the prongs to fold or not? Some third-party chargers have folding prongs to protect the adapter as well as other items if you toss it in a bag, but Apple’s 20W charger and a few others have protruding prongs. It’s a small thing, but it could make a big difference in your travel bag. 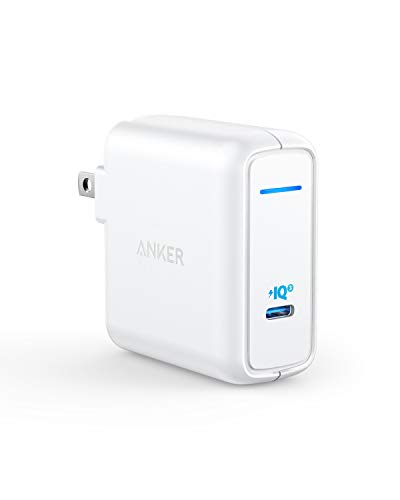 Price: $40
Dimensions: 2.4 x 2.28 x 1.12 inches
Why we love it: Some of the best chargers are the simplest, and the Anker PowerPort Atom III fits the bill. It’ll deliver a proper charge to your iPhone or laptop in a downright tiny charger that will fit in pocket or a bag. There’s nothing fancy about it, but it’s still one of our go-to chargers when we’re on the go or at a desk. 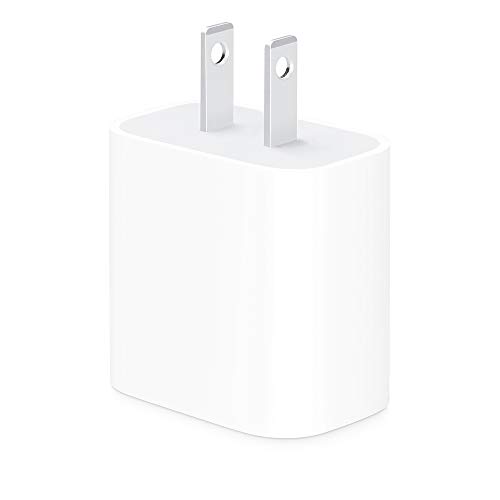 Price: $19
Dimensions: 2.64 x 1.26 x 3.27 inches
Why we love it: Apple’s new 20W USB-C power adapter is as basic as it gets. It’s one of the bulkiest chargers on this list as well as one of the heaviest, it won’t charge a laptop, and you can’t charge more than one device at a time. However, if you want to keep your chargers in the family, it’s a solid option for $19. In our testing, it won’t charge your phone noticeably faster than the old 18W plug, but it is $10 cheaper than the previous price. We’d like it better if Apple offered a half-price option for iPhone buyers, but even at full price, it’s not a terrible value at all. 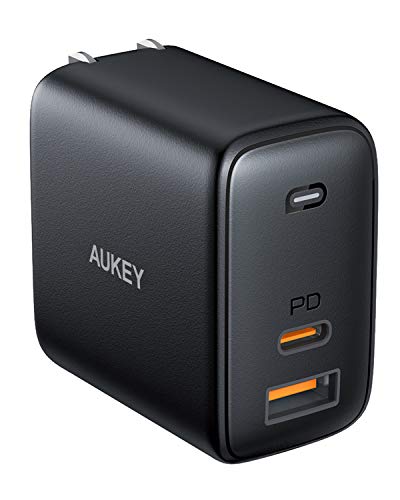 Price: $38
Dimensions: 2.05 x 2.05 x 1.18 inches
Why we love it: Aukey is one of the top names in USB-C chargers, and it’s at the forefront of the GaN push, as well. There are several Aukey options available, but if you need a USB-A port on your charger for older devices, you can’t go wrong with this Omnia charger, which can charge a phone and a laptop at the same time. You get 12W charging when using a USB-A Lightning adapter with your iPhone 12, as well as the full 20W fast-charging when using USB-C. And with a 60W max output, you won’t need to carry around your bulky MacBook Pro adapter anymore. 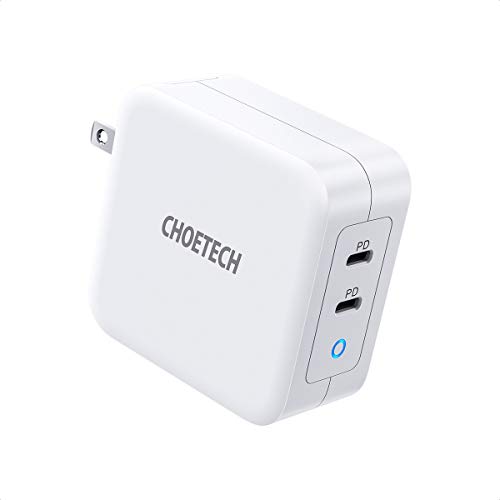 Price: $43
Dimensions: 2.68 x 2.6 x 1.34 inches
Why we love it: The Choetech 100W charger is one of the largest we tested, but at a little more than 2.5 inches around it’s still significantly smaller than the 96W power adapter Apple supplies with the 16-inch MacBook Pro. And you get an extra USB-C port with 45W to each device when used together. At 3.5 ounces, it’s actually lighter than some of the 60W chargers on this list too, so you’re getting a whole lot of juice without adding much bulk or weight to your bag. 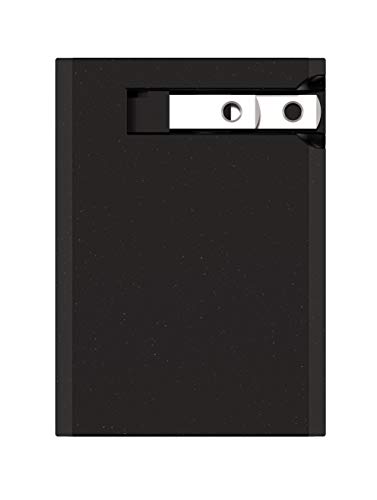 Price: $70
Dimensions: 2.71 x 1.99 x 0.77 in
Why we love it: The Eggtronic Sirius 65W USB-C power adapter is the most unique designs we’ve used, with a slim body and a pair of lateral-folding prongs that seem to defy the laws of physics. The thinness makes it easy to slip into a pocket or a bag, and lets it fit into small spaces behind desks and tables as well. 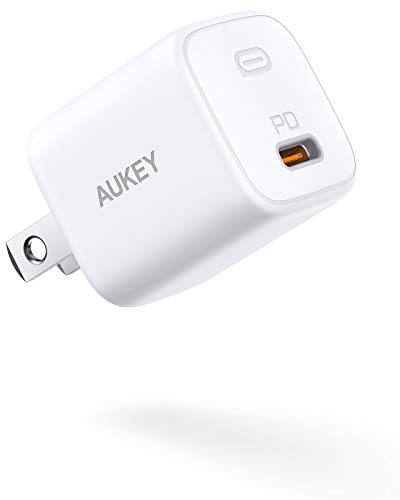 Price: $20
Dimensions: 1.75 x 1.13 x 1.13 x inches
Why we love it: If you miss Apple’s tiny 5W power adapter, you’ll love the Aukey Omnia Mini. It’s about the same size as Apple’s charger but brings 4x the charging speed. It’s doesn’t use gallium nitride tech like the super-small Spigen adapter, rather it uses an “ultra-compact stack design” to enable more power to be packed into a smaller charger. So it’s a bit heavier than the PowerArc, but we haven’t noticed it getting hot under heavy loads. 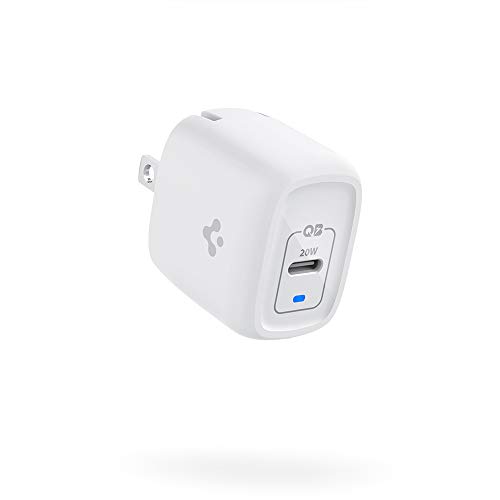 Price: $20
Dimensions: 1.56 x 1.36 x 1.09 inches
Why we love it: We spotlighted numerous gallium nitride chargers on this list, but Spigen’s PowerArc 20W is by far the smallest. When opened, it’s only a bit larger than Apple’s prior 5W adapter (which measures 1.74 x 1.01 x 1.03 inches) but charges 4 times as fast, whether you’re using a USB-C-to-Lightning cable or a MagSafe cable, thanks to GaNFast technology instead of old-fashioned silicon. The fold-up plug keeps the size down and ensures it won’t get snagged on anything in your bag, and its small size means it won’t block other chargers in a power strip.