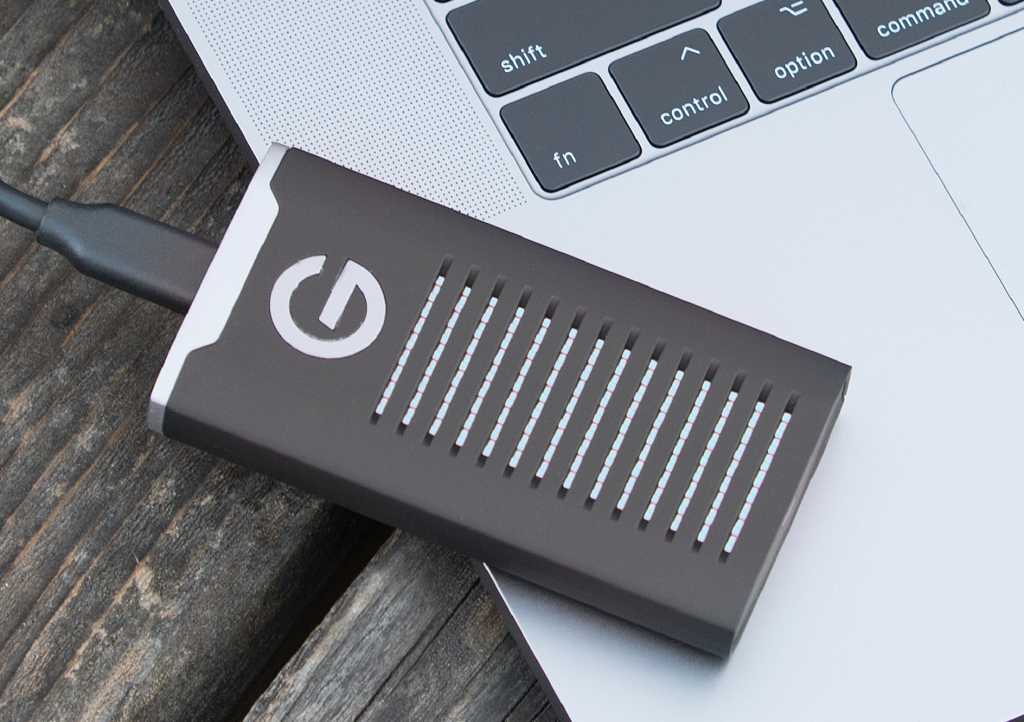 The fast and light G-Drive SSD is as attractive and fast as it’s branding is arcane. It can be purchased from the WD (Western Digital) store under the SanDisk Professional brand, and is part of the G-Drive line. Some might remember that G-Drive was a boutique Mac storage vendor some time ago. WD bought G-Drive as well as SanDisk, which develops nearly all of the parent company’s solid state technology. Hence, it’s the SanDisk Professional G-Drive SSD from WD.

Who cares, you say? Just filling you in. The drive is excellent, so let’s get on with it.

The drive is a predominantly dark gray with a louvered top and bottom to allow heat shedding from the internal metal structure. A silver end cap on the business end houses the single Type-C USB port and there’s a small slit LED activity indicator on the other end of the drive.

WD wasn’t forthcoming about the SSD inside, but it’s likely one of the company’s lower-tier NVMe models as evidenced by its approximately 1GBps transfer rate (SATA would top out at 550MBps) . There’s no need for anything faster when USB is already capping the performance.

The drive is pre-formatted to HFS+, but you can reformat it to exFAT if you want to share data with Windows machines, or NTFS if you only write from Windows PCs. Sandisk includes both Type-C to Type-C and Type-C to Type-A USB cables.

WD didn’t provide a TBW rating. However, the drive is warrantied for five years which is a nice bump from the more common three years.

We haven’t been getting very good USB performance out of our new 24-inch iMac, so take the Disk Speed Test results (immediately below) as what you might see on Apple Silicon, but not the true potential of the drive. We tested the drive on PCWorld’s testbed to get a clearer picture of that. In total, the drive was easily the fastest 10Gbps USB we’ve tested as you’ll see below.

The CrystalDiskMark 6 tests run on sister publication PCWorld’s test rig are more like what you’ll see on an Intel Mac or a PC. They’re also in line with WD’s claims and faster than the competition. Indeed, they’re the fastest we’ve seen from a 10Gbps USB SSD.

The G-Drive SSD outpaced the competition by a substantial margin in our 48GB real world transfer tests, and by a rather large margin. That was an unexpected, but pleasant surprise. Note that one drive is the previous fastest external USB we’d seen from SanDisk, the Extreme Portable Pro.

The G-Drive SSD was also fast writing our single 450GB file to its cells. It easily bested the Extreme Portable Pro and the recently reviewed LaCie Portable SSD, but was tied by the Seagate FireCuda Gaming SSD. The pace was also very consistent, never slowing down once during the entire 450GB write.

The SanDisk Professional G-Drive SSD is currently the cream of the portable 10Gbps USB crop. It’s a bit larger than some, and perhaps not as sexy as others, but it’s the fastest, the most affordable from a brand vendor, and one of the few that sports an IP67 rating. Nice.