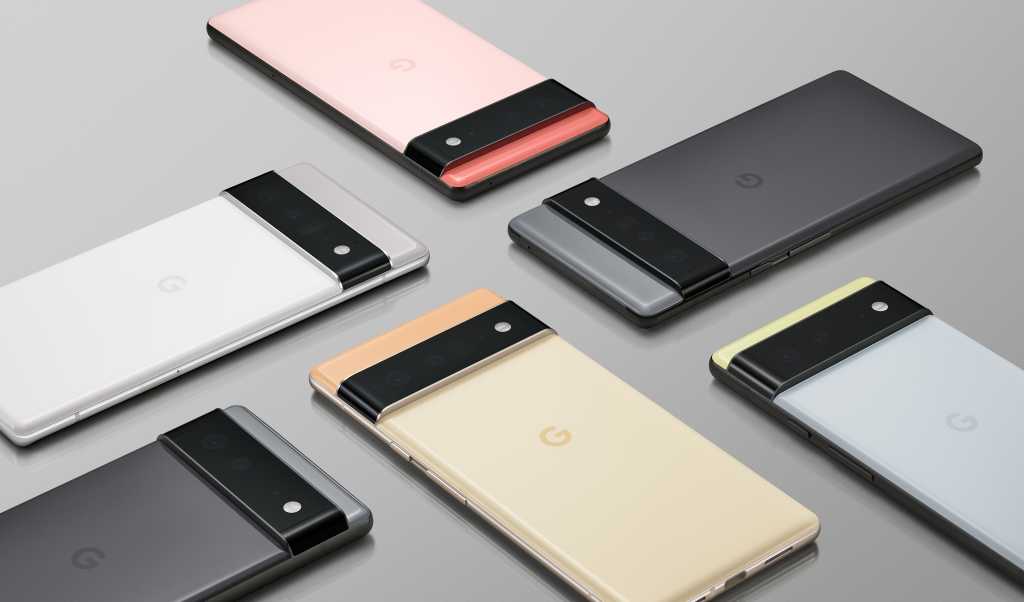 Just hours after Apple unveiled the new MacBook Pro with the M1 Pro and M1 Max processors at its “Unleashed” event, it was Google’s turn to grab the spotlight with the Pixel 6 and Pixel 6 Pro. And while the events brought very different products, Google’s strategy with its newest phones seemed awfully familiar.

It’s not like anyone will mistake the new Pixel for an iPhone. After looking like a cheap iPhone knockoff for years, Google finally broke out with a unique design that actually looks pretty good. The marquee feature is the camera bar, a bulbous strip across the back of the phone that houses a row of cameras. It’s a nice departure from the square array used by the iPhone and previous Pixel and Galaxy phones and gives the Pixel 6 real character.

But aside from how it looks, the new Pixel phones are more Apple-like than ever. For starters, they have a Google-made chip. Dubbed Tensor, Google claims it’s up to 80 percent faster than the Pixel 5, but it’s less about speed than it is about the things that Google does best but bringing it onto the device: AI, computational photography, and power efficiency.

Tensor isn’t just Google’s first CPU, it’s also a recognition that off-the-shelf processors are limiting. Qualcomm’s Snapdragon 888 may be fast and power-efficient, but it falls short for the things Google needs it to do, not unlike Apple’s Intel troubles. By making its own CPU, Google is able to build a phone from the inside out and focus on the features that make the Pixel stand out. It might not be the fastest Android phone you can buy, but it’ll be the most capable.

When Apple introduced the A4 in the original iPad, its focus was on speed and battery life. Apple called it “a remarkably powerful yet remarkably power-efficient mobile processor” and praised its multitasking abilities. It took several generations for the A12 Bionic to showcase the real benefits: camera processing and neural networking.

Google’s Tensor chip is already in a stronger position, and it could become one of the best smartphone chips on an Android device. For the first time, Google controls the whole stack (as they say), and like the iPhone, Tensor could separate the Pixel from the pack. Google already blows away most of its competitors with its AI and photo processing, and a dedicated chip could do more for the Pixel than the A-Series chip does for the iPhone.

We already know the Pixel 6 will bring a fantastic camera and the best Android experience, but the Tensor chip could finally deliver an experience that rivals—and maybe even surpasses—the iPhone. For the first time, Google has built a phone that’s more Apple than Android, and it could mark a major shift in the smartphone landscape.

Leaning into the ecosystem

Google has been making two sizes of its Pixel phones for years, but with the 6 it’s taking a page from the iPhone by separating the two models into Pro and non-Pro models. Aside from a better front camera, the differences are similar too: a third telephoto camera, larger and faster display, more RAM, a bigger battery, and different colors.

Apple has successfully driven up the iPhone’s average selling price and pushed people to the Pro models and it’s a strategy that should work for Google, too. Google is charging $599 for the Pixel 6 and $899 Pixel 6 Pro, which is a large enough gap to make the Pixel 6 feel like a bargain and the Pixel 6 Pro feel like more of an upgrade than it actually is.

Google is also offering a very Apple-like payment plan for the Pixel that’s a brilliant mash-up of Apple One and the iPhone Upgrade Program. Here’s how it works: For $45 (Pixel 6) or $55 (Pixel 6 Pro) per month, you get 200GB of Google One storage, Preferred Care, and subscriptions to YouTube Premium, YouTube Music Premium, and Google Play Pass for two years. At the end of the two years, you can upgrade to a new Pixel or keep your existing one.

Here’s how much each would cost individually:

That’s a savings of $7 a month for the Pixel 6 and $11.50 a month for the Pixel 6 Pro. It’s like if Apple had an iPhone Apple One plan that offered AppleCare+, Apple Music, Apple TV+, and Apple Arcade, which would be a fantastic bundle. Instead, the iPhone Upgrade Program is little more than a payment plan with no actual savings.

The Pixel Pass is more than a discount. Google’s Pixel Pass takes Apple’s ecosystem lock-in to a new level by combining hardware and software in a unique way. No other Android phone offers the software and services that Android does, and if the Pixel can finally deliver a hardware experience to match, it might be a true competitor to the iPhone.

It’s no secret that Apple makes most of the smartphone profits and has the most successful phones on the planet. Apple’s strength isn’t just in design and features, it’s about building an ecosystem they enjoy being locked into. Google is trying to do something similar with the Pixel 6—and some iPhone users might find themselves changing keys.