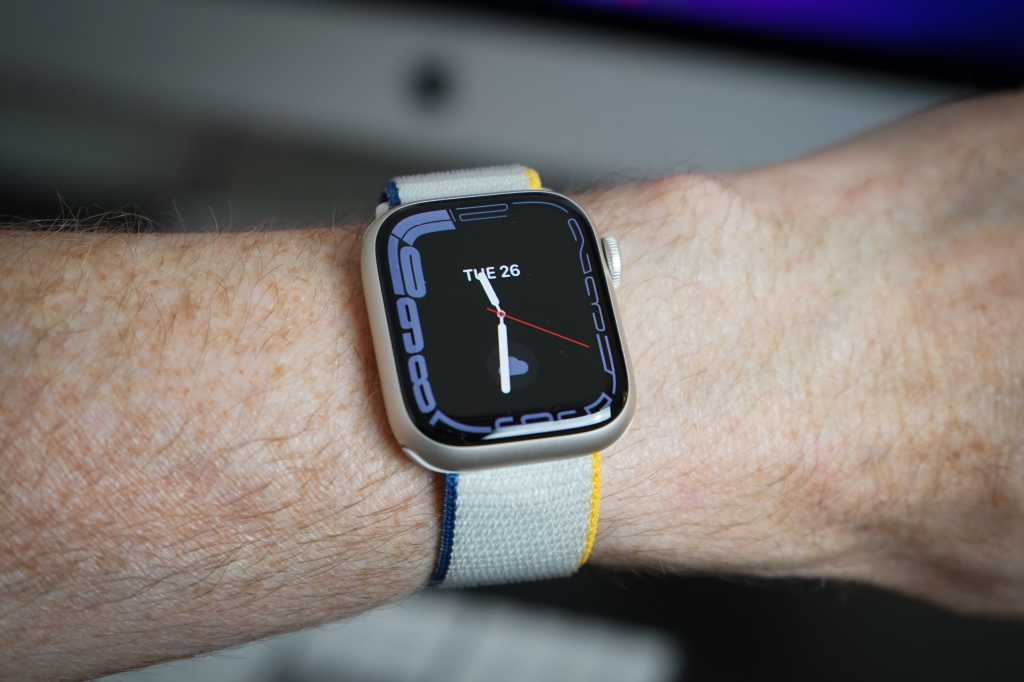 This is a Series 6 with a slightly larger display. That makes it better, technically, but it’s a disappointingly small improvement that has us thinking Apple should have skipped a year.

It’s not often that a major new Apple product could be fairly, and completely, reviewed in a single tweet. This may come as close as any ever has: “It’s a Series 6 with a slightly bigger display and faster charging,” is far less than 250 characters.

But it feels like a stretch to find other things to say about the Series 7. This could be the least-significant yearly update to the Apple Watch ever, and while that in no way makes it bad (this is still the best smartwatch around) it’s hard not to be disappointed.

The star of the Series 7 is the display. It’s about 20 percent larger than in the Series 6. Most of this increase in size comes from thinner bezels, but the case is also ever-so-slightly larger. The always-on display is also a lot brighter outdoors—by 70 percent, Apple claims.

A 20-percent increase in screen area is enough to be obvious at a glance, but it’s not life-changing. The jump in area from the Series 3 to 4 was more significant, I think. The slimmer bezels are quite nice and it’s clear this is the way forward for Apple’s smartwatch, but you shouldn’t expect it to drastically alter the way you use Apple Watch. And while it’s nice to have a brighter always-on display when in direct sunlight, it won’t make a huge difference in your day-to-day use.

As someone who needs reading glasses, I can definitely appreciate the fact that all the interface elements and text are larger on the Series 7 thanks to the bigger display. For the first time, Apple has optimizedthe watchOS interface for a specific watch, and if I’m being honest, the interface the only real upgrade here. Everything else about is minor to the point of near-irrelevance.

What we want more than anything else in an Apple Watch is dramatically better battery life. Apple’s competition has multi-day battery life, and while there’s no Fitbit with nearly the same capabilities as an Apple Watch, that sort of longevity really changes how you use your watch.

We didn’t get more battery life this year. Rather, we got a new USB-C charging cable and some new electronics that allow for faster charging. Sort of.

You need a 20W USB-C power adapter (no power adapter is included), and with that, you can get up to 33-percent faster charging. That means charging from zero-80 percent full in about 45 minutes instead of an hour or so.

Faster charging is always nice, but I didn’t find the Series 7 charged faster enough to be all that noticeable. Apple says you can get a full eight hours worth of sleep tracking in just eight minutes of charge, but the same amount of battery life only took about 10 minutes with earlier Apple Watches. If I could “charge up for the day” in 15 minutes, it would make a real difference in my Apple Watch usage. Instead, a day’s charge still takes about an hour. I put it on the stand, do something else for a while, and pick it back up later…same as I always have.

In other words, the battery life isn’t any different and the faster charging is not really improved enough to change the way you use the device.

Still in a league of its own

There are a few other tiny differences in the Series 7. The front glass is a bit thicker and more crack-resistant. The silver and space grey colors have been replaced with “starlight” and “midnight” shades that are close enough to silver and space grey to annoy you that they’re not silver or space grey. The blue shade is lighter than it was on Series 6, and looks worse.

Besides slightly worse colors, you’ll notice the display is a little brighter indoors, and there are a few new watch faces that don’t really need to be exclusive to the Series 7 but are, at least for now.

Everything else is the same. The design is nearly identical, the processor is the same, the sensors are all the same…there’s simply not much new in this release. When we reviewed the Series 6, we wrote that the changes “might not seem like much if you’ve been using a Series 4 watch or earlier,” and the Series 7 is even less of an upgrade.

Does that make it bad? Not at all! The Series 7 is still a better smartwatch than anything else on the market. Giving us the same thing with a slightly larger display is objectively better, and therefore, it’s the premium smartwatch we’d recommend.

You can skip this one, and Apple should have, too

If you have an Apple Watch that is three or more years old, this is a fine upgrade. It may not be very different from the Series 6, but there’s no real reason not to get the Series 7.

Despite that, I find myself put off by the lack of ambition, production issues, or poor execution, or whatever it was that caused Apple to release a whole new, latest-and-greatest Apple Watch that only has a slightly larger display and slightly different colors.

Maybe Apple has refined this miniature wrist computer so much that it simply isn’t possible to make more substantive changes every year. And that’s okay! Apple could release a new Apple Watch every other year with more significant changes and upgrades, secure in the knowledge that the rest of the smartwatch world is far enough in the rearview mirror that they won’t catch up.

So here we are, with a perfectly great Apple Watch whose existence I almost resent. I like it, I even recommend it to anyone with an old (or no) Apple Watch. And yet I wish Apple hadn’t released it, opting instead to sell the Series 6 for another year until it could offer a more significant upgrade.