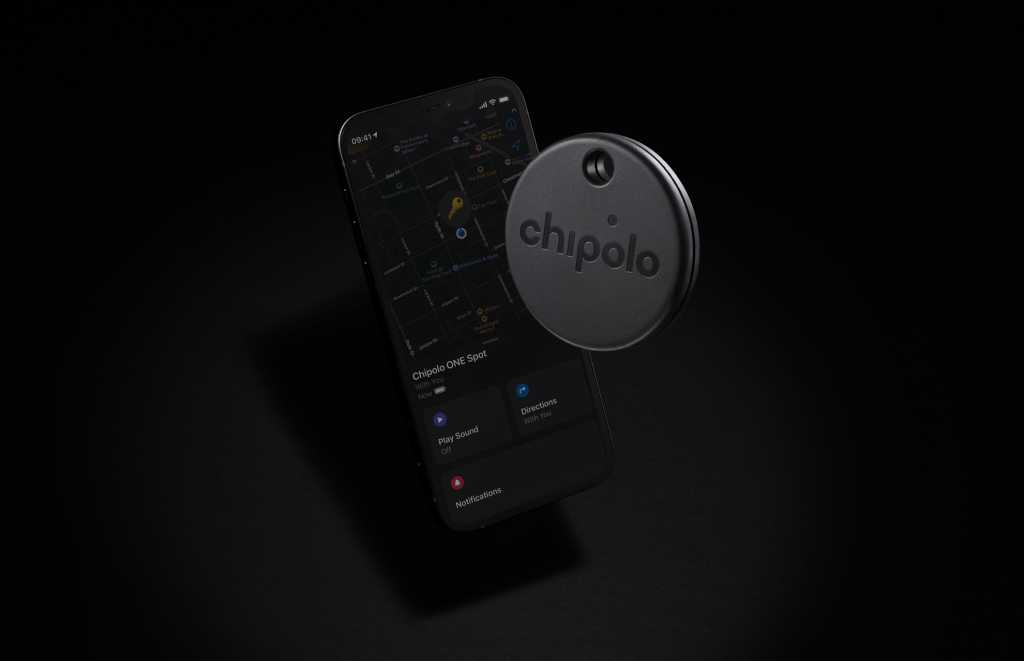 Chipolo
At a glance

The Chipolo One Spot lets you track your belongings over Apple’s Find My network.

The Chipolo One Spot offers highly accurate location tracking using Apple’s Find My crowdsourced network. It’s nearly as good as Apple’s AirTag in some regards and better in others. Chipolo provides a worthwhile alternative in the small category of tiny, low-power, long-lived trackers.

That’s a nifty feat from a company vastly smaller than the multi-trillion-dollar Cupertino behemoth. Apple licensing access to its Find My network makes this possible—even if the company might have done so under duress.

Apple’s AirTag introduced a new degree of capability to an existing category of device: a low-power Bluetooth-based location tracker that could help you find lost, left behind, or stolen items to which it was attached or embedded in, like in a knapsack, purse, or car.

The AirTag built on Apple’s Find My network, a crowdsourced system that lets hundreds of millions of iPhones, iPad, and Macs relay encrypted Bluetooth transmission from expensive hardware and AirTags. Tile and Chipolo had previously released similar trackers, but they rely on the network of either Tile or Chipolo users to achieve ubiquity. Apple had scale.

Apple offers Find My for both what it calls “devices” and “items.” A device is an iPhone, iPad, Mac, or Watch, and certain Apple and Beats earbuds and headphones. Any device can either determine its location directly (via satellite, cellular, and Wi-Fi with an iPhone) or through a nearby paired device (as with AirPods Pro since a firmware update that was part of iOS 15.1/iPadOS 15.1). Devices that can’t reach the internet to post location updates will broadcast a Find My network signal to nearby devices instead.

The AirTag and Chipolo One Spot are both “items.” This category only broadcasts its encrypted Bluetooth ID. No Find My item can directly connect to the internet, but they can talk to a paired iPhone or iPad via Bluetooth if within range. A Find My item requires either its paired device or a nearby iPhone, iPad, or Mac opted into the Find My network to relay its location.

Apple designed the Find My network for security and privacy. Both devices and items that use it broadcast only a randomly-generated Bluetooth identifier that only the owner of the device can effectively decode. This ID changes at intervals to avoid providing a persistent identity someone else could track. Nearby relaying devices record the Bluetooth signal, pair it with location information they derive from one or more sources, and then upload an encrypted bundle of Bluetooth ID and location to Apple.

In a native Find My app in iOS, iPadOS, or macOS, a Find My item’s owner can see the current location as provided by a relay. The native app is required because the encryption keys necessary to retrieve the tracking bundles from Apple and decode the location information are stored only on user devices—Apple has no access to them.

Tile and Apple are in an ongoing clash over Apple’s control of its ecosystem, but Chipolo decided to join up instead of fight. The Chipolo One Spot shows that a third party can compete against Apple on its turf. That’s strategic on Apple’s part, but it still means you have a choice, and one that’s slightly cheaper than Apple’s and has a key-ring hole to boot.

Chipolo One Spot knows where it’s at

The Chipolo One Spot has a lot in common with the AirTag. Both are the only pure trackers that can use the Find My network. Apple trumpeted three Find My network licensees back in April, and those remain the only ones: the other two are Belkin for its Soundform Freedom wireless earbuds and VanMoof, which incorporates Find My into ebikes.

The One Spot is a flat black disc 1.25 inches in diameter and 0.25 inches thick with IPX5 water resistance. It uses a standard lithium-ion coin-cell battery that should last about a year and is easy to swap out. Though it makes its non-Find My trackers in other colors, black is your only choice with a One Spot. The company’s logo is debossed slightly and has a slight shine to it. A keychain hole is above the logo.

With no exterior markings, the One Spot easily avoids being…spotted. In fact, my 14-year-old attached one to their noise-canceling headphones to avoid losing them if they misplace them at school. The matte-black finish blends in almost seamlessly with the headphones ear cups.

Pairing a One Spot requires slightly more effort than with an AirTag. In the Find My app in iOS or iPadOS, tap the + (plus) sign in any view, and tap Add Other Item. Squeeze the middle of the One Spot to depress an internal button and trigger its discoverability. iOS/iPadOS recognizes the tracker and guides you through pairing it, including naming it and assigning an emoji, if desired.

Once paired, the One Spot appears in the Items view in the native Find My app in iOS, iPadOS, and macOS. Because of the device-based encryption used with the Find My network, you can’t use the Find My iPhone web app at iCloud.com for the One Spot or any Find My item.

Chipolo decided to put a loud sound-generation system inside the slim One Spot package, just like its non-Find My trackers. Chipolo says it peaks at 120 decibels (dB), or the level of a plane taking off; Apple doesn’t disclose this spec. In testing with an iPhone-based meter, the One Spot spent most of its time near 80 dB and peaked at 85 dB, or between vacuum cleaner and lawnmower territory, while an AirTag was largely in the 65 dB area with a series of brief peaks around 85 dB.

The more consistent loudness of the One Spot was striking, however: its slightly higher pitched and definitely more annoying pattern seems more like to capture attention than the more polite AirTag.

Anyone who has associated a Chipolo with their iPhone or iPad can trigger it to play a noise if it’s in the vicinity. They can also mark it as lost, whether nearby or not, allowing them to provide more contact information to someone finding it. They can also set their iOS or iPadOS device to notify them if they leave the tracker behind—and their computer, bag, or something else important with it.

The company has left out two things found in an AirTag: an ultrawideband (UWB) radio for precision short-range finding and an NFC transceiver for near-field or tap-to-access features. UWB in an AirTag works with a dozen feet or so, making it useful for finding a missing item that’s not obvious; I don’t notice its absence from a One Spot.

NFC in an AirTag lets Apple offer tap-to-link functionality on an iPhone or any device with an NFC reader: the AirTag has an embedded URL that uses an encrypted path to reference its internal serial number. That URL links to additional information if someone finds an AirTag. However, someone has to know an AirTag works that way to try it.

With a Chipolo, someone finding a One Spot can only identify it from an iPhone or iPad using a lengthy set of steps:

That’s a lot to ask, but someone finding a One Spot would ostensibly search online for what a “Chipolo” was and find those steps, just like they might ID an AirTag and search for its details.

Chipolo has to follow Apple’s rules for the Find My network, as Apple manages all the data flow. That includes all the anti-tracking techniques Apple has embedded in the system. If an iPhone or iPad notices the same device is traveling with it over a period of time, it triggers a notification. That iPhone or iPad can then play a sound on the One Spot. (Apple promised an Android app later in 2021 that could monitor for items traveling with someone, too, and the year is nearly over.)

Under Apple’s rules, the Chipolo tracker also produces a loud sound at intervals starting 8 to 24 hours of being separated from its paired device as a way to ensure it can’t be used as a silent stalker.

Why pick a Chipolo One Spot instead of AirTag?

Apple’s AirTag is a perfectly good piece of technology, but it has a very particular design. If you want a small object that’s silvery on one side and shiny plastic on the other, and which has no key-ring hole, it might do the job. Apple does include engraving on the AirTag’s white side at no extra cost, not an option for a One Spot at all.

But if you want a flat matte black disc that can be attached to a keychain without the additional expense or trouble of a holder, and that produces a very loud noise while remaining unobtrusive to those who might try to grab your stuff, the Chipolo One Spot is an excellent choice.