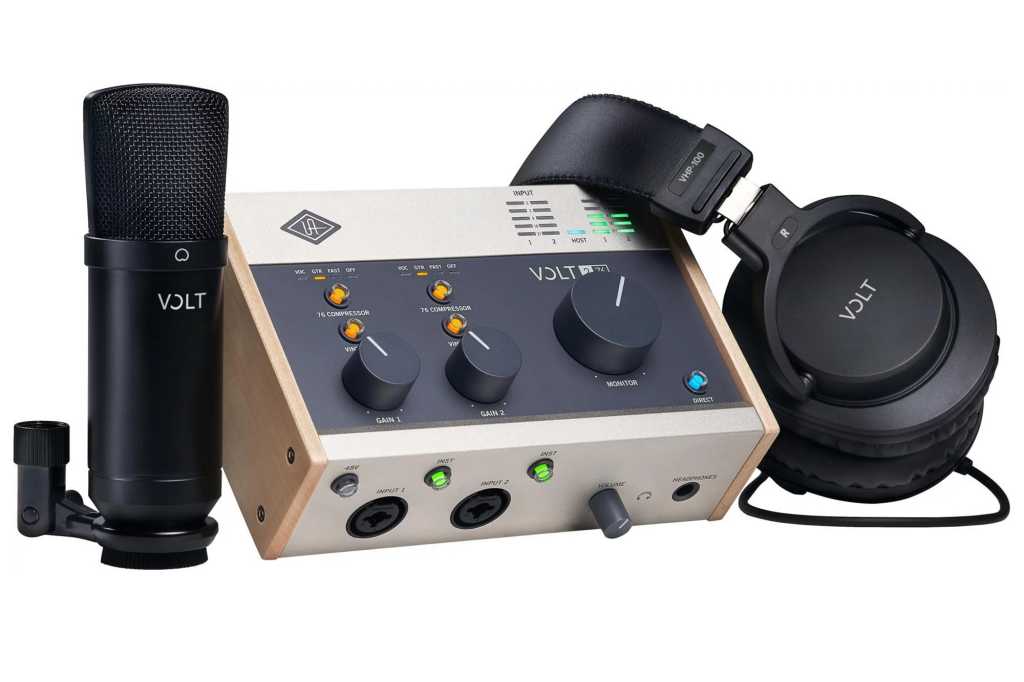 Though it’s a bit pricey, the Volt 276 Studio Pack offers good value due to its great sound, and surprisingly capable microphone. The capper is its highly useful onboard vintage preamp and compressor input effects–the two most commonly used in recording.

The new Universal Audio Volt 276 Studio Pack is a starter kit for people who want to get into broadcasting (like on YouTube or podcasting) with a minimum of fuss—however, it’s hardly amateur or entry-level. The Pack includes Universal Audio’s Volt 276 USB interface, a condenser microphone, an XLR cable, and headphones.

The Volt 276 interface itself is as good as or better than anything in its price range, and the microphone is surprisingly good for a $429 kit. There’s also a software bundle that covers the basics very nicely. As for the headphones, well, they will do for a start.

If you have your own microphones, headphones, etc. you can pick up the Volt 276 interface on its own for $299, and there are a couple of reasons why you might want to if you want to minimize post-recording work—the 276 features vintage preamp and compressor emulations. Universal Audio also has Volt interfaces with fewer inputs and features for as low as $139 (all have the preamp, while Universal Audio’s x76 models add the compressor). The 4-in/6-out 476 model for $369 which would be my recommendation for the musically adept.

The 276 is a two-channel (two inputs/two outputs) USB-C audio interface that’s styled in gray, white and light wood. It measures 7.28-inches wide, by 5.11-inches deep, by 2.55-inches tall and weighs a rather substantial 1.74 pounds. It sports a metal frames to ward off radio interference.

The inputs are combination type XLR/1/4-inch so you can insert microphone or instrument/line-level cables. There are gain controls for each input, as well as a “vintage” and “76 compressor” buttons. The former invokes a circuit that emulates a UA 610 vintage preamp, and the latter a UA UREI 1176 compressor with three settings to cover vocals, guitar, etc. The real devices are rather famous in the industry and you’ve no doubt heard tracks recorded using them thousands of times.

On the front, along with the inputs, are a 48V button for phantom power (condenser mics require this) and two buttons to switch the inputs between instrument and line level. There’s also a headphone jack and a headphone level dial. Note that the 48V function is slowly ramped up to avoid pops. Nice.

On the back are two balanced (phase opposite signals travel two wires) TRS (Tip/Ring/Sleeve) outputs, as well as the power jack, and old-school MIDI in and out. There’s even an on/off switch so you can save juice when the interface isn’t needed. There’s also 5-volt input for a power adapter should your USB bus be a 90-pound weakling, or more likely–you want to use the interface without a computer. A 5V to USB cable is provided.

The included microphone is a large-diaphragm condenser, broadcast form-factor type that comes with a stand mount and cable. The headphones are just your basic black, over-ear types.

You’ll also need to create numerous accounts (including iLok) to install the bundled software. That’s par for the course these days, but you wind up with several web installers and lord knows what kind of telemetry is going on. Uninstall them where possible. If you have your own software, and are of course using macOS, you can avoid this.

The Volt 276 uses a Cirrus CS4272 AD/DA converter, which is common in this space. It’s an older but worthy design and this is an excellent implementation.

I listened to the Volt 276 alongside a Universal Audio Apollo TwinX Quad ($1,500) and Focusrite Clarett Pre 4 ($600) and it held its own. I was especially pleased with the extremely low noise on both the mic and line/instrument inputs. I didn’t try an SM7B, but the SM57 I did try is almost as gain-challenged and there was nary a whisper of hiss at record level.

Overall, the 276’s output is about average for the class—average in this class is fantastic these days. Blind test the panoply of audio devices on the market and you’d be hard-pressed to spot a significant difference. 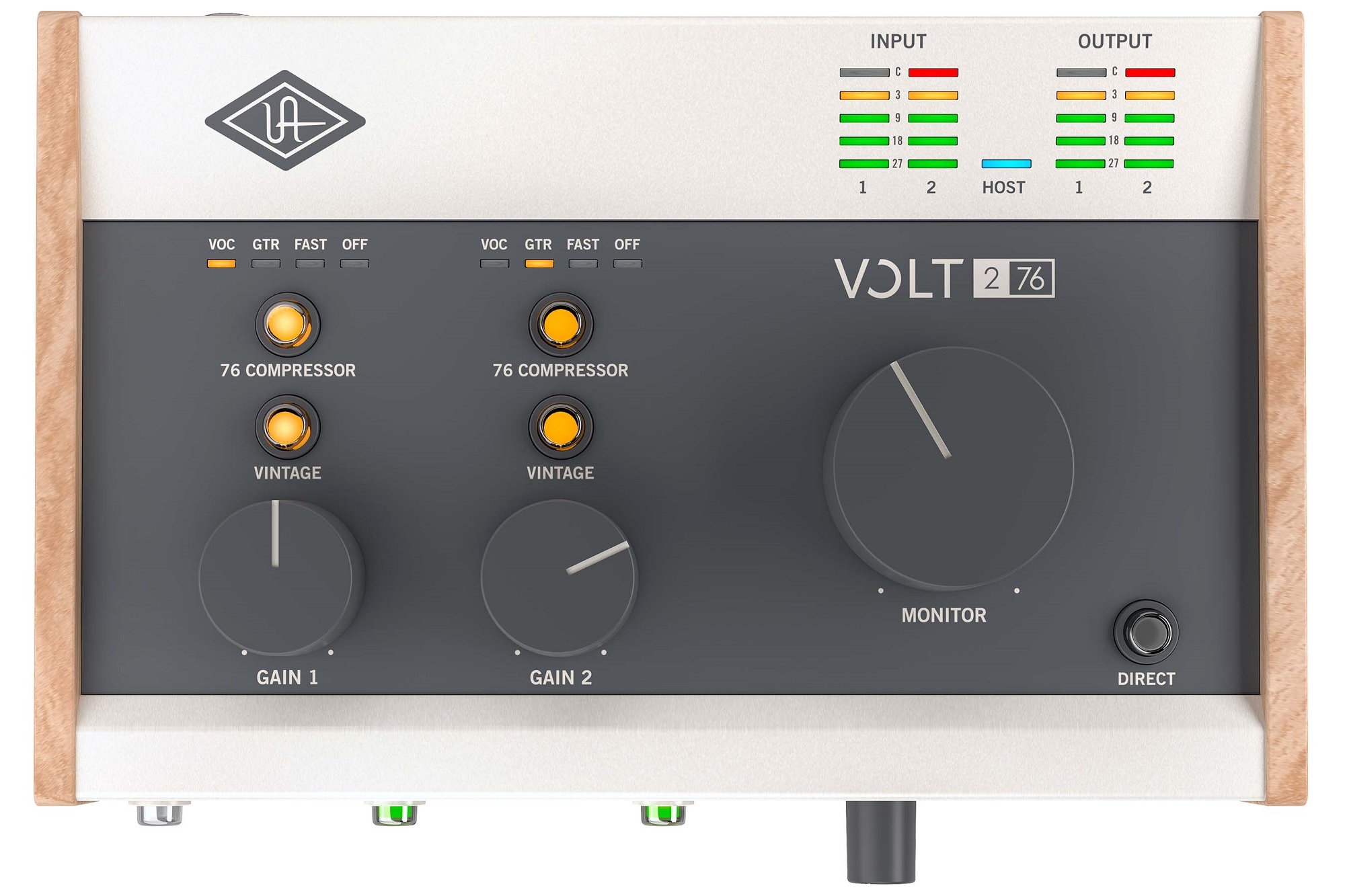 Where the Volts set themselves apart are on the input side. The vintage pre-amp and compressor emulations are major differentiators and most interfaces don’t have anything to match. Every pro-level recording I ever engineered or assisted used a microphone preamp and compressor on every vocal track and compressors were on every acoustic instrument track (when we had enough!).

Tastes vary, but I quite liked the way the vintage preamp sounded. It adds highs, boosts the bass slightly from 80 to 100Hz, and performs a very mild mid-scoop around 500 to 1000Hz. There’s also mild saturation distortion that increases with input gain. Note that you’ll want to use the preamp sparingly as you’ll clutter up the lower and upper frequencies if you employ it on everything.

The three hard-wired compressor presets sounded quite nice, as well, though they’re subtle. Tamping rather than squashing. That might be good for newcomers who tend to slam down on everything to the max the first time they play with a compressor. I found it extremely useful for both acoustic guitars and vocals, mostly the latter.

Note that the compressor increases the signal strength considerably so if you’re on the edge before you engage it, decrease the gain or you will start clipping. I found this gain change a bit disconcerting, as attention to detail is excellent in other areas.

Note that there is no DSP on board the Volt interfaces that can run UAD plug-ins as with UA’s far more expensive Apollo interfaces—the effects are hardwired to the inputs. You must be comfortable applying effects at record time. If you’re not, you should become so—it’s a colossal time saver.

The microphone was a pleasant surprise. As noted, it’s a largish condenser type that requires 48-volt power, and in combination with the vintage preamp, it sounded quite good. I tested it alongside a Nady RSM-4 ribbon mic, Rode NT1-A, and Shure SM57. It reminded me of a cross between the SM57 and the Rode NT1-A. A little more top end than the former, and a little less than the latter. It’s perfectly usable and I’d be in no hurry to upgrade.

The Volt headphones on the other hand, while not the worst I’ve heard, are eminently replaceable. They’re reasonably comfortable and they’ll get you started, but the frequency response is heavy on the bass and light on the treble. This could work to a newcomer’s advantage by warding off neophyte tendencies to over-emphasize the former and neglect the latter. It might not. I’d like to have seen a bit better sound from this component.

The cables are good quality, so no complaints there. The headphone output has plenty of headroom, more than enough to drive high impedance headsets.

Note. If you’d like more granular info on gain, noise, latency, etc. check out this review on YouTube by Julian Krause.

The Volt 276 Studio Pack is a great place to start for a budding podcaster or YouTuber. The interface is excellent for the price range, and the effects, while subtle, will give your recordings a very nice polish. For advanced users and musicians, the Volt is all about the top-notch input effects. If you find them appealing or useful, they’re a very good reason to buy a Volt. If not, you can save a lot of bucks and/or get more connectivity with a similar MOTU, Audient, SSL, Focusrite, etc. interface.