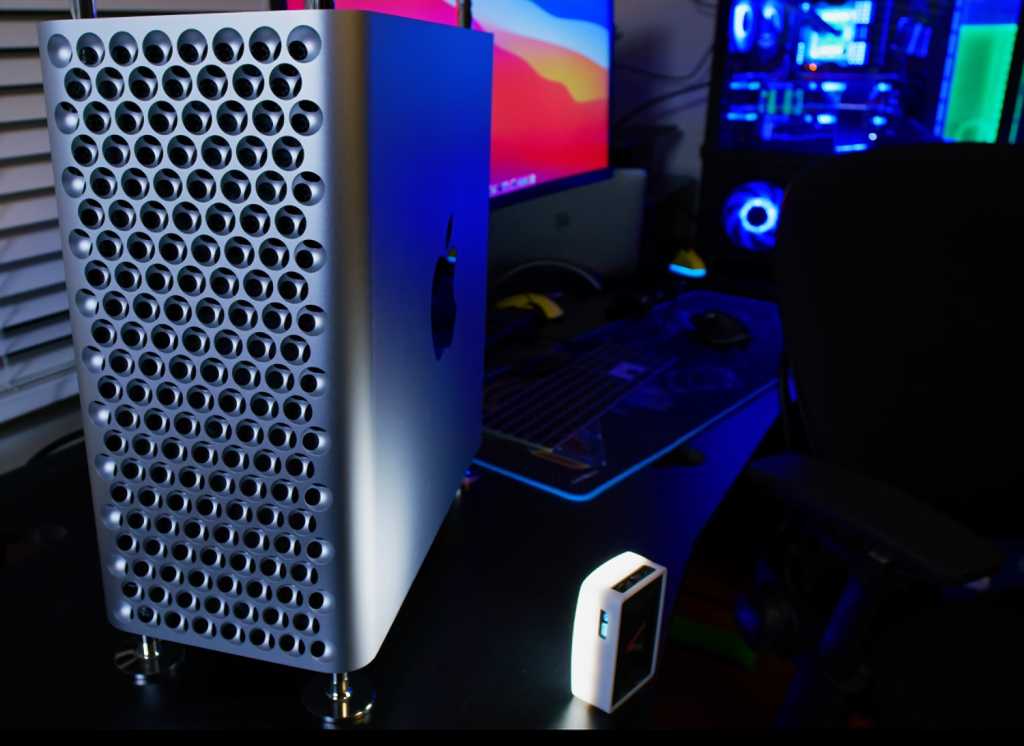 Apple is in the midst of a two-year rollout of its own Mac processors, with the first Mac System on a Chip (SoC) blowing away expectations. The entire company’s consumer lineup is outfitted with the incredibly fast M1, and with the recent release of the M1 Pro and Max in the MacBook Pro, we got a taste of what Apple can do with its silicon to meet the performance demands that pro users put on high-end Macs.

When it comes to pro Macs, however, the model that most readily comes to mind is the Mac Pro, Apple’s high-end workstation. What optimizations does the M1 Max have that will dictate the demise of the old Intel guard? One important battle will come down to the graphics processor, which is traditionally the most power-hungry Achilles’ heel of workstations. Will optimizations in codecs such as ProRes, coupled with having a super-fast interconnected SoC be enough for the next Mac Pro to overcome the reliance on GPU processing?

The top-end Intel Mac Pro has a 28-core Xeon W CPU and has options for an Afterburner accelerator card and high-performing graphics cards. At first glance, the M1 Max’s 10-core CPU and 32-core GPU seem paltry by comparison, but they are accompanied by secret weapons: two ProRes encoders and decoders built into the M1 Max.

ProRes, for the uninitiated, is Apple’s video codec, and it’s becoming more mainstream—you can even shoot video with the iPhone 13 Pro using ProRes. These ProRes components are important in giving Apple an advantage in traditional workstation workflows. Let’s break down what this means compared to the existing Mac Pro.

The $2,000 Afterburner card in the Intel Mac Pro accelerates only the decoding of ProRes codecs and allows you to play multiple video streams of 8K. It also takes some load off the CPU, which traditionally is heavily taxed with ProRes. It does not accelerate encoding, restricting some of its usefulness. The Mac Pro GPUs do have their purpose when color grading, but they’ll be more at home with other codecs such as R3D Raw instead of ProRes Raw.

With the M1 Max essentially including a next-generation Afterburner card–it has two ProRes encoders and decoders–it’s a perfect symbiosis of hardware and software optimization, without needing to resort to brute GPU force.

To see how well it perform, I performed an export of a five-minute 6K ProRes Raw video clip to ProRes 422 HQ in Final Cut Pro. I tested a 2019 28-core Xeon W-based Mac Pro with 96GB of RAM, an AMD Radeon Pro W6800X Duo graphics module, and I tested with and without an Afterburner card. I compared the results to the M1 Max Mac Book Pro, which has a 32-core GPU and 64GB of RAM. As the benchmarks show, the M1 Max produces stunning results.

Impressive, right? Clearly, the ProRes encoders and decoders do their job extremely well when properly optimized in software such as Final Cut Pro or DaVinci Resolve. ProRes is minimally compressed and has large file sizes, which makes playback smooth, even on lesser hardware.

When combined with the proper optimizations, the M1 Max can outclass the Xeon-based Mac Pro with Afterburner, a much more expensive computer. This also demonstrates that Apple’s control of the full ecosystem—the hardware, codec, and software—for the best user experience.

This same speed advantage can be applied across other facets of ProRes video editing. Intensive tasks like noise reduction and stabilization typically are faster on the M1 Max (see benchmarks below). It can also do the Mac Pro party trick of streaming multiple 8K ProRes videos simultaneously. The kicker? An M1 Max MacBook Pro can be unplugged, on your lap, on a beach, in the woods, in a park, on location—anywhere in the world.

What happens with GPU-intensive tasks

What if we compare performance using a more traditional pro-level codec, R3D Raw? R3D Raw is a GPU-heavy codec, optimized for hardware such as the AMD W6800x Duo. In this round of benchmarks, background rendering in Final Cut Pro is off and it’s not allowed to create an optimized ProRes file. This will allow us to see the GPU horsepower at play. The 2019 Mac Pro has an AMD Radeon Pro W6800X Duo installed.

Here the tables have turned. This is the hardware comparison without the ProRes magic–brute force capabilities of each are revealed. The Mac Pro Afterburner card is not used and the ProRes advantage of the M1 Max is wiped out.

For now, professional GPU-heavy workflows still need to rely on computers such as the Mac Pro, since the M1 Max is still behind in that metric. 3D applications and GPU renderers such as Octane X are still faster when using GPUs.

Having said that, the M1 Max is still a huge leap over the original M1, and impressive even with the R3D Raw codec, considering the price and inclusive hardware. An Apple silicon version of the Mac Pro with scalable GPU performance should close the gap further or even beat the existing performance of monster GPUs such as the AMD W6800x Duo in GPU heavy applications.

One important point in demonstrating the M1’s current capabilities: Codecs like 10-bit 422 4K from the Canon R5 have been known to cripple systems such as the Mac Pro and even Threadripper RTX 3090-equipped rigs. The M1 Macs? They make easy work of them because of the included hardware decoders, bypassing the need for brute force GPU oomph. 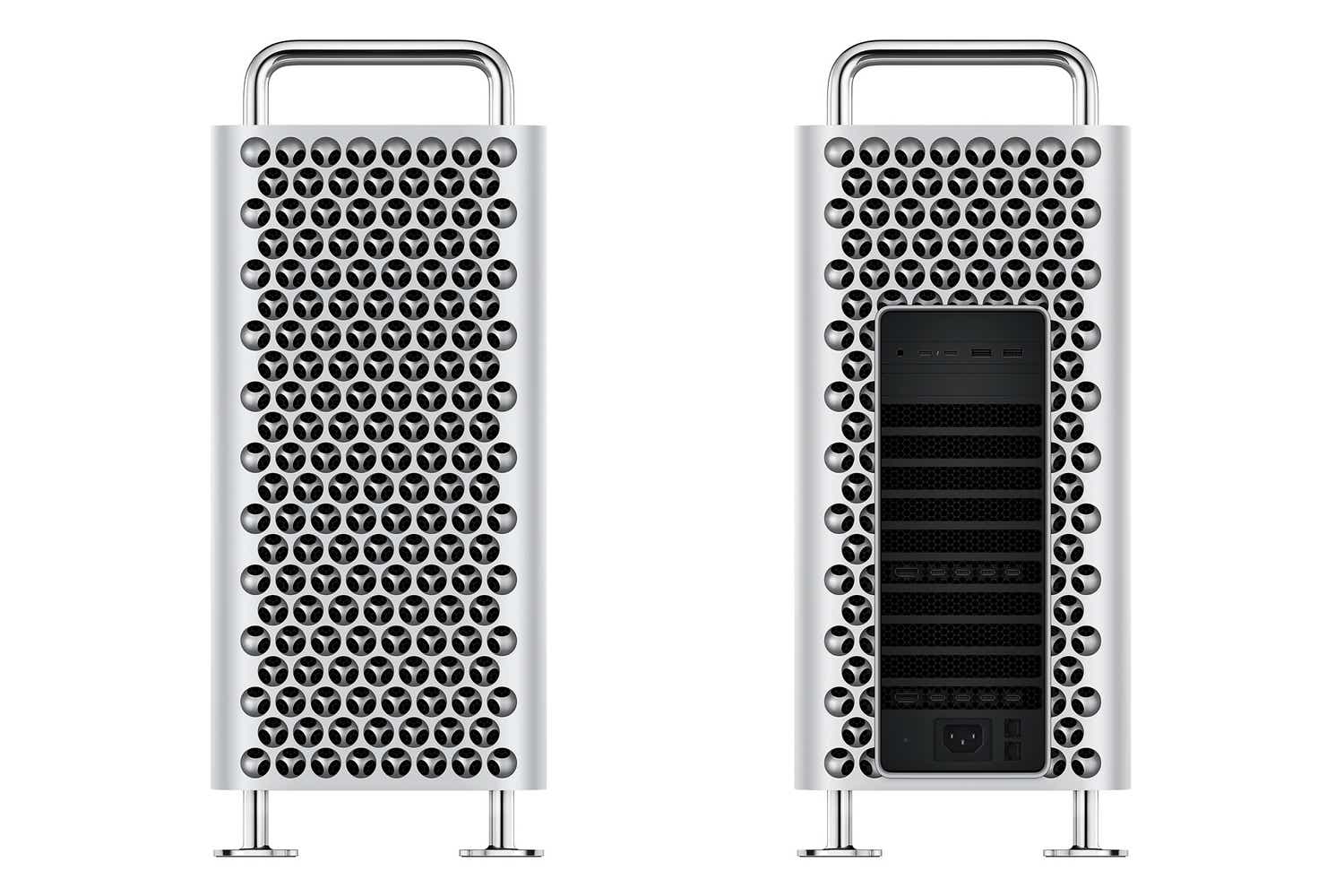 Given Apple’s dominance now in ProRes, it’s no surprise it is such a vital part of their Mac strategy that immediately differentiates performance from existing higher-priced workstations. But the results with GPU workflows provide a glimpse at what a Mac Pro with Apple silicon will need to do to excel with GPU-based workflows.

Current rumors point to a future Mac Pro having as many as 40 CPU cores and 128 GPU cores, along with considerably more RAM. One key benefit of having a SoC is that the communication between parts is much faster and more efficient. For example, the existing M1 Max with 64GB of RAM also shares this with the GPU VRAM, removing the middleman and increasing speed. The same will hold true of a Mac Pro with exponentially faster performance.

Now that we’ve gone through some numbers, there is one key area that makes the 2019 Mac Pro tremendous: flexibility. The 2013 Mac Pro, affectionately called “Trash Can” due to its design, was notoriously limited by its thermal limits and lack of true expandability.

Enter the 2019 Mac Pro, with three enormous airflow fans and enough PCI Express slots to make any pro user happy. Want to add in a PCI Express card for your audio production? It’s easy. If you need more RAM, a faster graphics card, or even a new CPU, it’s all user upgradable. You can even add off-the-shelf GPUs, such as the AMD Radeon 6900 XT, without the need for a proprietary MPX Module. You can dual boot into Windows, too.

An Apple silicon Mac Pro may eliminate some of these needs with its hyper-performance GPU and optimized software. Thermal concerns are likely void, as Apple Silicon is efficient, and the Mac Pro enclosure will typically allow for better airflow compared to the MacBook Pro. And expect the new design to be smaller than the current one.

But there are also many questions about the upcoming Mac Pro. The future Mac Pro will likely still need some form of expandability, with PCI Express slots that are industry standard. How about upgradability? Currently, you’re stuck with whatever spec you’ve optioned for on the M1 MacBook Pro at the time of sale. Even the 2013 Mac Pro offered some user-accessible upgrades if you wanted to beef up your machine at a later date. With the current design of Apple silicon having everything integrated on a chip, we’re not sure how or if Apple will implement any such upgradability that has been vital to the needs of current Mac Pro customers.

Apple has a clear strategy with its Mac lineup: Be the ultimate tool for both pros and consumers alike, especially in media creation. How do they plan to do this while obsoleting traditional high-powered hardware? Their secret weapon is in the tightly knitted synergy with their software such as ProRes codecs, which provide high-quality files and workstation-busting level performance. It’s also in their extremely efficient, but powerful System on a Chip approach that allows for fast, scalable communication.

All of this comes at what should be a more affordable price and better energy consumption compared to the 2019 Mac Pro. This initial cheaper price may be offset by less upgradability, however, making it more likely you’ll need to purchase a new machine when it’s time to upgrade. How Apple approaches this will be just as important as performance is to the pro and enthusiast community for its flagship Mac Pro.