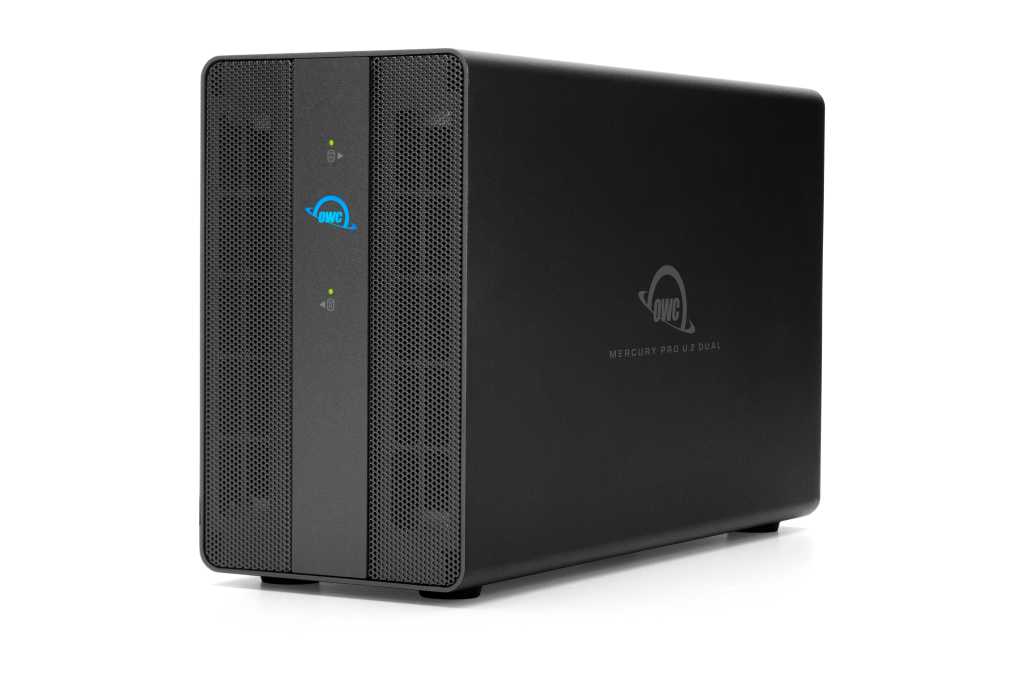 Image: OWC
At a glance

This sturdy two-bay enclosure is solidly constructed, fast, easily upgraded, and versatile–allowing you to configure internal drives any way you want via the included software. A great way to reduce cable clutter when employing multiple external SSDs.

The $300 Mercury Pro U.2 Dual is a Thunderbolt 3 storage box featuring two U.2 (a server/enterprise-level NVMe connector) bays. To add up to the eight M.2 SSDs touted by OWC, you have to use a four-slot OWC Shuttle U.2 to M.2 caddy/adapter included in the box, and then buy another adapter ($150) to max out at eight SSDs and 64TB. Or you can buy it pre-populated from OWC.

For eight drives (fastest) pricing starts at $1,500 for 4TB, and ends at a whopping $12,799 for 64TB. Yup, 8TB SSDs are pricey. Note that running mirrored RAID 1 or mirrored/striped RAID 1+0 will halve available capacity.

Regardless, the bare box allows you to upgrade at your leisure and need, and the included SoftRAID XT software allows you to create RAID 0/1/1+0 arrays with any combination of drives. The SSDs may also be accessed as separate entities, i.e., discrete drives.

The black metal box that is the U.2 Dual measures around 9.25 inches long, 5.75 inches tall (including rubber feet), and 3.35 inches wide. The front consists of porous grills to facilitate airflow through the two bays, with a solid strip of metal up the middle that contains the backlit logo and two activity lights.

The back is home to two Thunderbolt 3 ports (Type-C, one for daisy-chaining), a Kensington lock port, the 12-volt DC jack, and the outlet grill for the fan. To access the internal U.2 bays, you simply remove the two Philips screws from the panel, top and bottom center. The two WD 960GB 2.5-inch U.2 drives that OWC included in our test unit were secured by a single screw, though there are four holes for 3.5-inch drives and the caddies.

The Shuttle caddies are expensive but solidly built and as mentioned, feature four M.2 slots. The removable top of a Shuttle serves as a beefy heat sink that’s secured via four screws. There’s a nice slab of thermal contact material on the inside of the heat sink, so you’ll likely have to press down fairly hard on to align the holes for the screws.

Note that the caddies contains a PCIe switch. Some PCs with limited PCIe resources (lanes) may not be able to accommodate them. Both iMacs (2015/i7 and M1), as well as the older a Core i7-5820K/Asus X99 Deluxe (circa 2015) testbed handled them just fine.

The Mercury Pro U.2 Dual is warrantied for a single year and any drives included in the populated versions for three years.

On our M1 iMac running macOS Big Sur, the Mercury Pro U.2 Dual’s performance varied significantly depending on what drives were installed. With the two 960GB WD Ultrastar DC SN630 U.2 SSDs OWC bundled, sustained transfer rates, as shown below, approached 2TB per second in both directions. This was using Apple RAID.

With a single M.2 NVMe SSD, this dropped to around 1300MBps in either direction. Any one of the M.2 NVMe SSDs we used is capable of saturating the Thunderbolt 3 bus to the point of nearly 3GBps transfers, given a fast enough enclosure. I’m guessing there’s a penalty imposed by the PCIe switch on the caddies. Still, this promised good things ins subsequent tests, however…

Apple RAID (software) with two M.2 NVMe drives in the caddies (striped/RAID 0), slowed significantly to 636MBps writing and 735MBps writing. Ahem. Don’t use Apple RAID with M.2 drives in this box unless you don’t care so much about speed.

OWC’s SoftRAID with two M.2 NVMe drives was far faster than Apple RAID writing, though reading still lagged well behind what a single drive delivered. Note that SoftRAID requires a kernel extension and your permission in the Apple security startup utility to install it.

It was only when I reached four drives in RAID 0 that the unit topped 2GBps. Not as fast as hoped, but plenty fast enough. Increasing to seven drives only bumped up the write speed to 2.2GBps so we omitted that screen cap. OWC provided a second U.2 Shuttle (caddy/carrier/shuttle) so I could test with the full eight M.2 NVMe SSDs.

While the transfer speeds weren’t all that I’d hoped for, the U.2 dual is still easily fast enough for its intended role. I also tried using individual drives to boot to alternate operating systems, another handy (very, in my case) use for the U.2 Dual and Shuttle caddies.

SoftRAID allows you to combine the SSDs inside the U.2 Dual any way you wish, which, as noted, makes it outstandingly versatile. However, I did run into some issues.

After uninstalling the SoftRAID driver from the M1 iMac test bed, not all the eight drives inside the U.2 Dual were enumerated in Disk Utility, or for that matter, on any other computer. Additionally, trying to initialize, erase or create an Apple RAID array with the drives that remained visible after the driver removal either hung Disk Utility or failed.

Sadly, I never found the cause, but it’s a post-facto deal and shouldn’t affect many users. Erasing the SSDs individually using an OWC Envoy Express on PCWorld’s test bed cured the issue.

Note: As of 1/17/2022, OWC informed us that 6.2.1 version of the software incorporates a fix that allows Disk Utility to recognize SoftRAID partitions.

Alas, installing SoftRAID on the PCWorld Windows test bed promptly rendered it unbootable. Thankfully, it created a restore point so the system was recoverable using Windows boot media. However, this little snafu keeps me from recommending SoftRAID with Windows at this time. It also curtailed testing on that platform for comparison purposes.

To provide at least a modicum of context, the fastest sustained transfer rates we’ve seen out of an external Thunderbolt 3 drive are around 2.8GBps reading, and 2.25GBps writing.

Know also that software RAID uses your computer’s CPU. This can and will affect storage performance if the CPU is tapped out doing other tasks. Happily, in my testing with video transcoding and several other real-time music applications running, the drop was only about 100MBps (from around 1.3GBps to 1.2GBps on an Intel iMac) with the two U.2 SSDs installed. I consider that insignificant, but should you encounter a more severe drop in performance, by all means, let me know.

Given Apple’s expensive and capacity limited internal storage, it’s nice to have a fast, powerful, easily upgradeable external solution such as the Mercury Pro U.2 Dual. It’s a fantastically versatile and convenient way to add multiple discrete or RAID volumes without a ton of cable clutter.

As to the SoftRAID issues, OWC is continually improving the product (version 3 of the paid software was just released), so I expect the bugs I encountered to disappear in due time.