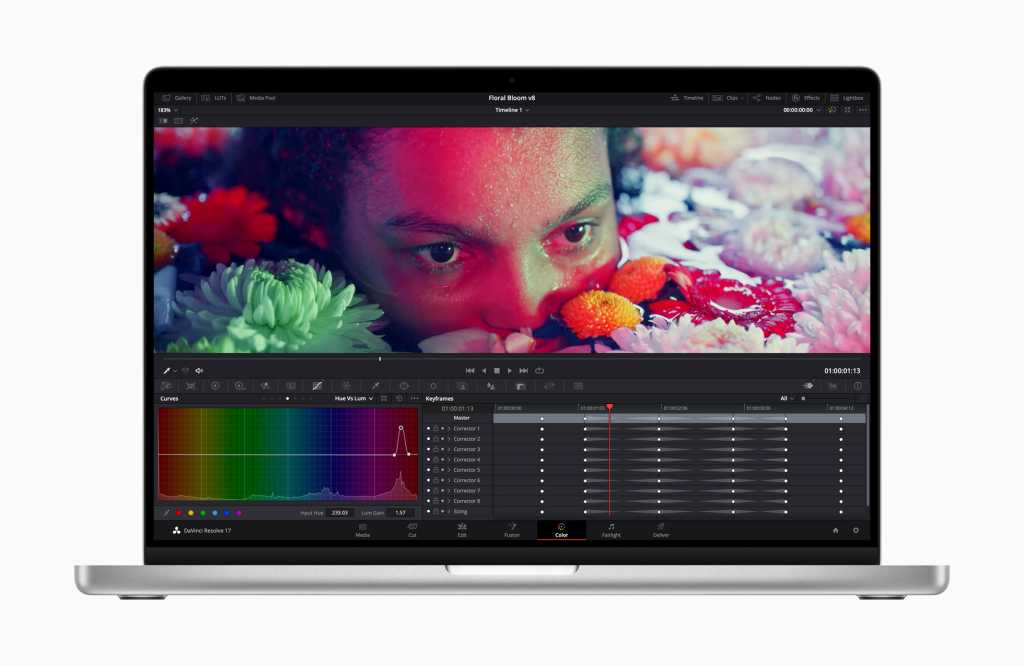 Apple’s new MacBook Pro has garnished what seems to be endless praise for its high performance, power efficiency, and impressive battery life, thanks to the M1 System on a Chip. Apple benefits from tight integration of the software and hardware, which results in optimizations that achieve performance that is traditionally only possible with a brute force approach to hardware.

That hardware and software combination comes into play with video content creation. In its pro Macs, Apple is banking on its ProRes codec to help it cross the proverbial Rubicon of workstation-level performance. Let’s examine the reasons why ProRes is as important to the future of the Mac as Apple silicon itself.

Developed by Apple, ProRes is a video codec that is popular for its image quality and ability to provide ease of use in editing workflows. It comes in various flavors dictating quality and adjustment levels, from the flexible ProRes Raw to the more common ProRes 422 HQ. ProRes uses a minimum amount of data compression, which is the key to its smooth implementation in post-production, but that also means it produces large data file sizes.

Typically, ProRes is used in pro video cameras such as those from Arri and Red, as well as external recorders, such as the Atomos Ninja V. Now, it’s even an option on the iPhone 13 Pro, bringing adoption to an ever-increasing user base.

Postproduction ease-of-use is the primary catalyst for the adoption of ProRes. Many other video codecs, such as the highly compressed H.264/H.265, typically bog down systems that lack the proper hardware support. Thus, ProRes provides generally smoother performance at the expense of higher data across a wider spectrum.

ProRes and the Mac

In its ecosystem, Apple controls the operating systems, the chips in its devices, and, with ProRes, important aspects that affect performance. Therefore, Apple has controls for every aspect of video workflow, from acquisition to editing and final delivery. It’s no secret that many content creators use Mac computers, and many favor the portable MacBook Pro. As for software, Apple’s Final Cut Pro is also popular, but you also have the option of DaVinci Resolve or Adobe Premiere Pro. If you venture too far out of Apple’s Final Cut Pro ecosystem, however, you run into software roadblocks without ProRes Raw support.

To entice users who use R3D Raw and other potent codecs to ProRes, Apple offers incredible performance in smaller-sized hardware with an efficiency that cannot be matched. The decision is to give up some flexibility that is offered by some non-ProRes codecs that are also efficient and relatively easy to edit, for the impressive performance of ProRes in future iterations of Apple silicon.

To reach the highest echelon of ProRes performance on the 2019 Mac Pro, you need the 28-core Intel Xeon W CPU paired with the Afterburner card to accelerate playback and decoding of ProRes. Two beefy GPUs can only help, too–with advanced color grading. All of this comes at a very high cost, of course.

The M1 Max in the MacBook Pro includes two each of ProRes encoders and decoders, far outperforming the single decoder found in the MacPro’s Afterburner card. In a separate article, I’ll take a close look at how ProRes performance shapes up between the M1 Max MacBook Pro and a maxed-out Mac Pro. But here’s a look at the main benchmark results.

The benchmarks demonstrate how serious Apple is about its ProRes performance. It surpassed the top-spec 2019 Mac Pro single-handedly due to the decoders and encoders found in M1 Max. Not only that, but it will also greatly improve the playback performance of multi-stream 8K content. Color grading generally benefits, too, with noise reduction and stabilization in Final Cut Pro being fast. This was traditionally the realm of ultra-powered workstations or the Mac Pro with expensive GPUs, but the ProRes implementation levels the playing field and dramatically lowers the cost of entry.

There’s still room for growth. GPU performance is still not on the same level as a 2019 Mac Pro, which would address other workflows such as R3D Raw and 3D applications such as Octane X. Future Apple silicon should bridge this gap–it’ll also be interesting to see how much faster ProRes performance is, and more importantly, if ProRes adoption grows.

iPhone 13 Pro: ProRes for everyone

Speaking of growth, Apple isn’t only targeting pros with its ProRes codec. The iPhone 13 Pro camera can shoot using ProRes, bringing it to your pocket. Phones have become the most popular cameras in the world, so it makes perfect sense to incorporate the iPhone for maximum optimization. With 10 bit 422, you’ll generally have better quality with ProRes, and editing on Apple’s M1 Macs is as smooth as butter.

The drawback? ProRes content will consume huge amounts of storage space compared to the more compressed iPhone codecs. On the desktop, users can work off network-attached storage and RAID arrays, but on the iPhone, you’ll quickly reach the limits on storage and bandwidth. For now, it’s more of a novelty function, though it could serve as a situational tool that a pro may use. As storage capabilities improve in future phones, look for this to become utilized more frequently by even casual users. But don’t sell your Red or Arri cameras yet!

The iPhone plays perfectly into Apple’s ProRes ecosystem strategy. With its massive user base, the iPhone will be the propulsion engine to accelerate mass adoption of ProRes.

Online content has moved away from static images and towards video—for example, look at how Instagram has morphed from a powerhouse photography platform into one focused on video. And to be a major part of the content creation workflow, the Mac needs ProRes to lead the way into a more efficient, top-performing hardware ecosystem.

Connect the dots further: much of this online content is created using the iPhone, so it’s no surprise that the need for a high-quality codec becomes even more vital. With Apple creating such synergy between mobile devices and their Mac lineup, it only makes sense that ProRes follows to make the user experience much better across devices.

Other factors to consider include the improved image quality of both mobile and Mac screens, and the need for a workflow that can produce results immediately. In all, a ProRes workflow is even more important to meet today’s demands, and Apple silicon and its included optimizations create a path towards mass adoption that’s already underway.