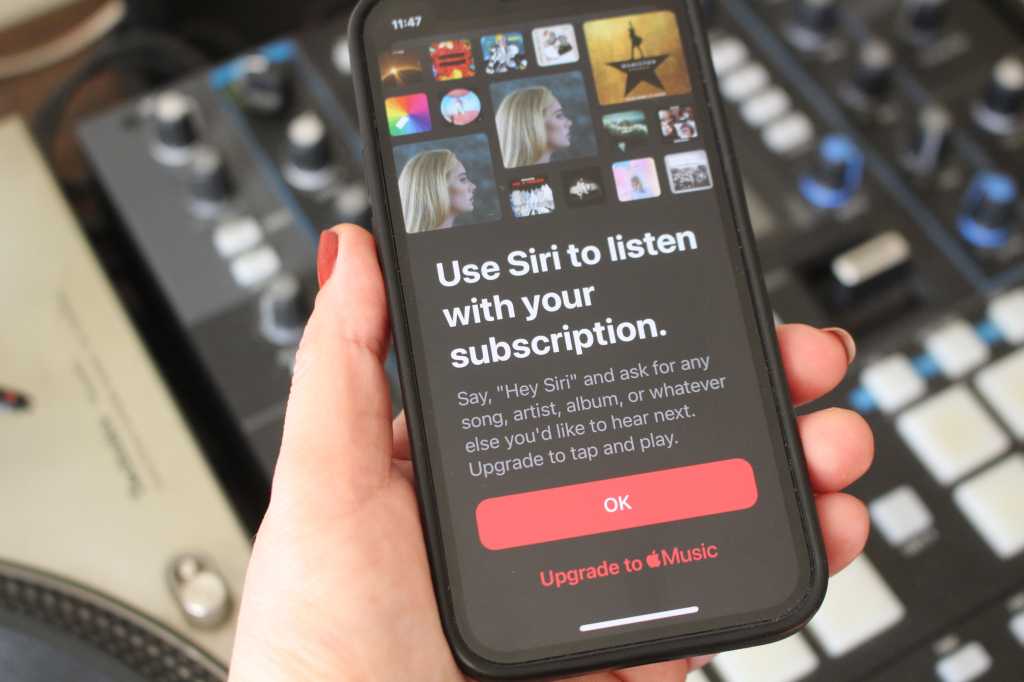 If you try to play a full song in Apple Music with the new Voice Plan by tapping on it in the app, you’ll get a warning that you need to ask Siri to play it instead. Whether or not you’ll actually hear the song you want is another question entirely.

A new voice-controlled Apple Music subscription tier called Apple Music Voice Plan has arrived just in time for all of those new Apple devices under the Christmas tree. Priced at $4.99 per month (as opposed to $9.99 for the full subscription), it’s Apple’s cheapest Music plan and the clearest sign yet that it has no intention of launching an ad-supported tier like Spotify.

Nothing about the Apple Music Voice Plan is conventional. While you can sign up within the Apple Music app, Apple also lets you say, “Hey Siri, start my Apple Music Voice trial” to instantly begin a 7-day no-obligation trial. (You can also ask Siri to play a song, which should bring up a prompt asking if you would like to start a trial.) You don’t need to have a credit card on file or remember to cancel a recurring subscription, though you can get three months free if you turn on auto-renewal.

Naturally, the lower price brings fewer amenities. Unlike the full Apple Music subscription, Apple Music Voice Plan does not allow you to make personal playlists, so you’ll need to stick with the ones that are already in the system. Thankfully there are a lot of them spanning all ends of the musical spectrum, though other features like Spatial Audio and the time-synced lyric are also missing. But the biggest thing that’s lacking is the confidence that you’re going to hear the song you want.

With a sparse interface, you’re encouraged to start listening right away with Apple Music Voice. I began my search in the Radio section, where Apple’s own Music1 radio station broadcasts live all day. I then scrolled down to the Local Broadcasters area to get a taste of different stations from around the world. This isn’t a feature that’s exclusive to Apple Music, but it’s nice to be able to choose stations from several services, including TuneIn, iHeartRadio, and Audacy.

I quickly browsed past several of my favorite stations and landed on an unfamiliar one, Radio Meuh, an internet electronic music station from the French Alps. Making my selection, I continued to scroll around the Local Broadcasters section when a voice on Radio Meuh leaped out at me and sang, “Stop scrolling and connect!”

I was legit taken aback for a second thinking Siri was keeping musical tabs on me, but I quickly realized that it was all a coincidence. It was a song actually called “Stop Scrolling and Connect” by Londoner Ziggy Funk that just happened to be playing at just the right time.

But while Siri won’t admonish you through song, it will clap back if you try to tap a song to play anything other than a preview snippet. Siri is your guide through Apple Music Voice, and it does a mostly acceptable job. I asked Siri to play various genres of music—disco, house, drum & bass, rock, punk, and reggae—and was given appropriate stations for each. And when I asked it to specifically “play some music for sleeping,” I got a laidback meditation station, so Apple has clearly given a lot of thought to the kinds of things Voice subscribers will ask Siri to play.

Siri has a lot to learn

Other Siri requests weren’t so successful. Though I attempted to speak slowly and clearly to Siri as I went along, there were still some amusing misunderstandings between us. The best one was when I said, “Hey Siri, play some polka music,” hoping to hear some Lawrence Welk, and Siri brought up a poker podcast instead. Swing and a miss.

All of the voice commands that you can use with the Apple Music Voice Plan may sound very familiar if you use AirPods or have a HomePod. It’s somewhat similar to Amazon’s Single Device plan ($3.99/month) that lets you can basically ask Alexa the same musical questions that you ask Siri, though that’s tied to a single Echo. Spotify also launched its own “Hey Spotify” feature earlier this year, but that’s more of a companion than a service. Apple is trying something unique with the Apple Music Voice Plan that might work for some people, provided Siri gets better at understanding what you want to hear.

But $4.99 a month is a nice price for the fun and listening potential that you can have with the Apple Music Voice Plan, and a decent option to consider if $10 is too much to add to your monthly streaming allotment. As a professional DJ and writer who loves to record her own continuously mixed sets as opposed to making or listening to unmixed playlists, I’m not really the target customer for a service like this, but the price and convenience is tempting—as long as Siri gets a lot better.