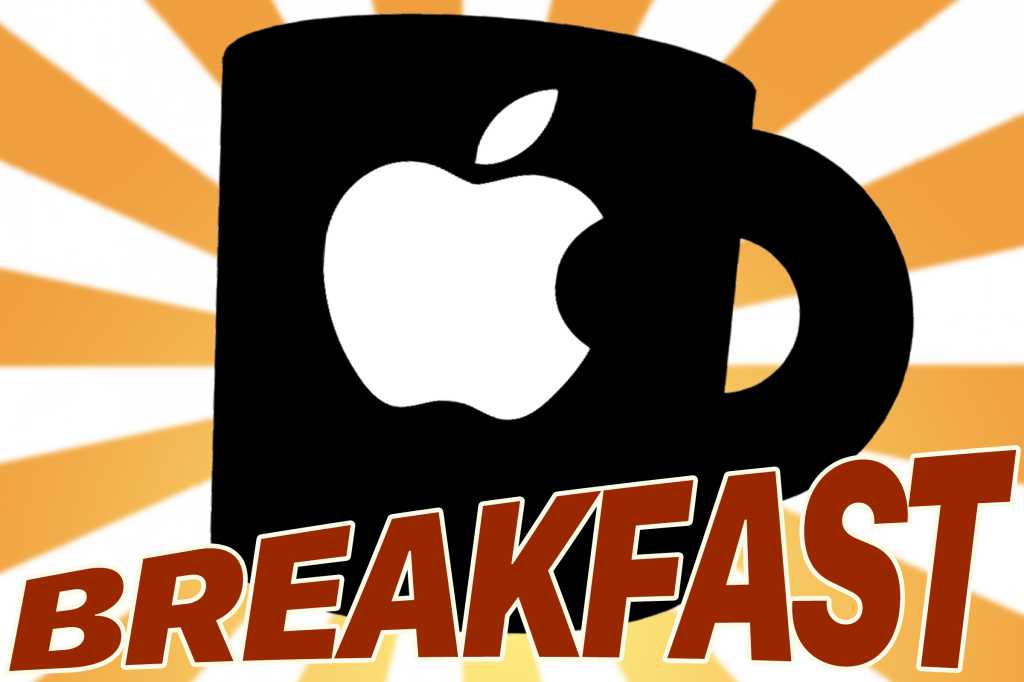 Welcome to the new home for Apple Breakfast! If you’re a reader of Macworld’s UK site, you’ll recognize this column that will now appear on Macworld.com every Saturday. If you’re new, this to our weekly collection of all the Apple news you missed this week, in a handy bite-sized roundup. We call it Apple Breakfast because we think it goes great with a weekend cup of coffee or tea, but feel free to check it out during lunch or dinner hours too.

The trend is nigh: Predictions for 2022

While 2021 was a strange and difficult year for many of us, the world’s favorite fruit-themed technology company seems to be doing okay. Sure, it had a few setbacks – concessions to app developers, allegations of employee mistreatment, and a climbdown in its war against the right to repair – but the hits keep coming and the tills keep ringing. Indeed the Macalope reckons it was a year of miracles, all told.

With the company standing at a crossroads – facing a battle for its soul, as we’ve discussed in a previous Apple Breakfast–it’s fascinating to speculate about the direction it will take from here on out. And Macworld writers have taken up the challenge of exploring Apple’s likely trends in 2022.

Dan Moren kicks things off by looking ahead to a year of untrammeled possibility and simmering excitement, from mixed reality to smart home tech.

Jason Snell reckons that 2022 could be the Mac’s best year ever. He also explains why the iPhone won’t take center stage in 2022, with attention focusing on Apple’s brand-new categories. iOS 16, on the other hand, will be a big surprise, writes Simon Lohmann.

David Price outlines the new Apple products we can expect to launch in January 2022 (including the depressing but distinct possibility that the company won’t launch anything until the spring). Not to be outdone, Karen Haslam lines up every new product rumored for the entire year.

André Martin reports that 2022 will go down in history as the year in which Apple completes the switch to Apple silicon, and predicts that high-end Macs are coming. While Thomas Armbrüster reckons macOS is in for a mammoth update this year.

In 2021 Apple confounded the leakers with a smartwatch launch full of surprises. Halyna Kubiv wonders if the Apple Watch Series 8 will prove to be a tick or a tock, and runs down the changes and new features we can expect from the Apple Watch this year.

Stephan Wiesend, meanwhile, goes deep on Apple’s plans for the iPad family–it’s no longer the wallflower in the Apple cosmos, to mix our metaphors slightly–then gazes into a future in which iPadOS meets macOS in the middle.

It should be a fascinating year. But whatever Apple comes up with in 2022, you can guarantee that Macworld will be right there with you to explain what’s going down.

Wondering how Zoom, Chrome, and Notes would have looked in 1999? Relive Apple’s golden years with this delightful Monterey-Mac OS 9 mashup.

Got a new Mac, or just want to get more out of the one you’ve got? Here are 10 simple tweaks that will make your Mac safer and smarter.

While we’re at it, here are 10 iPhone settings you need to change, and why.

Glenn Fleishman reviews PCalc for the Mac, and discovers a simple adding app with a treasure trove of features.

When Apple the brand loses, Apple the company still wins, observes the Macalope.

And in case you missed it on Christmas Eve, here’s another chance to read Martyn Casserly’s masterly Apple-themed take on A Christmas Carol.

In a troubling turn of events for one of the premier password managers on the net, multiple LastPass users reported phantom login attempts from foreign countries. LastPass has investigated what it believes to be “attempted ‘credential stuffing’ activity” and says it “will continue to take steps designed to ensure that LastPass, its users, and their data remain protected and secure”. The company also said some of the logon messages were sent in error and assures users that no passwords were compromised.

DuckDuckGo is building a privacy-first desktop browser for macOS.

The iPhone’s SIM card may be the next legacy feature to bite the dust, as we move one step closer to a completely sealed iPhone. But there is reason to believe that the iPhone 14’s camera will still suck at zooming.

Apple is plotting an 18-month Mac upgrade cycle, with the M2 chip launching in mid-2022. The company is also reportedly working on cheaper displays for 2022.

And with that, we’re done for this week. See you next Saturday, enjoy your weekend, and stay Appley!