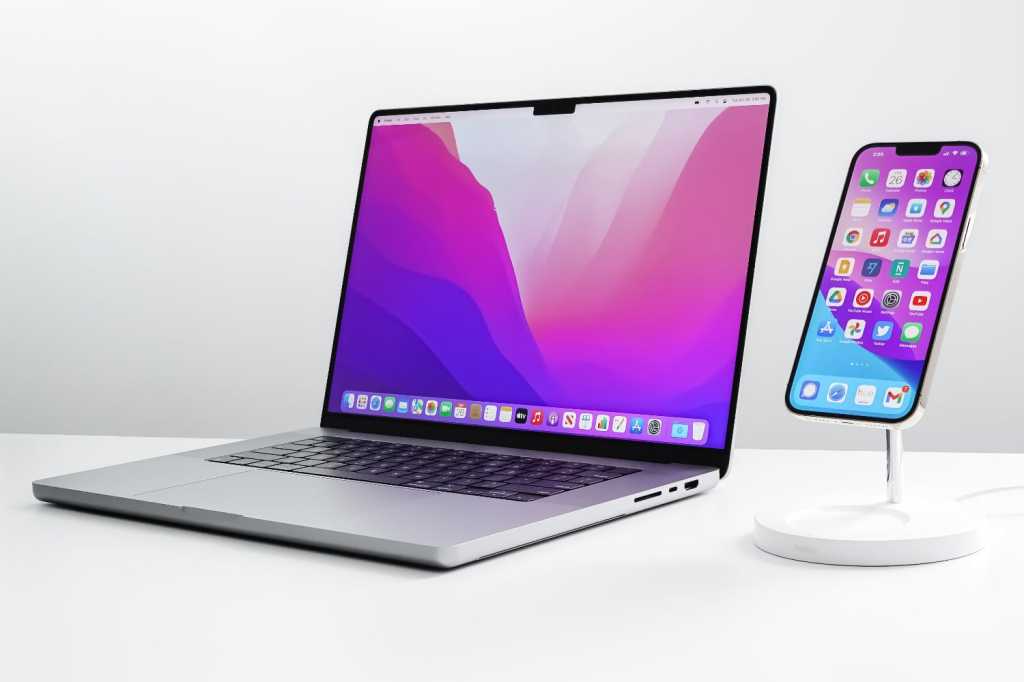 2022 promises to be another big year for the Mac, with the second half of the Apple silicon transition bringing a new 27-inch iMac, Mac Pro, and a redesigned MacBook Air. But while we’re excited about the performance gains and new designs, the conclusion of the switch to its own chips is also an opportunity to create some further feature parity between the Mac and our iOS devices.

As much as we love our Macs, the iPhone has become our primary device throughout the day. So we’ve gotten used to the convenience the iPhone brings and find ourselves longing for many of its features when we turn to our Macs. Here’s are the ones we’d like to see come to the Mac after the Apple silicon transition is finished.

It’s odd how Apple has never offered cellular connectivity with any of its MacBooks. We thought that would change with the 14- and 16-inch MacBook Pro—Apple promotes these laptops as true “pro” machines and we hoped that finally included 5G. But that didn’t happen. The only wireless connectivity offered in any MacBook is Wi-Fi and Bluetooth, and while it’s relatively easy to find a publicly-accessible Wi-Fi connection or tether our iPhones, it’s usually much slower and not as convenient as built-in cellular networking.

However, if a 5G MacBook is going to happen, 2023 seems more likely. Apple bought Intel’s modem business over two years ago, and right before the Intel deal, Apple settled a lawsuit with modem manufacturer Qualcomm that involved a six-year licensing agreement. Analysts estimate that an Apple wireless chip could appear in 2023—the details of the licensing agreement aren’t publically known, but it’s likely it has nothing to do with the Mac, which would allow Apple to debut its new wireless chips in a MacBook.

The 14- and 16-inch MacBook Pro and the 24-inch iMac came with improved 1080p FaceTime cameras. We’ll admit that they’re a vast improvement over the 720p FaceTime cameras that Apple used for far too long, but they’re also a far cry from what the camera on the Mac should be. Apple could do even better by using the iPhone’s TrueDepth camera, which pairs a 12 MP, f/2.2, 23mm wide camera with a 3D structured light depth/biometrics sensor.

Apple doesn’t even need to put it in all of its Macs, just the pro models. As we wrote in our 14-inch MacBook Pro review, “putting the 12MP FaceTime camera on the MacBook Pro would give pro users a top-notch video-conferencing experience.” Rumor has it that Apple is gearing up to launch a larger iMac with an M1 Pro to revive iMac Pro this year, and we hope it’s the first Mac that will be outfitted with the 12MP FaceTime camera. Speaking of…

Okay, this isn’t technically an iPhone feature, but it feels like one. One of the best new features in iPadOS 15 is Center Stage, which adjusts the tablet’s front-facing camera to keep you in the frame during a videoconference. It can zoom in when there’s just one person on camera, or zoom out when there are multiple people. If you move, Center Stage adjusts so you’re still in the center of the frame.

It’s a fantastic feature and it needs to be on the Mac, which is frequently used for videoconferences. As Jason Snell pointed out in a recent More Color column for Macworld, Center Stage “is perfect for any device that generally stays still while people position themselves around its front-facing camera.” It’s an ideal feature for the iMac, and it would work great on the MacBook, too.

Hey look, another feature involving the front-facing camera! With the release of the 24-inch iMac and the Magic Keyboard with Touch ID, fingerprint authentication has become ubiquitous on the Mac. It’s a convenient feature—it’s a lot easier to scan your finger than enter a complicated password—and much more secure, but Face ID takes it one step further.

Imagine that the task you’re doing requires authentication, and the Mac performs a Face ID check so quickly you barely even notice it. That would be cool. Apple could even keep Touch ID around, so a user can set a preference for either method and have a surefire way to pay for things. Like the TrueDepth camera above, Apple could limit Face ID to pro Macs to help differentiate those models from consumer Macs.

With an iMac Pro almost certainly coming out this year, it’s an opportunity to surprise the community with the first touchscreen Mac. Since the iMac Pro will have a screen bigger than 24 inches, UI elements will also be bigger and be more conducive to touch. Maybe Apple introduces it as a way to promote iPhone and iPad apps running on Apple silicon Macs. App developers tend to use pro Macs, so the touchscreen UI could be introduced in the iMac Pro and eventually be brought over to the 14- and 16-inch MacBook Pro.

We’ll admit it’s probably not going to happen. We’ve been saying for years that touchscreen Macs are an opportunity for Apple, but the company has been adamant that the technology isn’t in the Mac’s plans. Apple has flipped on similar declarations in the past—technology and user demands are constantly changing, and Apple is willing to change, too. We haven’t heard so much as a peep about touchscreen development, so if this did happen in 2022 (if at all), it might be Apple’s best ever kept secret.