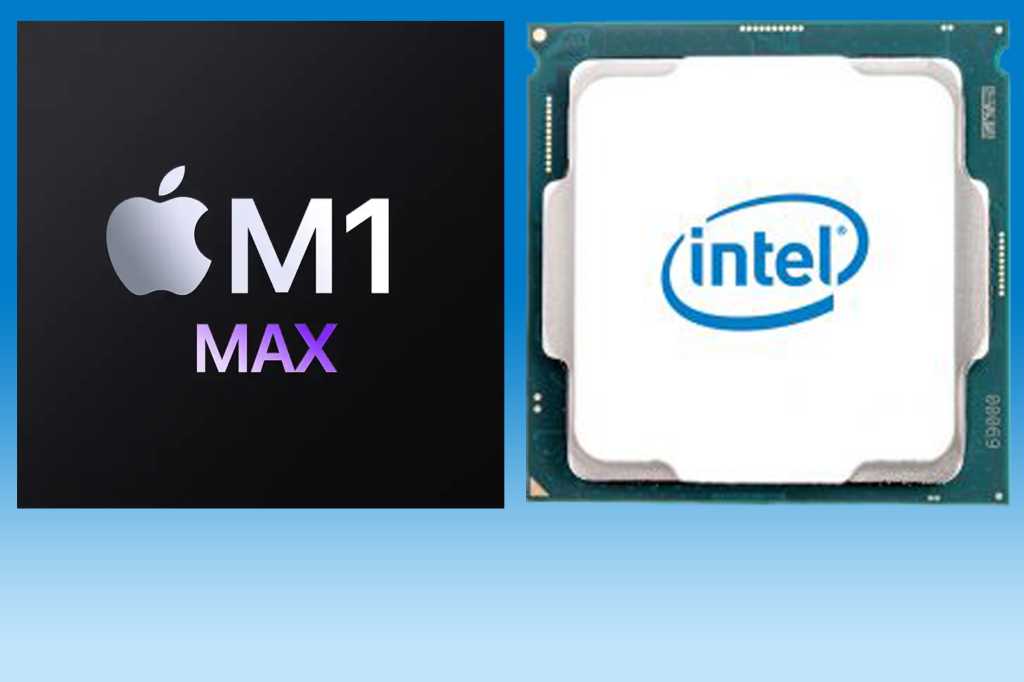 Intel’s Alder Lake processor is starting to become available in PC laptops and that means one thing: benchmarks! Macworld’s sister publication, PCWorld, posted a review of one of the first laptops with the Core i9-12900HK processor (code-named Alder Lake), and it inevitably got us thinking about Apple’s M1 Pro and Max.

To be clear, PCWorld didn’t include Apple silicon in its review—they are reviewing Windows-based laptops and comparing Alder Lake to its predecessor and a new 8-core Ryzen 9 5900HX CPU. Many of the benchmark programs PCWorld used aren’t even available on the Mac or do not have native M1 versions, but PCWorld did run Geekbench and Cinebench, two benchmarks Macworld also uses. And we learned a lot from them.

First, let’s check out the specifications for the laptops:

Geekbench is a general, overall usage benchmark that we use to test all of Apple’s chips in Macs and iPhones. In Geekbench 5’s multi-core CPU test, the Alder Lake Core i9 has a 5 percent lead over Apple’s processor. In the single-core test, Alder Lake’s improvement was 3.5 percent. That’s basically a draw. Alder Lake has a slight edge, but it many cases, you won’t even notice a difference.

Geekbench 5’s OpenCL graphics benchmark results look dramatic. The PC laptops PCWorld tested have expensive discrete GPUs that offer peak performance, and it shows in the results. But a more applicable comparison is to examine the results for the integrated GPUs. In this case, the M1 Max and its 32-core GPU posts a 183 percent increase over the Alder Lake’s integrated GPU, an Iris Xe.

Another popular benchmark is Cinebench R23, which performs 3D modeling and is a multi-threaded test, so the more cores a CPU has, the better. It also puts constant stress on the CPU and is not intended to gauge performance bursts. In this test, we don’t have numbers for the M1 Max; our results come from an M1 Pro in our review of the 14-inch MacBook Pro. Here, Alder’s Lake’s advantage is more apparent, posting a result that’s a 29 percent improvement over the M1 Pro.

What about power efficiency?

PCWorld ran a couple of tests to gauge the power draw of the Alder Lake-equipped laptop. During the Cinebench R23 multi-core test, the Alder Lake laptop was consistently in the 100-watt range, with spikes between 130 and 140 watts. We haven’t tested the power draw of the M1 Pro/Max ourselves, but AnandTech used Cinebench R23 and found that the M1 Max’s power draw was 39.7 watts versus over 100 for the 11th-gen MSI GE76 Raider. That’s a lot less than Alder Lake.

In PCWorld’s testing, the MSI GE76 Raider got 6 hours of offline video playback, a far cry from the MacBook Pro’s 17 hours. That’s a huge difference, especially on a laptop. Granted, the MSI GE76 Raider won’t venture too far from a power outlet and has completely different demands than the MacBook Pro, but Apple has managed to deliver speeds that are nearly as impressive as Intel’s best without sacrificing efficiency.

A win for Intel with an asterisk

PC fans will surely take these first round of results and use them to gloat and that’s fine. But Intel’s win here is full of caveats. For one, there are power consumption concerns and battery life. For another, the laptop tested costs $3,999 and represents the absolute top-of-the-line Intel has to offer in a laptop. Apple’s 14-inch M1 Pro MacBook Pro costs half as much and performs nearly as well.

In the end, though, comparing Alder Lake and the M1 ends up being a simple academic exercise that doesn’t amount to much. Rumors have popped up stating that Apple could continue to offer Intel processors in a Mac Pro to accommodate those power users who rely on Intel-native software, so there’s some relevance there. But otherwise, Apple’s Mac lineup is going to be completely M-based by the end of this year, so who cares how Intel processors do? If anything, the results reaffirm that Apple silicon on the Mac is the way to go—even for PC users, though PCWorld sees things a little differently.

Update 1/31: PCWorld has posted its own analysis of the benchmarks with some additional insight into the numbers.