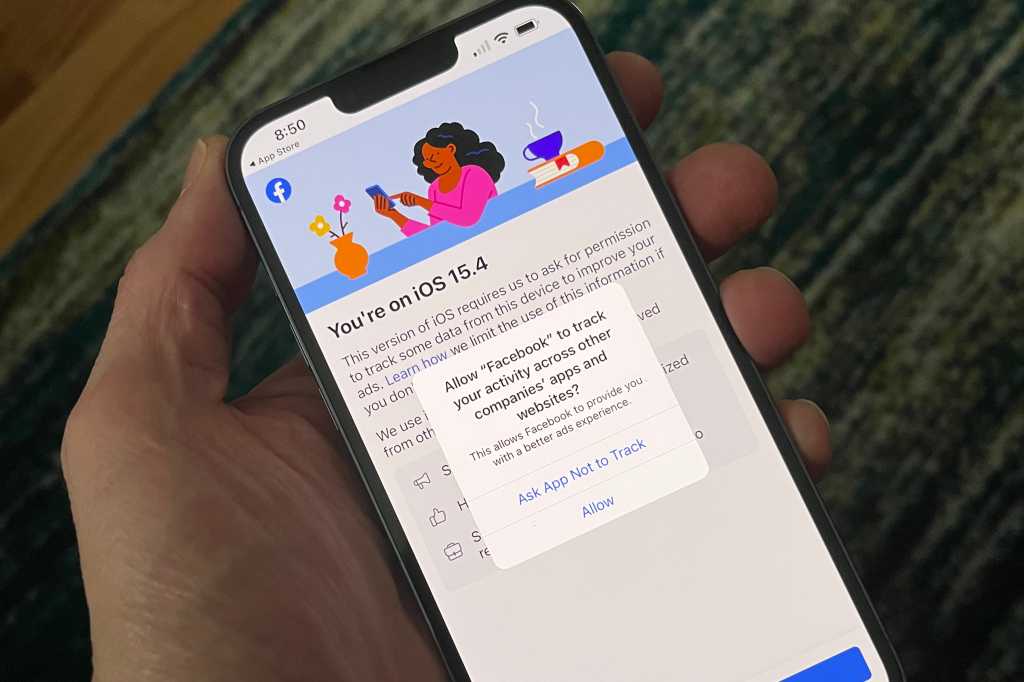 Facebook/Meta announced its fourth-quarter earnings on Wednesday and it was quite a different mood than Apple’s last week. Facebook missed expectations with lower revenue and a dismal outlook that sent the stock plummeting some 25 percent. And it’s all Apple’s fault.

It all stems from the App Tracking Transparency feature that Apple implemented in iOS 14.5 last April. It’s a simple dialogue box that pops up when you launch an app for the first time. Before you start using the app, you’ll get an alert that asks if you want to allow it to track your activity across other companies’ apps and websites.

Tap Allow and things will continue as they have since you’ve owned your phone. But select Ask App Not to Track and the app will be barred from tracking your activity once you leave it.

It might seem like a small thing, but tracking is big business for a company like Facebook that relies on ads. According to Meta CFO Dave Wehner, “the impact of iOS overall is a headwind on our business in 2022 … on the order of $10 billion.” The stock hit when the markets opened Thursday initially wiped out $200 billion of Facebook’s value.

Facebook complained that Apple’s app tracking transparency favors companies like Google because ATT “carves out browsers from the tracking prompts Apple requires for apps.” Wehner even went so far as to accuse Apple of ignoring the “policy discrepancy” because “Apple continues to take billions of dollars a year from Google Search ads.”

Apple built strong anti-tracking protections into Safari long before ATT was implemented, and Google has insisted that it doesn’t sell personal information with several ways to turn off tracking within Chrome and search. Additionally, Google has created its own version of ATT as part of its Android operating system as well as a new cookie-free advertising system in Chrome called Topics that involves short-term, hand-curated data analysis that “represent your top interests for that week based on your browsing history.”

But it’s hard not to see how ATT affects Facebook above all others. Despite an ad campaign fighting it and a page that explains how allowing ad tracking will “support businesses that rely on ads to reach their customers,” a disproportionate number of iPhone users have opted to turn off tracking. And now it’s starting to seriously affect the bottom line.