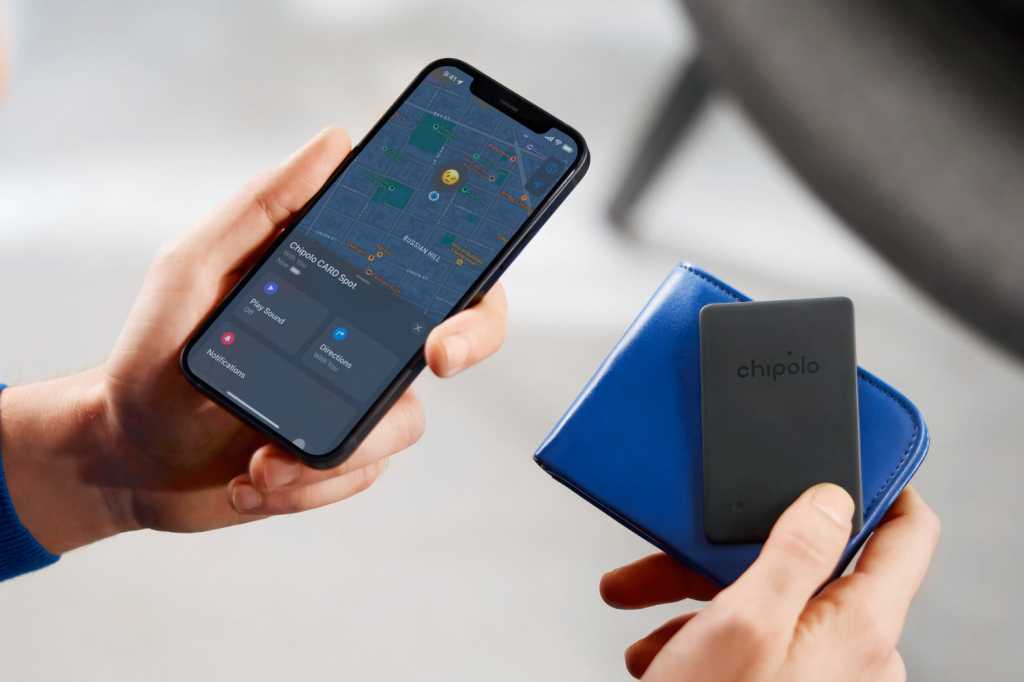 Chipolo
At a glance

As Apple’s Find My network matures, third-party licensees have found more product niches to fill. The Chipolo Card Spot is a new version of the company’s existing thin, wallet-sized tracking item, with this one designed to work on Apple’s network.

The Chipolo One Spot, a direct competitor to the AirTag, is already thinner and less obtrusive than Apple’s offering. The Card Spot goes a step further, offering a rigid case that’s just thick enough to hold a variety of compact electronics, an embedded speaker, and the battery to power them for up to two years. An owner can’t swap out its battery, but Chipolo has a plan for that.

Its height and width are the same as a credit card: 3.35 inches wide and 2.11 inches tall (85.1 by 53.6mm). At 0.096 inches (2.4mm), it’s three times as thick as a standard credit card (about 0.3 inches/7.5mm). Hardly a wallet bulger, except if you carry a very thin wallet. It fit my standard-sized wallet and will fit in credit-card plastic cardholders in a pocketbook or other holder, or in a slot in a billfold or case.

Perhaps due to dimensions or power, the Card Spot produces about 10 percent lower maximum volume than the One Spot: the Card Spot operates in the range of 105 decibels (dB), but it should still be loud enough to identify. I measured 80 dB just a few inches from the Card Spot inside my crowded wallet.

Because wallets can get dropped in unfortunate places, the Card Spot has an IPX5 rating, which requires resistance to water incursion from splashes or low-power streams of water. However, it’s not designed to survive immersion. It might not get soaked inside a wallet before it’s plucked from a toilet or puddle.

Chipolo benefits from piggybacking on Apple’s Find My network—it just meets Apple’s standards, and the ecosystem of Apple devices that rely on Find My items’ low-power, encrypted Bluetooth identifiers does the rest. Apple opts anyone with a Mac, iPhone, or iPad into the network, which provides security and privacy for the owner of the device broadcasting its identifier.

Once paired, the One Spot appears in the Items view in the native Find My app in iOS, iPadOS, and macOS. Because of the device-based encryption used with the Find My network, you can’t use the Find My iPhone web app at iCloud.com for the Card Spot (or any Find My item).

The Chipolo has one feature an AirTag doesn’t while lacking two an AirTag possesses. The Card Spot, like the One Spot, has an internal button marked by a small dimple that can be triggered by squeezing. This makes it discoverable to the iOS/iPadOS Find My app for pairing. (In Find My, tap the + sign in the main view at the bottom, tap Add Other Item, squeeze the CARD Spot, and follow the steps to name it and assign an emoji.)

Unfortunately, no third-party Find My item contains either ultrawideband (UWB) for precision finding or NFC (near-field communication) for tap- or proximity-based data transfer and activation. The Apple AirTag features both. UWB can provide directions to an item when it’s within a few dozen feet down; NFC allows an AirTag to be tapped on an iPhone, Android device, or other hardware with NFC reader to pull up a link to its unique serial-number-based information page.

It’s unknown whether Apple doesn’t allow that in third-party items or whether it’s unaffordable for companies who aren’t Apple to incorporate two or three radios in one compact device. I note the absence of these two radios in this review’s “cons” list, but I can’t mark the Chipolo device’s rating down for absent features that are also missing from all third-party options.

With a Card Spot, someone finding it has to launch Find My on an iPhone or iPad, tap the Items icon, tap Identify Found Item, and then select the Card Spot when it appears. Find My prompts the finder on retrieving more information or disabling the item. Because of its placement in a wallet, it’s far more likely that you would use the Card Spot to find your lost wallet rather than someone finding your wallet, dig through it, and discover the tracker.

Apple requires Find My network licensees to follow the same rules as Apple applies to its AirTag trackers. These rules are designed to deter unwanted tracking using Find My items by stalkers, people hired to follow someone or other undisclosed purposes. For instance, when a Card Spot is not within Bluetooth range of its paired iPhone for more than eight hours, it will begin playing its loud built-in finding sound at a random interval in the following 16 hours.

Any Find My item also triggers an alert on an iPhone or iPad if the item is separated from its paired device and appears to be traveling with someone. An Android app, Tracker Detect, lets owners of those devices detect a Find My item nearby; Apple tested adding this feature into the iOS/iPadOS Find My app, but it’s unclear when and if it will appear—possibly in version 15.4. Apple also plans to refine anti-tracking measures further in upcoming changes to its network and operating systems.

Unlike the One Spot and all other Find My items currently on the market from Apple and other parties, you cannot swap out the battery in the Card Spot. It’s a tradeoff for its size. However, Chipolo promises a discounted swap out. Register your purchase, and in two years, you will receive an email with a 50 percent off coupon on a replacement. Place the order and receive the fresh Card Spot and a postage-paid mailer to return your original, which the company will shepherd into electronics recycling.

If you’ve ever lost your wallet or frequently find it’s not where you expected it to be, you know that $35 is a small price to pay for peace of mind and rediscovery. The Card Spot is impeccably designed to fulfill its format.