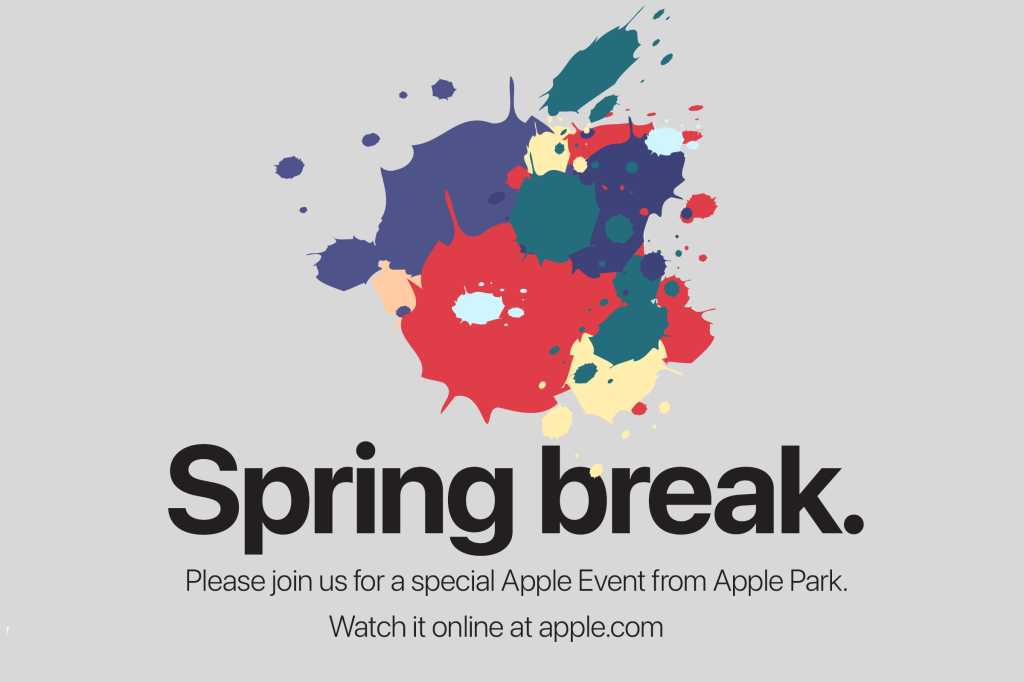 Apple loves a good event tagline: something that’ll tease the imagination without giving away what’s going to be announced. Last year clue-hunters did their best to parse usable information from the slogans Unleashed (in October), California Streaming (in September) and Spring Loaded (back in April). The latter is the second spring pun the company has used in recent years, after the daylight savings-themed Spring Forward in 2015.

This year’s spring event is predicted to take place on Tuesday, March 8; if that theory is correct, the invitations should drop this week and possibly this very afternoon. But what tagline will be used to decorate those invites that will clutter your Twitter timeline? We’ve got some ideas, and are sure you’ll agree that any of the options listed below would be excellent choices. Here are six taglines that Apple should be giving careful consideration (and six that they should leave on the cutting room floor).

Hey everyone! School’s out! It’s time to slurp jello vodka shots and talk about budget smartphones! (Full disclosure: I am British, and my understanding of what spring break involves is a little shaky.)

More seriously, Apple looks set to “break” from tradition by launching an even cheaper iPhone SE (it could start as low as $299, with the existing model offered for just $199, in an unprecedented concession to budget buyers). The 27-inch iMac, meanwhile, is set to break away from the 24-inch model with a chinless design and $4,999 price tag. The event is a break from the humdrum of everyday life, too, or at least that’s what Apple will want us to think.

Now we’re talking! This tagline evokes the longed-for heat of summer while most of us (apologies for northern hemisphere bias) are still stuck in the final throes of winter, and hints at excitement and hype. Best of all, it’s super vague: like Spring Loaded, it feels like it might contain a clue to the precise announcement, but really just refers to the buzz of a big Apple event.

A similar combination of excitement and vagueness which is even more redolent of cheering crowds, sweat and drama. A poignant thought in an area of virtual events. The only problem is that I think it might be copyrighted by a basketball organisation (quick reminder that I am British), which might cause legal difficulties. March Hare, which has similar associations with madness but less positivity, will not be among our recommendations.

A little like Spring Forward, this is a phrase with positive vibes only and invoking the app that runs the iPhone home screen. What does it mean in this context? Who knows, but just watch the pundits twist themselves into knots trying to work it out.

Apple’s admiration for the fashion industry is well-documented, and this elegant tagline would neatly introduce the latest beautiful objects from Cupertino’s couturiers. Plus we’re supposedly getting new iPhone cases so it tracks.

Let’s not be literal here–Apple doesn’t need to unveil a range of HomeKit-compatible smart vacuum cleaners to justify this tagline. That’s the sort of interpretation that will set rumor blogs buzzing with anticipation, but announcements rarely match taglines so directly. It would work just as well for an event that “cleans up” a market that Apple has previously left to the amateurs (such as AR headsets or foldables), or “cleans out” the cupboard of unreleased products at Cupertino.

Food puns probably aren’t the way to go. Especially ones with connotations of cowardice or no longer being in the first flush of youth. While we’re on this subject, we’ll also give Spring Roll and Spring Onion a miss. (Editor’s note: Spring Roll is actually not bad.)

I mean… watches do have springs, and Apple sells watches without springs, and maybe it wants to tell us about a new model of Apple Watch SE or Sport at a separate event from the Series 8 (expected in the fall), and it will be inviting us to ‘watch’ the event. But this is not very mysterious.

Yes, it could work as yet another Apple Watch reference. But there are two problems. The first is that it isn’t really a pun or an unusual use of the phrase: it’s just literally what season we’re in. (Or nearly in.) And Apple isn’t actually releasing a watch at this event.

Not terribly thrilling. The problem with march puns in general is that marches tend to be either pompous, slow, funereal, militaristic or wedding-themed. None of which are what we’re looking for. On similar grounds, then, we will also reject Quick March, Death March, Funeral March and Imperial March (Darth Vader’s Theme).

In most years, this tagline would be good enough for Apple to grab with both hands. But in the third year of a pandemic? No thank you.

Look, I’m not even sure where I was going with this one. But to be fair, California Streaming didn’t make a ton of sense either.