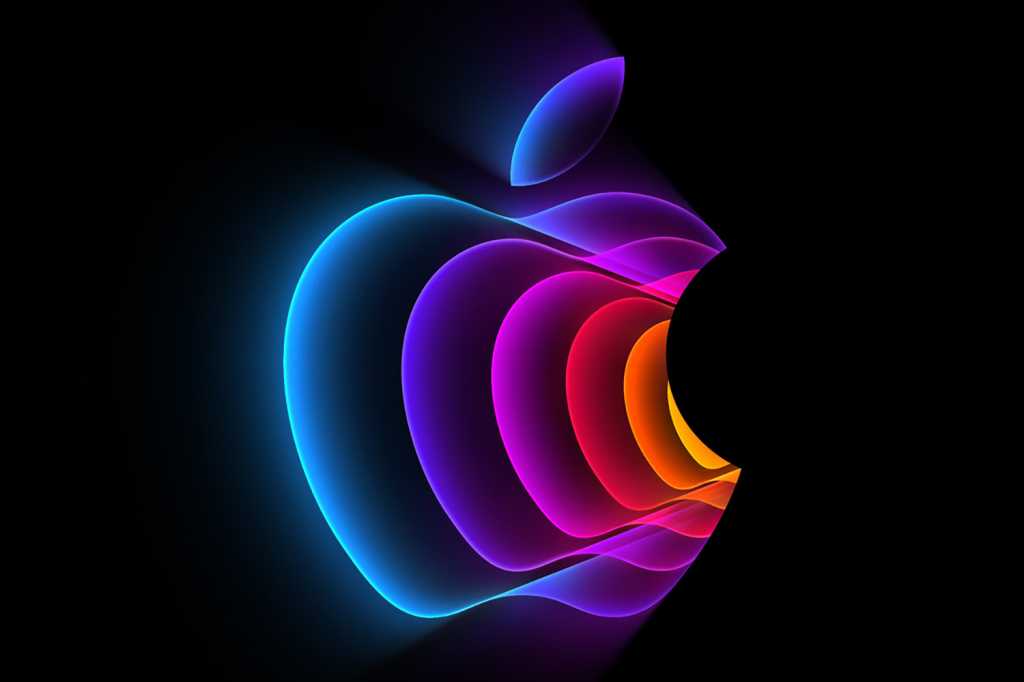 As you have probably heard by now, Apple is holding its first special event of the year on March 8. As is tradition, Apple sent out invitations to the press with a single image and a short tagline—this time, it was the Apple logo in multiple colors in an “infinity mirror” receding style and the tagline “Peek Performance.”

Apple’s event invitations often (but not always!) contain little hints about what the company intends to reveal. The last event featured the Apple logo in a “warp speed” sort of starfield effect and the tagline “Unleashed.” In hindsight, it was an obvious reference to the introduction of Macs with the M1 Pro and M1 Max chips, the fastest Apple has ever produced. In the spring of 2019, the invitation showed the Apple logo on a darkened stage with the tagline “It’s Show Time,” and the focus of the event was on the launch of Apple TV+ (along with several other services). “Hi, Speed” brought the 5G iPhone 12 and, well, you get the idea.

The third-generation iPhone SE is almost certainly going to be announced. With the A15 processor and 5G capability, it’ll be the fastest iPhone SE ever (naturally) and an extremely zippy iPhone for the price (expected to start at $399 and possibly lower). Apple will also update the iPad Air to the A15 processor with 5G in the cellular models.

That’s not really a new high-performance bar, but it’s taking the “peak” of Apple’s performance and applying it to more affordable products. It’s a little boring, but it’s safe.

The exciting option: M2 and a redesigned MacBook Air

A new iPhone SE and iPad Air, no matter how nice, don’t seem like a “performance” play. A new MacBook Air with an M2 processor, that’s a big deal!

We predict that the M2 will be quite a lot faster than the M1 (though not quite on par with the bigger, pricier M1 Pro and M1 Max). The new MacBook Air is rumored to have a new design with thin bezels, flat edges, more ports, and MagSafe. And it’s rumored to come in colors like the 24-inch iMac…just like that Apple logo in the invitation!

“Peek” is obviously a play on “peak” since this is a look at products that may not ship for a few weeks, and an all-new MacBook Air with much faster performance, longer battery life, and a new design definitely hits the “peak performance” angle. Another rumor said that Apple will continue to sell the older 13-inch MacBook Pro, the one with the larger bezels and the M1 processor, only with the M1 replaced by the M2. We don’t think that’s a great idea (with the 14-inch model out there, we don’t really need a 13-inch model anymore) but if that’s the way Apple is going, it could appear at this event, too. The M1 Mac mini could get the same treatment.

Unlikely but possible: The 27-inch iMac and new Mac mini

What we really want to see is the new larger iMac, the one slated to replace the current Intel-based 27-inch model. Nobody’s sure if it will be called the iMac Pro or not, but it’s likely to have the M1 Pro/Max processor and an HDR display with mini-LED backlighting. It’s expected to follow the design changes of the new 24-inch iMac, although perhaps with bolder colors (or maybe just silver and space grey).

We’ve heard a new high-end Mac mini is on the way for quite some time now. It’s supposed to be fully redesigned, similar in shape but more colorful with a power plug similar to that on the 24-inch iMac and more ports than you’ll find on the current M1-based model. Oh, and it should come in colors, too.

New products that use Apple’s fastest-ever processors, the M1 Pro and M1 Max, certainly sound like a “peak performance” situation. Neither product is rumored to hit the market until at least WWDC this summer, but we’ve been surprised by an Apple event before!

Not a chance: Apple Glass

“Peek” is obviously in reference to something visual! And that infinite-mirror effect on the Apple logo…it can only mean one thing:

That’s right, along with a bunch of pedestrian processor upgrades in other products, Apple is going to show off its AR glasses. Or a VR headset, or whatever it’s bringing to market first. It won’t come with any pricing or release date other than “late 2022” but it’ll wow everyone with a demo that is miles beyond any of the augmented reality stuff we’ve seen so far.

Or not. There’s really no chance that this is going to happen. When Apple enters the market with AR glasses, even if it’s just for a pricey developer-focused model, it’s going to do it at a bigger event, hopefully with in-person attendance. But we can dream.