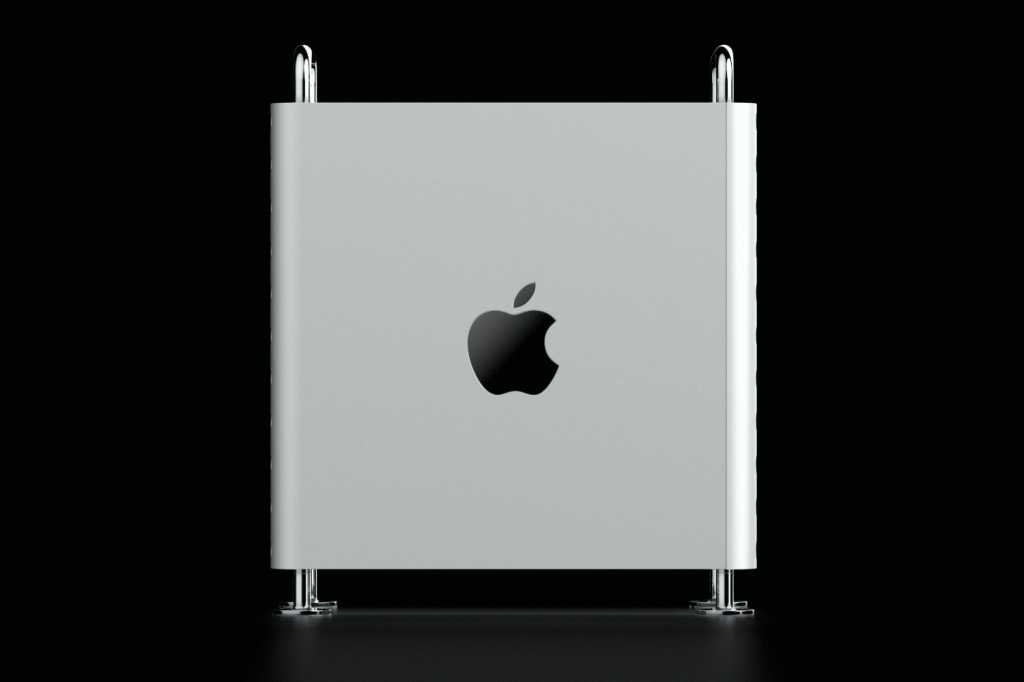 Users of the current Mac Pro (which was introduced in 2019 and received only minor refreshes since) would likely say they’re mostly happy with Apple’s workstation. There may be qualms about the higher overall prices and the dated Intel Xeons processors, but Apple has released MPX Module upgrades that keep video and 3-D folks happy, and pros can swap PCI-E cards in and out to their heart’s content. You can even throw in an off-the-shelf AMD Radeon GPU in there, too.

A new Mac Pro is coming, though, sporting Apple silicon that promises to impress. Apple says the M1 Ultra Mac Studio is faster than a 28-core Xeon and the W6900x MPX GPU by a fairly wide margin, and the M1 Max MacBook Pro already beats a loaded 2019 Mac Pro in ProRes tasks. In terms of processing power, the future looks bright for the Mac Pro.

However, Apple refers to the Mac Studio as “modular” but that’s only in regard to it being separate from a display. It’s not modular in the way most pro users want—upgradeable components such as RAM or the CPU, PCI-E expansion slots, and more. The Mac Studio lacks any of this and relies on external Thunderbolt or USB options for expandability. After numerous Apple silicon Macs that offer no after-market upgradability, it would seem to be a sign of where Apple is going with the Mac Pro.

But in actuality, Apple now has an opening to introduce a Mac Pro that truly differentiates itself from the Mac Studio. To address the needs of pros, a Mac Pro has to be truly modular. But is Apple willing to do that?

“Modularity” (in the traditional sense of the word, not Apple’s) is just another word for “upgradability.” To illustrate how important it is to pro users, here is my personal list of upgrades I’ve done to my 2019 Mac Pro.

That’s quite a significant list, and it was done over time as my budget allowed, instead of shelling out the big bucks when I bought it. Cost savings for DIY is one of the other perks that business-minded pros have come to enjoy from modular workstations. And if a user is developing new skills to take on more complicated tasks, the computer can be easily upgraded, instead of investing in a whole new machine.

As the M1 Ultra and M1 Max are designed, everything is packed very tightly onto the chips, leaving no room for user upgrades. The Mac Pro would have to be different to introduce modularity and true user upgradability back into the fray. What upgrades could theoretically be replaced without discomfort? Right off the bat, the Afterburner card can go. Apple silicon has built-in decoders/encoders that can beat it now.

If the GPU is powerful enough in the new Mac Pro—and we have no reason to think it won’t be—it can also replace the current MPX Modules for most pros. Future upgrades will still be an issue, of course, but there’s always Thunderbolt.

PCI-E slots are essential in the PC world, and they’re just as important for pro Mac users. Need a video capture card or an audio card? You can pop that into the current 2019 Mac Pro. Want to avoid paying for a high-capacity NVMe drive from Apple? You can buy NVMe adapter cards that let you add as much storage as you’d like. These slots are irreplaceable for pros who make use of them, no matter how powerful the next Mac Pro is.

What would a non-modular Mac Pro look like? Messy—from the cables and dongles used to connect Thunderbolt accessories. It’s certainly not ideal, as it’s been tried before with the 2103 Mac Pro, and pro users did not like using the Thunderbolt ecosystem as much as Apple hoped. We don’t know what support for add-on cards would even look like with Apple silicon, and it’s entirely possible that this piece of modularity will be gone forever.

But Apple could surprise us with the Mac Pro. That tease at the end of the “Peek Performance” event implies that Apple has something different in store for the Mac Pro. It could be a dual-processor M1 Ultra machine, but that would just be a faster Mac Studio, not a Mac Pro. If Apple were to offer an Apple silicon-based Mac Pro with PCI-E slots, support would likely be purposefully limited, but Apple could still keep pros happy without compromising

Graphics cards have been essential upgrades for video and 3-D pros over time. The ability to add MPX Modules or off-the-shelf AMD Radeon GPUs is a huge boon to pro users. Would a non-modular Mac Pro work? If Apple can once again surprise us with staggering GPU performance, it just may.

Two W6800x Duo GPUs outperform existing Apple silicon in GPU tasks such as R3D Raw and 3-D work (see the benchmarks below). If the new Mac Pro can approach this level of performance, the need for modularity certainly decreases.

The new M1 Ultra, with its 128GB of RAM and 64-core GPU, gives us an idea of what Apple could do with the Mac Pro’s graphics. According to Apple, the Ultra is significantly faster than the W6900x MPX module in the existing Mac Pro, which is the fastest single option you can get. It’s likely that an updated Mac Pro will be even more powerful, perhaps equaling or beating the current Mac Pro’s multiple GPU options. If Apple can achieve this, the company may think that there would no longer be a need for MPX Modules for graphics-heavy tasks.

However, a Mac Pro that relies solely upon the Apple silicon GPU creates a problem: you’re locked into the configuration with no upgrade path. Currently, if you buy a Mac Pro with an AMD 580x, you could install the most powerful MPX options at any time. A new Mac Pro without the ability to upgrade may be impressive upon launch, but as it gets a few years old or your demands increase, it will be quickly outdated. (You’ll have to buy a new one!)

Thunderbolt 3 external GPUs (eGPUs) are not possible with Apple silicon at the moment. It’s unlikely Apple is interested in eGPUs, since they’d likely want to keep with in-house GPU solutions. Also, they’re not as fast as a PCI-E-connected GPU. With what we’ve already seen from Apple silicon and what is likely to come, it’s likely that the GPU you buy with your Mac Pro is the GPU you’re going to be stuck with.

Most pros need a lot of storage and will use network-attached storage or other external devices. In this case, a non-modular Mac Pro’s internal storage won’t seem like a penalty, but it would be nice to have the ability to use an internal PCI-E card or even install good ol’ fashioned spinning hard disk drives. Thunderbolt can be used but some practicality is lost.

The Mac Studio follows the same storage configurations as all other M1 Macs, and you’ll have to pay at the time of ordering for more internal storage. But there’s something of an interesting twist: Teardowns have revealed two SSD storage slots in the Mac Studio that are not soldered and fairly easy to remove, though they’re locked by software. If The Apple silicon Mac Pro follows suit, Apple could allow users to buy extra storage from Apple down the line. It won’t be cheap but it’ll be a huge benefit to pros.

Modular Mac Pro: Old and new at the same time

Here’s a plot twist: What if Apple simultaneously updated the existing Intel Mac Pro to keep modular pros happy, while at the same time introducing a more non-modular design with Apple silicon?

Not so fast. With the release of Mac Studio, it becomes less and less likely that Apple will refresh the existing Intel Mac Pro with Intel CPUs. There are two major reasons for this:

With the current state of workflows and technology today, a non-expandable Mac Pro likely will not make happy existing Mac Pro users. Pros still rely on the ability to add and remove components to match their individual use cases. However, Apple has learned its lesson from past missteps, and I doubt it would go back to the days of the 2013 Mac Pro. But Apple silicon may still have a few surprises that could shape the future.