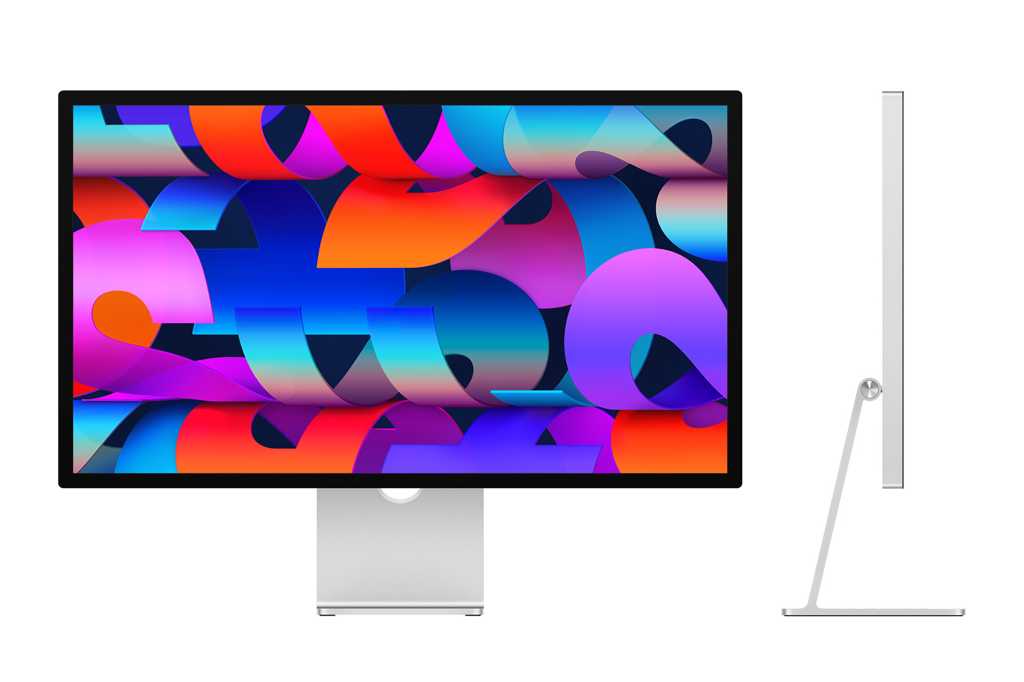 Apple’s ProDisplay XDR is impressive, but with a starting price of $4,999 (plus another grand for the stand), it’s way out of reach for most users, even high-end enthusiasts. At its “Peek Performance” event on Tuesday, Apple unveiled a new Studio Display, its first consumer-level display since the Thunderbolt Display that was introduced in 2011 and retired in 2016.

The Apple Studio Display is a 27-inch monitor with 5K resolution and P3 color, much like that found in the 27-inch iMac. It also includes a 12MP camera with Center Stage support, six-speaker audio, three-microphone array, and several USB-C ports. All these features are managed by a built-in A13 processor.

Starting at $1,599, it’s far more affordable than the Pro Display XDR, though still clearly a premium high-end product for enthusiasts. Pre-orders began immediately, and the display will be available on March 18.

The basic display specs of the new Studio Display align with those of the 27-inch iMac with Intel processor, which Apple has stopped selling.

The display has an anti-reflective coating by default, but a nano-textured glass option is available for and extra $300 if you need superior glare reduction.

Tilt is free, height adjustment is $400

Mac users have long complained about the lack of height adjustment on Apple monitors and iMac computers. A whole cottage industry of risers and stands exists to lift these products up a few inches. Well, we have bad news and good news. And then bad news again.

The bad news is the Apple Studio Display only comes with a tilt-adjustable stand that lets you set the angle of the display up to 30 degrees.

The good news is, you can order the display with a new tilt- and height-adjustable stand, which gives you 105mm (about 4 inches) of height adjustment.

The further bad news is, that option will increase the price by $400, to $1,999! There’s a VESA mount option available as well, which doesn’t cost any more (or less) than the tilt-adjustable stand.

The new Studio Display is not just a monitor. It’s got everything you need to turn your desktop Mac Studio or Mac mini into an iMac. That starts with the inclusion of a 12MP ultra-wide camera, the same as you’ll find on the latest iPads. The camera supports Center Stage, Apple’s feature to automatically crop and pan around the camera’s view to keep people in frame.

This will likely make the webcam experience with a Studio Display superior to every other Mac on the market.

Apple doesn’t want you cluttering up your desk with a bunch of speakers, and you can’t hold a video call without a Mac, so the Studio Display includes those things, too.

The three-microphone array has a low noise floor and directional beamforming, like in the 24-inch iMac. We’ve been impressed with the sound quality in the iMac, and this will probably deliver similar results. You can even use “Hey, Siri” hands-free.

Inside the monitor is a six-speaker system with force-cancelling woofers, again like that in the 24-inch iMac. It supports all the things we loved in the iMac speaker setup including wide stereo and spatial audio with Dolby Atmos.

The connection to your Mac is through a single Thunderbolt 3 port, which has bandwidth of up to 40 Gb/sec. That’s a step down from Thunderbolt 4 to be sure, but more than enough for a 5K, 60Hz display with no HDR. The Thunderbolt port can provide up to 96 watts of power, so you can plug in your MacBook and charge it. It’s even enough to fast-charge the new 14-inch MacBook Pro.

Is this the 27-inch iMac replacement?

The Studio Display monitor matches the display specs of the 27-inch iMac, and includes all the extra features you need to turn a desktop Mac–like the Mac Studio introduced at the same time or the Mac mini–into an iMac. It’s got a camera, speakers, mics, and ports. Such as it is, Apple removed the 27-inch iMac, one of its last remaining Intel-based products, from its site at the same time this was introduced.

Is this Apple’s solution for those wanting a larger desktop computer than the 24-inch iMac? Will there be no larger iMac at all, leaving everyone wanting a bigger display to buy a Mac desktop (or laptop) and Studio Display? It sure seems that way, but time will tell as Apple completes its Apple Silicon transition throughout the year.