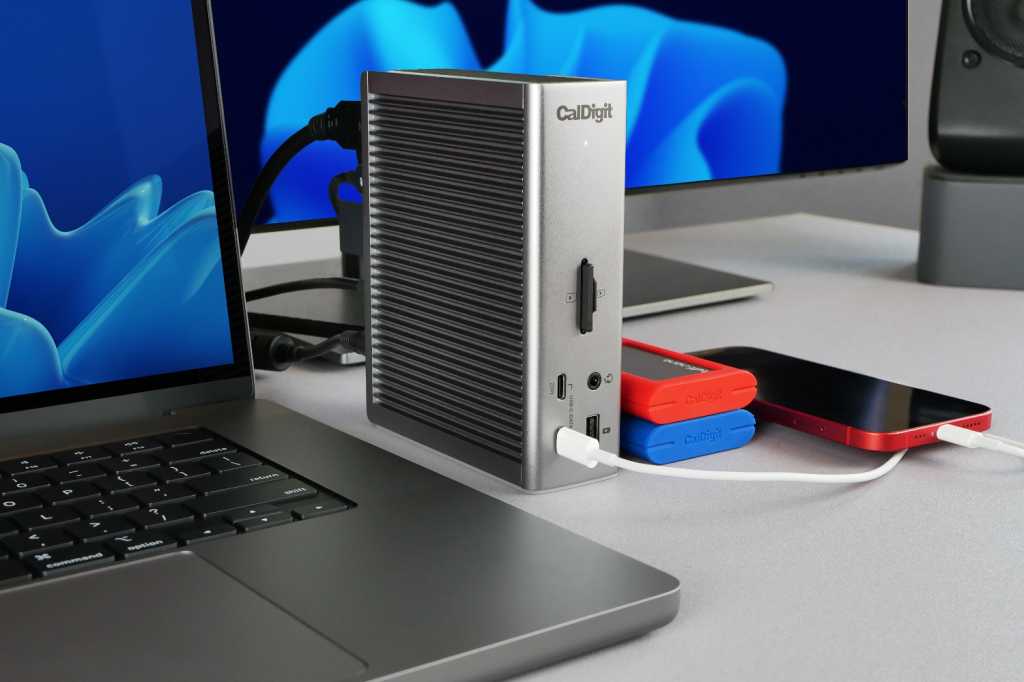 With a profusion of useful ports and high-wattage charging, the CalDigit Thunderbolt Station 4 turns a laptop into a desktop powerhouse.

Apple had a habit of being stingy with ports on its Macs for many years. The low-water mark was the 12-inch MacBook, the first of its computers with USB-C—and it sported just a single USB-C port for power and peripherals. Later iterations of the MacBook Air at least upped the count to two USB-C ports. Apple is changing, though—the company became downright baroque with the 2021 M1 Pro and M1 Max 14-inch and 16-inch MacBook Pro models, providing something closer to a pre-2016 range of built-in connectivity options.

But many laptop owners and some with desktop Macs still long for more ports—sometimes a lot more. If you ever felt, “What I really need is a dock with 18 jacks in it that draws over 200 watts of peak power,” the CalDigit Thunderbolt Station 4 (TS4) may answer your cry.

The TS4 has an almost absurd profusion of ports splayed across its front and back sides. Yet the choices about which ports and how many are thoughtful. It’s also not so much a dock as a combination of port extender and charging station, given its power-output design for recharging mobile devices and laptops.

A profusion of ports

Let’s start with the rundown because this dock has—as I’ve said—a lot of ports:

As with all USB-C-based ports, you have to devote one of your computer’s Thunderbolt connections to the dock; likewise, the dock has a connection specifically designed for the computer. If you’re connecting the dock to a laptop, as is likely, you can take advantage of the up 98W charge that passes over the dedicated computer port.

When you run the math on this dock, you don’t wind up with much additional Thunderbolt connectivity: the two unused Thunderbolt jacks on the dock replace the one occupied on your computer and net you just one additional.

CalDigit’s USB-C and Type-A jacks that use USB 3 standards are all 3.2 Gen 2’s 10Gbps flavor, allowing throughput up to that data rate over both USB-C and Type-A. (A compatible 3.2 Gen 2 Type-A device is required on the other end, of course, otherwise it drops to 5Gbps.) The USB-C Thunderbolt 4 ports are indistinguishable from Thunderbolt 3 in function and are backward and cross-compatible with USB standards.

The inclusion of 2.5Gbps ethernet is a nice bump up from 1Gbps, and reflects the growing availability of faster-than-gigabit wired networking available in the home and small office, and the inclusion of 2.5Gbps LAN ports on some higher-end home Wi-Fi gateways. You’ll appreciate it if you’re moving large files around your network or have a faster-than-gigabit internet connection.

The SD card slots have the extra of being spring-loaded. The extra push required makes it clear when you’ve fully inserted a card and gives you a little help when ejecting to remove it.

With this many ports, a little help managing mounted connected devices can help. CalDigit offers a Mac utility that shows all connected drives and allows a single click eject of those drives to avoid disconnecting the dock with mounted volumes. That software also allows the TS4 to support the Apple USB SuperDrive. SuperDrive support is uneven via docks and adapters due to peculiar power requirements.

CalDigit isn’t cheating with its port claim, by the way: the security slot and power jack (for up to 19.5 volts at 11.80 amps, or 230 watts) aren’t included in that total of 18. This gives CalDigit what I believe is the current bragging rights for most ports on a Thunderbolt dock.

Power to the Macs—and iPads

That’s the data side, but CalDigit considered recharging as a fundamental part of this AC-powered mega-dock. It requires a separate rundown to understand how it powers devices and at what wattages.

CalDigit pushes out three other wattages via specific ports:

Because the dock can suck in so much power, you can actively charge a laptop, an iPad, and multiple other mobile devices, including an iPhone, at full speed or nearly full speed.

Calculating the number of video adapters

The video part of the equation is quite complicated. Mac video support for external displays resembles the myth of snowflakes: no two is alike. It’s not entirely true, as a handful of Mac models can allow up to the same number and mix of external monitors. (My complete rundown on display support is here.)

Of Intel and M1 Macs of the last decade or so, some models include an HDMI port to allow a display of up to 4K resolution in addition to any other external displays allowed over other ports. For all Macs introduced since 2015, any other display is added via a USB-C connector on a Thunderbolt 3 or 4 port. (A handful of monitors have native USB-C-based DisplayPort connectors.)

Adding a dock doesn’t increase the number of displays you can attach to a Mac (or to a PC), but it does make it easier to do so and keep more ports free for other purposes. The TS4 includes a standard DisplayPort jack, reducing the need to use a Thunderbolt port with an adapter for most monitors. If your Mac can handle one 4K display via HDMI and one higher-resolution one over USB-C, the TS4 DisplayPort connection means you need no adapters at all.

If you want to add more displays or at higher resolution than a potential native built-in HDMI jack on your Mac and the TS4’s DisplayPort jack, you can only use a Thunderbolt port on the TS4 or one built into the Mac. That could come into play with newer Macs, like the Mac Studio and 14- and 16-inch MacBook Pros. The USB-only USB-C ports don’t carry DisplayPort video. (The dock splits USB 3.x traffic off separately from DisplayPort data.)

CalDigit has an extensive table about the quantity of displays support across which ports and at which resolutions for both Mac and PC models on the TS4 product page.

The CalDigit TS4 is the perfect hub if you want to set up a workstation with multiple monitors, external drives and peripherals, and wired input devices. You can just add your Mac laptop, and you’re ready to go. Some Mac mini and iMac owners might also find it useful for the sheer number of additional ports and the wattage that can be fed out of many of them for bus-powered devices and charging mobile hardware.

The only flaw in this jack-festooned dock is that it adds a net of one Thunderbolt 4 port. A net of two would have been better. But that may not be a drawback for the audience it appeals to—and where would you have put yet another USB-C jack on this device?

You no longer need to imagine the ultimate Thunderbolt 4 dock. It’s here, and it’s the CalDigit TS4.