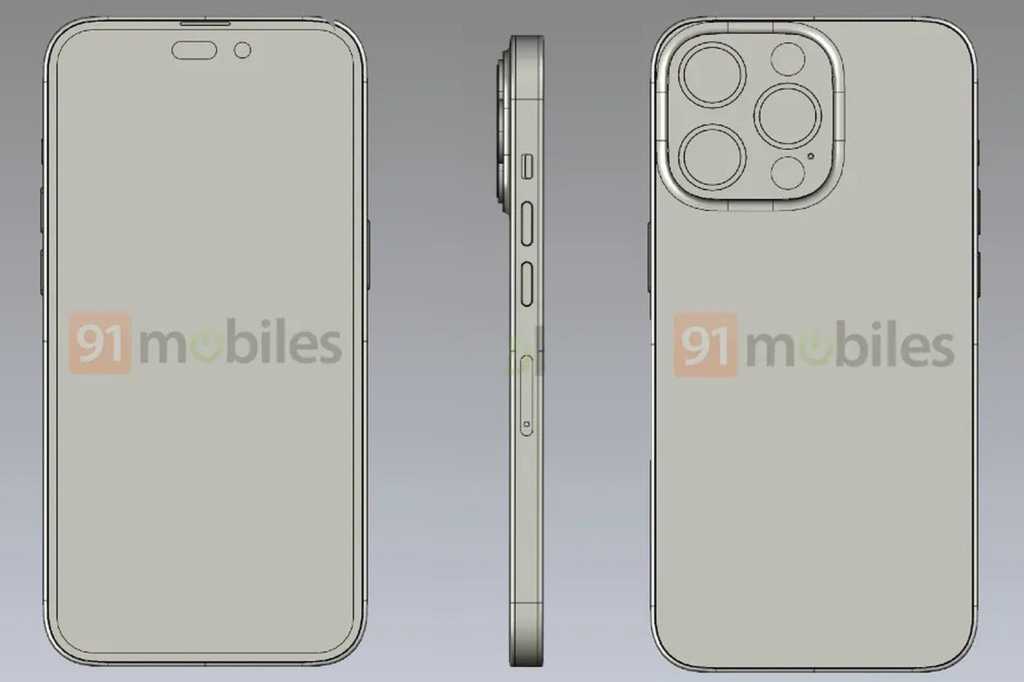 With five months still to go before Apple unveils its iPhone 14 lineup, a flurry of leaks this week has spilled many of the details about the next-generation handset. And it’s looking like it’s going to be a huge upgrade and a giant gamble.

First, there’s the design. Based on CAD renders of the iPhone 14 Pro leaked by 91Mobiles, the overall aesthetic appears as though the iPhone 14 will stick to the shape introduced with the iPhone 12: Flat edges, a square camera bump, and stainless-steel edges. There will obviously be new colors, but otherwise, the iPhone 14 Pro will be roughly the same size and shape as the iPhone 13 Pro.

The CAD drawings don’t specify the type of cameras that will be used in the iPhone 14 Pro, but it will reportedly once again have a triple-camera system. Previous rumors have suggested it will have a 48MP wide lens with support for pixel binning.

The big design changes affect the display. We’ve heard rumors and seen renders of a notch-less iPhone 14, and the latest leak seemingly confirms the previous reports of a hole + pill cutout for the camera and Face ID components. The cutout appears to be roughly the same width and depth as the iPhone 13’s notch, but with much more space around the sensors to give the appearance of extra room.

The changes aren’t just superficial. On Sunday, Ming-Chi Kuo reported that the iPhone 14 Pro would be the only model getting the A16 chip, a rumor seemingly confirmed by 9to5Mac a day later. Like the look, this would be the first time Apple split the two lines by generation of processor and a huge change for how Apple develops and sells its iPhones. It’s a risk and it’ll be interesting to see how Apple spins the difference.

People expect a new chip when they buy a new iPhone, and even the iPhone SE has Apple’s latest iPhone silicon. By making the A16 a Pro exclusive, Apple would presumably use the same A15 chip in the iPhone 14—or maybe tweak it slightly with an A15X or A15Z. That’s a big change and a much-needed refinement of what Pro actually means, but it remains to be seen how people will react. iPhone buyers are used to getting a new chip when they upgrade to the latest iPhone, and Apple would be clearly trying to push people to go Pro by changing that.

If the latest leaks are correct, Apple’s flagship phone is finally getting the Pro treatment it should have gotten years ago. While Apple has always separated its two iPhone lines with differences both subtle (stainless steel, ProMotion) and major (extra camera), it’s never gone so far as to offer a different processor and design. iPhone 14 Pro buyers will certainly feel like they’re getting an even better value, but what of people who don’t want to go Pro? With a notch and a recycled chip, the iPhone 14 might suddenly feel as stale as an iPhone SE.

It’s a gamble for sure, but given that the iPhone 14 Pro starts at $999, it could be one that pays off handsomely for Apple.