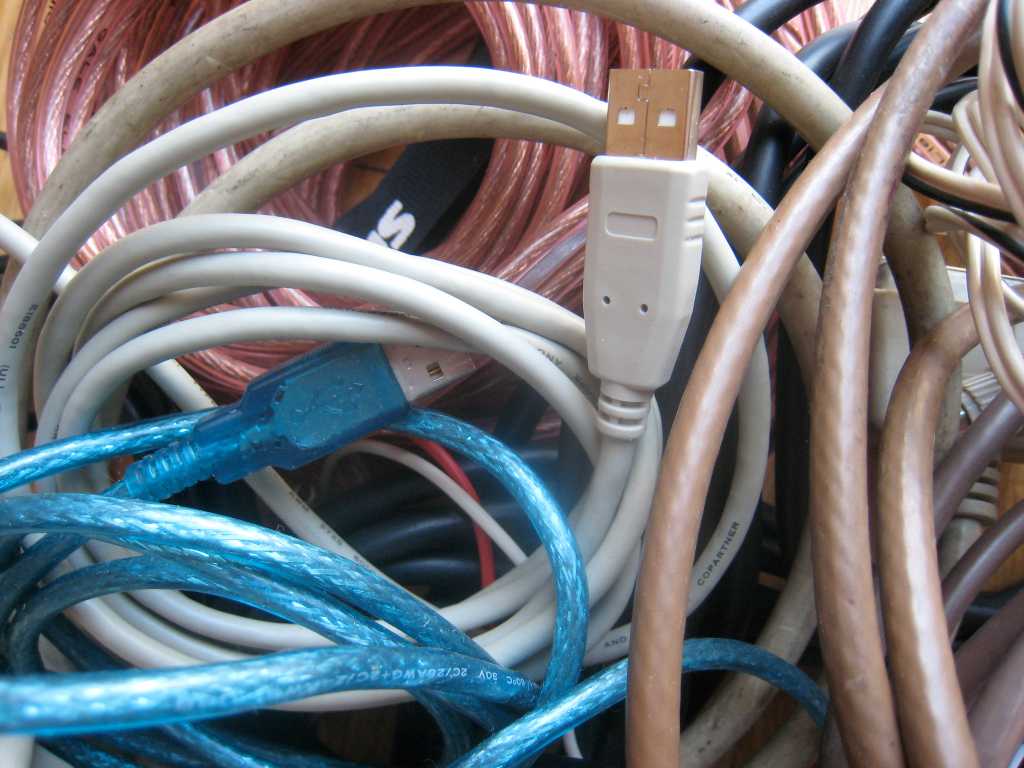 One of the world’s least-exciting sentences is, “Let’s talk about technology standards!” But I promise I’m not digging down into wiring schematics, pinout diagrams, and 1,000-page protocol descriptions. Rather, I want to help you get up to speed on how USB and Thunderbolt work separately and together so you know how you can best use them—and troubleshoot them when incompatibilities arise.

The path forward relies on the latest standards: Thunderbolt 4 and USB4. While not perfectly compatible with each other, they are nearly so. Most importantly, the two standards have effectively converged on a single cable type you can purchase and use almost universally with Thunderbolt 3 or 4, and USB 3.1, 3.2, and USB4 via USB-C.

The following is an edited excerpt from Glenn Fleishman’s book, “Take Control of Untangling Connections,” a guide to USB, Thunderbolt, DisplayPort, HDMI, Ethernet, and video connections and troubleshooting, available from Take Control Books.

USB: the once and future universal standard

USB was at one point the great hope of the future: Universal! Serial! Bus! All three words pointed in the right direction. Instead of many serial connectors and buses (and even some parallel ports), USB would unify many kinds of purpose into one controller with a limited set of jacks and plugs designed for different purposes. All USB devices could plug into any USB port, given the right cable.

A lovely idea, but one that was ruined by the large number of USB plug types that emerged. There are currently nine kinds of USB connectors. But that’s not the only issue: even though you may be most familiar with the rectangular USB Type-A plug and jack, a USB cable cannot have a Type-A plug on both ends, whether full-sized, Mini, or Micro.

In a chart from Wikipedia’s extensive USB entry, shown below, the eight kinds of USB connectors run across the top and down the side. The following points are worth noting:

However, the final column reveals the truth and the evolution: USB-C can connect to most formats—mostly importantly, to itself. (Mini-A and Micro-A are so rare, it’s not a real missing link that USB-C can’t work with them.) I’ll return to USB-C in a moment.

As USB connector types proliferated, the underlying technical standard evolved, too. The evolution drove the newer connection formats. USB from 1.0 to 3.0, and from 1.5 Mbps/12 Mbps to 5 Gbps, generally relied on the same rectangular Type-A connector. USB 1.1 (1998) became widely used and was particularly useful for keyboards, mice, and other input devices. USB 2.0 (2000) offered 480 Mbps, providing a rate suitable for external hard drives, and contending for a few years with FireWire 400 and 800 (Apple’s choice). But USB won out.

Its standards association, the USB Implementers Forum (USB-IF) released USB 3.0 in 2008, skyrocketed the data rate to 5 Gbps. Marketed as SuperSpeed, it also bumped up power flow from 150 milliamps (mA) to 900 mA, allowing for mobile device charging and bus-powered peripherals.

This is where I ask you to hold on to your socks and remove the space between USB and a digit. USB4 (see, no space) only allows for USB-C connectors and is an implementation of…Thunderbolt 3! USB4 can operate at either 20 Gbps or 40 Gbps; in the latter form, it’s marketed and labeled as SuperSpeed USB 40 Gbps.

The evolution of USB was therefore away from profusion and toward the USB-C single jack/plug type that could work everywhere—truly universal at last!

The Emergence of USB-C

Finally, a single connection type that was used on both ends of a cable, reversible by 180° as a plug inserted into a jack across its long end, had a compact factor, and could carry up to 100 W of power (and, later, up to 240 W). Power flow could go either way: a laptop or desktop could charge a mobile device or power pack, or vice versa.

With Intel’s adoption of USB-C starting with Thunderbolt 3 and the near-complete convergence of USB on Thunderbolt standards, it’s all perfect, isn’t it?

Well, no. First, people had invested a lot into equipment that had USB Type-A connectors. Early computers with USB-C jacks tended to scrimp, and docks with many USB Type-A ports were in short supply. From 2015 to at least 2019, people complained endlessly—and largely rightly so—that they had to buy and keep handy a large array of cables, adapters, and mini-docks. By 2020, it seemed to settle down: peripherals switched to either be USB-C based or included a cable or adapter, less-expensive docks were widely available, and computer makers—particularly Apple—decided to include more and different kinds of jacks to reduce the hassle.

Second, during the awkward Thunderbolt 3, USB 3.1, USB 3.2, Thunderbolt 4, and USB4 transition, you could wind up buying a USB-C cable that wouldn’t properly connect two devices with USB-C ports, wouldn’t connect them at the highest possible data rate (dropping to 10 Gbps, say, instead of 40 Gbps), or would only pass 15 W or 60 W of power instead of 100 W. That problem still hasn’t gone away, but it has decreased and will improve even more in the near future.

Third, as USB has moved from 3.1 to 3.2 to 4, and added options for power offered by ports and carried by cables, the profusion of markings has become more than baroque.

Thunderbolt doesn’t replace USB, but the convergence of it with USB does help clear away some of the underbrush, as I explain next.

Intel introduced Thunderbolt under the name Light Speed in 2010 and Apple—then a keen user of Intel CPUs—helped set the direction adopted it in all their computers. The original version of Thunderbolt offered what was then a blazing 10 Gbps of data simultaneously in both directions—so blazing that it outstripped most storage and other hardware of the time.

Recognizing the shortage of ports on computers at the time, Thunderbolt was built from the start with support for daisy chaining, similar in concept to the earlier SCSI standard, and something that made sense for stringing together a series of high-performance optical drives, hard drives, or arrays of drives in a single enclosure (RAID). Up to six Thunderbolt devices could be daisy chained.

The original Thunderbolt also allowed DisplayPort to pass over the same connection, and could provide at least 10 W of power.

First-generation Thunderbolt and Thunderbolt 2 relied on a plug/jack style identical to Mini DisplayPort. This was conveniently what Apple had already adopted a few years before for external video connections, making the transition easier—at least within that customer segment.

With Thunderbolt 3, Intel adopted the USB-C form factor in a completely standard fashion. Thunderbolt 3 brought several features and options to the communication standard. This is what you should expect from any Thunderbolt 3 port on any computer or device:

The two biggest changes that might affect you directly are cable and compatibility improvements. First, Thunderbolt 4 cables up to 6.6 feet (2 m) don’t have the “active” circuitry requirement that was needed in Thunderbolt 3 to achieve 40 Gbps regardless of cable length. Second, Thunderbolt 4 jacks must be fully backwards compatibility at least 10 Gbps USB 3.1/3.2, but can support up to 40 Gbps USB4.

This change alone should bring a lot of relief from cable clutter, standards confusion, and frustration over low data rates or incompatibility. But there’s more! Here’s what else you can expect from Thunderbolt 4:

The biggest area of port and cable confusion I ever encounter is the matrix of compatibility between generations of USB and Thunderbolt. It’s natural to be confused: the two have converged, but in what ways?

Here are the simplest ways to distinguish the capabilities of USB4 and Thunderbolt 4:

These differences largely apply if you’re have a high-performance environment in which the difference among 10, 20, and 40 Gbps throughput is crucial. For most people, owning a computer with a Thunderbolt 4 port and purchasing a 10 Gbps USB 3.x or USB4 device won’t have a high impact.

But it also makes your choice of cables and peripherals moving forward far simpler than in the past.

First, when buying new peripherals check the capabilities of your computer or mobile device. If it only supports USB 3.0, 3.1, or 3.2, you can opt for what is typically a far cheaper USB 3-only peripherals, like an SSD, than a Thunderbolt 3 or 4 model. For Mac users, you can often pick between USB 3.x and Thunderbolt 3 or 4 on the basis of performance and cost because Apple offers Thunderbolt 3 and USB 3.1 all from all new Macs starting in 2016.

Third, avoid two kinds of cables: “Charging-only” USB-C cables, which offer up to 100 W of power but only 480 Mbps of data; Apple still ships one of these with some of its laptop models; and “active” Thunderbolt 3 cables if you work with a mix of USB 3.x and Thunderbolt hardware. An active Thunderbolt 3 cable throttles USB to 480 Mbps as well; a Thunderbolt 4/USB4 cable works at the full 5 Gbps to 40 Gbps rate available across USB 3.0 to USB4.

Most of the compatibility confusions, cable clutter, and port mismatches of the past have disappeared with new standards and cables. Keep yourself informed to get the best results with legacy gear, but you can look forward to a simple future.

This was an an edited excerpt from Glenn Fleishman’s new book, “Take Control of Untangling Connections,” a guide to USB, Thunderbolt, DisplayPort, HDMI, Ethernet, and video connections and troubleshooting, available from Take Control Books.