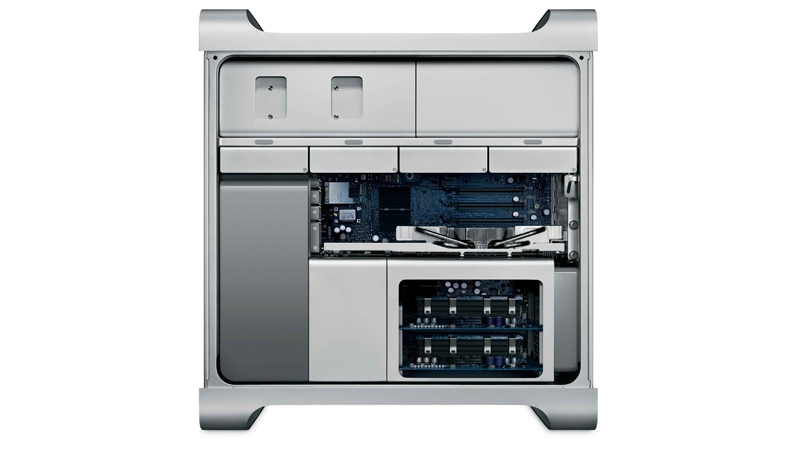 There’s no denying that the 8-core Mac Pro is incredibly fast. And while we find cooing over its impressive benchmarks fun, we are starting to question whether it’s really what we are looking for from Apple. The design is superb, but old. We’d also rather have a cheaper entry-level desktop than increasingly fast units. However, it will be incredibly useful for high-end video and 3D design environments and the Mac Pro remains exceptionally good value for money.

Apple hasn’t looked back since it switched from PowerPC to Intel-based processors. Not only is the Mac Pro the fastest desktop computer on the market, it also sports Apple’s famous design and build quality. More importantly, it’s substantially cheaper than rival Windows-based units.

In fact, it’s hard to see why the Mac Pro isn’t flying off the shelves. But take-up has been relatively slow, with the more stylish iMac and MacBooks topping the charts, while the Mac Pro hovers around.

One reason might be the previous lack of native Adobe software on the Mac platform. It may be that many users had stuck with the older G5 units for professional design until the Creative Suite ran natively on the Mac. Now that Creative Suite 3 is out and native Intel performance is in place, the Mac Pro has gone from interesting to look at, to a potentially vital purchase.

The 3.0GHz processor is exclusive to Apple (at least for the time being) and is the fastest ‘Clovertown’ processor on the market (Apple doesn’t refer to Clovertown in its specifications of the Mac Pro, but that’s the Intel processor at its heart). Rival PC makers only have access to the 2.66GHz model and aren’t expected to get their hands on the 3.0GHz unit until July 2007.

Aside from the exclusive and – admittedly very fast – CPU, the new Mac Pro remains identical to its predecessors. This is hardly surprising as the unit itself is sold as ‘fully configurable’, so you choose the same Mac Pro on the Apple Store and upgrade the chip from the suggested ‘Two 2.66GHz Dual-Core Intel Xeon’ to the new ‘Two 3.0GHz Quad-Core Intel Xeon’ option and pay an extra £960 in the process.

There are still four hard drive bays, offering up to 3TB of internal storage. They also have the normal complement of AirPort Extreme wireless ready and optional Bluetooth 2.0 support (although you need to pay £50 extra for these).

An Apple spokesperson told Macworld: “The 8-core Mac Pro gives pro software developers a platform to prepare new versions of their apps for the future, when 8-core technology is more prevalent on the desktop.”

Speed testing of the Mac Pro throws some interesting statistics to light. Compared to a Mac Pro 2.66GHz Dual-Core Xeon, the performance boost when rendering 3D scenes or video effects is obvious. In Cinebench 9.5 (the benchmarking suite based on Maxon’s Cinema 4D 9.5 3D animation application) the new Mac Pro attained a rendering score of 2,318 – 4.74-times faster than using a single processor core. This is almost 68 per cent faster than the older twin dual-core Mac Pro.

Rendering a 10-second multi-layered HD composition in After Effects 7 professional threw up some equally impressive stats. The Mac Pro 8-core rendered the scene three-times faster than the old dual dual-core. It also rendered the scene over five-times faster when using Nucleo (a plug-in designed to boost rendering speed on multicore processors, www.gridironsoftware.com).

Card options While the 3D performance is impressive, it’s important to note that the only truly workstation-class 3D card that Apple offers is the NVIDIA Quadro FX 4500, which adds a hefty £1,050 to the price. A slightly cheaper FX 3100 option would have been welcome.

There are also other aspects of the Mac Pro we find conspicuous in their absence. Most notably the lack of a Blu-ray or HD-DVD recording option. It’s no secret that the addition of a second optical drive bay exists so that the device is primed to run both a Superdrive and a next-generation optical drive.

Both Blu-ray and HD-DVD are commercially available; you can purchase external options and PCs come with them built-in. So why the tardiness from Apple? We can only guess that high-definition recording is part of OS X Leopard, and Apple is waiting for the next operating system before including support for Blu-ray/HD-DVD.

The Mac Pro 8-core is indeed a machine of vast power, and one that every member of the Macworld team would jump at owning. For all this though, the device is still a contradiction. Ever since the Mac Pro came out Apple’s high-end workhorse has not just been a reasonably priced Mac, but the best-value PC on the market. And it offers far better design and build quality than other offerings.

However, and this is the crux of the matter, the Mac Pro is still expensive. Not when compared to similarly-specced PCs, but just expensive in general. The entry model at £1,509 is £150 more than the top-end 24-inch iMac, which, despite only having a Core 2 Duo processor comes with a whopping big screen plus built in Bluetooth and AirPort.

In our review of the Mac Pro (Macworld, October 2006) we said: “If you don’t run high-end professional applications… you might find the iMac better value.” A train of thought that seems ever more valid with every faster Mac Pro that comes to market.

And although bigger, better and faster Macs are always welcome at Macworld, we can’t help but have the nagging suspicion that what most of our readers really want is a cheaper, entry-level Mac Pro at around the £1,000 mark. A tower system such as the Mac Pro has several advantages over the iMac: you can add your own monitor (or take it with you when you upgrade), you can slot in extra hard drives as you go (handy in this media storage day-and-age – plus a second hard drive is a helpful way of keeping Vista separate from Mac OS X); you can also easily bump up the memory and add faster graphics cards at a later date (when they’ve come down in price). The upshot is that you don’t necessarily need a processor capable of performing scientific-class calculations to find a tower system useful.

The air-vented style of the Mac Pro is starting to look a little dated, and its gargantuan size seems a tad unnecessary now that it no longer needs to house nine separate fans. However, it remains a joy to add and remove components compared to the faff you go through with most PC systems.