Is Mac OS X 10.5 Server worth the £319 retail price (for the 10 file-sharing user version; an unlimited client version, no CALs required, sells for £629)? (If you buy a new Xserve, you get it for free.) It depends. If you don’t already have a directory service or dedicated servers, and are just now thinking about implementing such things for the first time, Mac OS X 10.5 Server is a compelling product; just keep in mind that some of its services don’t work as well as they should in a heterogeneous environment. On the other hand, if you’re an experienced administrator, you’ll likely be frustrated by the limitations in Apple’s GUI server tools; fortunately, OS X Server is based on Unix, so you can have all the control you want via the command line.

If you asked Mac IT people what previous versions of Mac OS X Server have been missing, a calendar server would be at the top of most lists. Mac OS X 10.5 Server fills that gap.

For the most part, iCal Server is easy to set up. The only big problem we had was trying to get delegation – which enables users to access and edit each others’ calendars – to work. Part of the problem could have been our particular setup (we had Mac OS X Server participating in a Windows Active Directory network). Even though the problems aren’t endemic to iCal Server, be aware that delegation in iCal Server can be fragile.

The other big issue with iCal Server is in its support for the CalDAV group-scheduling standard. Right now, iCal 3.0 – the version that comes with OS X 10.5 Leopard – is the best CalDAV client for the Mac. That means clients on your network will have to be running OS X 10.5 to get the full benefits of OS X 10.5 Server’s calendaring services.

If your company is all-Mac, that iCal-requirement probably won’t be a big issue; just make sure all your clients have upgraded to Leopard. But if you’re in a mixed environment, or if you’re switching from some other group-calendaring platform (such as Exchange), iCal Server could be limiting. Microsoft Outlook doesn’t directly support CalDAV; the plug-ins that would allow this are still being developed. Without Outlook support, trying to combine Windows calendaring clients with iCal Server is more work that many small- or medium-sized companies will want to take on.

Mac OS X 10.5 Server also provides several improvements to its iChat service. For many companies, its new logging tools will be the biggest change. If you have to deal with the myriad corporate regulations about data retention, chat logs are a requirement if you’re going to provide IM services on your network. You could log chats in Mac OS X 10.4 Server, but it required third-party software and setup was not simple. With Mac OS X 10.5, logging just another option in the administration interface. The new iChat Server also offers “store and forward” messaging, so offline users can collect instant messages. Finally, you can set up iChat server to talk to other IM services via federation; unfortunately, the only major public IM services with which iChat Server can currently federate is Google’s. 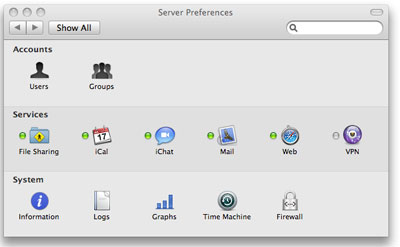 For simple and workgroup installations, you can now use Server Preferences

In an all-Mac environment, iChat Server is a great way to implement instant messaging. But as with the calendaring service, it’s trickier if you’re in a heterogeneous environment. Since iChat server is based on the Jabber protocol, you have to use a Jabber-compatible client. While there are many such clients available for text chat functionality, support for file transfers and A/V is more hit and miss.

Mac OS X 10.4 Server offered decent, if limited, support for blogging. With Mac OS X 10.5 Server, Apple has revamped that support. It’s easy for network users to set up wikis (collaboratively edited documents) quickly, with the ability to track changes, revisions and users. Wikis are perfect for creating company documentation; for example, we use them to develop online IT manuals. Mac OS X 10.5 Server’s implementation is simple to use; it doesn’t, for example, require any special coding. You can define different levels of access, so you can lock down who gets to write and edit.

Mac OS X 10.5 Server makes it easier to implement these and other services by offering several new installation types; these let you install Mac OS X Server without having to manually configure every detail of every service. The “Simple” and “Workgroup” installation types allow you to quickly set up servers either in standalone mode or as part of an existing directory service.

These new installation types are handy, but they do have some problems. For example, if you upgrade a Workgroup installation to Advanced, you can’t revert it to Workgroup. To administer Advanced installations, you have to use the Server Admin application instead of the simpler Server Preferences.

That said, Server Admin has received a major facelift. The UI has been changed to better deal with large numbers of servers, and it has better monitoring features to help you keep tabs on those servers. There are also new Dashboard widgets that show you the state of your servers at a glance. 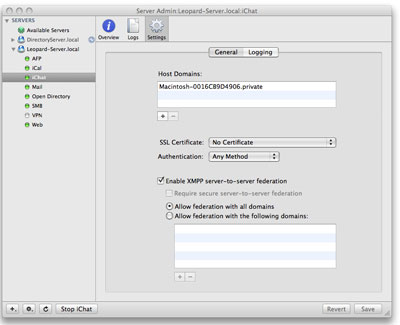 For more advanced installations, you use the Server Admin utility to manage services; for managing users and groups, you use the Workgroup Manager

The Workgroup Manager interface itself is quirky. For example, when you increase the size of its window, only one part of the window actually expands. You can’t view your directory as a directory; you can only view individual containers within the directory. In Active Directory and Novell’s eDirectory, moving users or machines between groups and containers is a simple drag-and-drop operation; Mac OS X 10.5 Server requires a more complicated multi-step process in the GUI or use of the command line. Finally, you can’t use Mac OS X 10.5 Server’s administrator tools to manage Mac OS X 10.4 Server or older without upgrading those servers to Mac OS X Server 10.4.11; that limits its usefulness as the backbone of a larger network.

Mac OS X 10.5 Server has been improved in some ways when it comes to working in heterogeneous environments. Active Directory integration now allows both server and client versions of Mac OS X 10.5 to work correctly with Windows SMB packet signing. In addition, Apple has introduced the concept of “augmented” users, or users imported from other directory services. This makes managing Mac users in non-Apple environments easier. In testing, we found that we could manage Active Directory users within the Mac environment almost as easily as Mac-only users.