iTunes 8 is worth upgrading to for Genius alone. The refined podcast settings and new visualizers are also welcome additions. Grid view looks pretty, with a properly prepared library, but isn’t the most practical way of browsing your library especially in an age when the single is outselling the album.

The last few major updates to iTunes have added everything from new looks to the ability to watch movies and TV shows, download podcasts, and get recommendations for iTunes Store purchases. It would seem that all that could be done to Apple’s media manager and player had already been done. But it turns out that Apple still has some tricks up its sleeve with iTunes 8. The latest version returns the sense of fun to listening to music on your Mac (or PC). 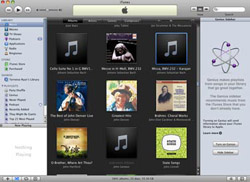 Grid view The first thing you’ll notice after installing and launching iTunes 8 is a progress bar churning through your iTunes library. This one-time process creates album art for the new default view of iTunes: Grid view. Very similar to Events in iPhoto ’08, the Grid view displays your iTunes library as a grid composed of album art. (This view is available for music, podcasts, and videos.)

Think of it as a flattened Cover Flow, the same eye candy with about the same amount of practical use (that is, very little). You start playing an album or video by clicking on the album art. Double clicking on an album takes you to a more traditional list view with the addition of artwork in the first column. To change what view iTunes defaults to when you launch the program, simply change to your desired view before you quit iTunes.

If you’re the type who makes sure that all your albums have cover art, and all the genres are applied correctly in the metadata of your media, then Grid view is going to be your new best friend. If you’re like me, Grid view is going to serve as a reminder that yet another aspect of your life is out of control. No where is this more evident than in the Grid view sorted by genres. Apple has provided a number of tastefully designed stock art images for genres found in the iTunes Store. When in this view, you can scrub through the albums in each group by dragging your mouse across the artwork, much like Events in iPhoto and footage in iMovie. The problem arises when you have music that wasn’t purchased from iTunes. A surprising number of genre name variants crop up, leaving you to either edit the metadata for a cleaner, more organized experience or live with a sloppy iTunes library.

Genius The Grid view is flashy, but the real game changer in iTunes 8 is Genius. Genius comes in two guises, Genius Playlist and Genius Sidebar, and is similar to music recommendation offerings by Last.fm and Pandora. If you choose to use Genius, which is optional, a few things happen. First, it analyses your iTunes library and transmits that data, anonymously, to the Apple’s servers. That data is compared to data from countless other iTunes 8 users, and fed into Apple’s Genius algorithms. The algorithm then reports the results back to iTunes, which uses it to create Genius playlists of 25, 50, or 100 songs, based on whatever track you select. You can listen to that playlist, save it for later, or hit Refresh and have Genius create another playlist that is more to your liking. Much like Party Shuffle, you can delete songs that you don’t want to be included in the playlist, and re-order the songs.

A sample Genius playlist. The new Genius feature does a great job of helping you rediscover music in your library.

After creating countless Genius Playlists, I am a convert. This is a great way to rediscover music that has been hidden away in the depths of your iTunes library, and it groups songs that I would never think of grouping myself (“Veronica” by Elvis Costello goes well with “Debaser” by The Pixies—who would have thought?). Genius did an admirable job of creating playlist after playlist with almost everything I threw at it (including a song by Raina Rose, a folk musician who also happens to be my girlfriend’s sister).

When Genius can’t create a playlist it pops up a warning, and suggests that you update the Genius data on your Mac. Classical music, in particular, seems to stump Genius. And since this initial version of Genius appears to derive a lot of its data off iTunes Store purchases, songs by artists not in Apple’s online store—like, say, the Beatles—can also flummox it. Click on a tune by the Fab Four, and Genius will be unable to generate a playlist. Presumably, as the feature gets more data from more users, issues like these should, theoretically, become moot.

The Abbott to Genius Playlist’s Costello is the Genius Sidebar, which marries the iTunes Store’s Just for You recommendations to the mini-store interface that was introduced in iTunes 6. The Genius Sidebar takes the currently playing song and, using that fabled Genius algorithm, returns recommendations from the iTunes Store. The recommendations include songs and albums you might be interested in, as well as songs that iTunes believes are missing from your library (for example, perhaps you only purchased one or two songs off of an album). I’ve found myself losing a number of hours checking out songs that the Genius Sidebar suggested. You can preview songs right in the sidebar, while you have to go into the iTunes Store to check out albums. Both can be purchased with one click in the sidebar, so you should either disable 1-Click purchases or practice restraint.

The Genius Sidebar does have some limitations. It has a propensity to recommend songs and albums I already own (purchased from Amazon MP3 or ripped from CD). It has trouble basing recommendations on more obscure titles (though when recommendations can’t be found, the sidebar displays a list of top sellers in iTunes, so you can still spend some money if you are so inclined). Genius does take some time to analyze your library when you launch iTunes 8. It took 28 minutes to analyze my library which contains 35.50 GB of data (7,774 items), though you can still use iTunes to listen to music or watch videos as Genius is analyzing your library and then talking to the cloud.

Other new features The new features in iTunes 8 don’t end there. HD TV shows have been added to the iTunes Store at $2.99 a pop from a limited number of networks at the moment. (There are a total of 17 shows from ABC, NBC, and Showtime available for purchase as this review was posted.) The shows look very good at their native resolution of 1,280 by 720, which translates to 720p, though when viewed on a larger television or computer screen, the picture does look a little soft. That said, HD shows look much better than their standard definition siblings.

Sadly, you can’t watch the HD files with your iPod or iPhone, but the $2.99 includes both the HD and standard definition versions of the episode. Be careful, though, because file sizes can add up quickly. I downloaded an HD episode of Battlestar Galactica, and both files took up nearly 2GB of disk space.

Another thing to be aware of, as reported in our iTunes 8 first look, is a bug in iTunes 8. If you have “Buy using a Shopping Cart” enabled the iTunes store allows you to add HD episodes to your cart, but when you purchase the episode only the standard definition file is downloaded to your Mac; “Buy and download using 1-Click” works like a charm.

iTunes 8 also gives you more control over podcast settings. Prior to version 8, iTunes would deal with podcasts as a large blob; settings applied to all the podcasts you subscribed to, so you couldn’t keep episodes of, say, PodRunner longer than episodes of the Macworld podcast. You can now customize download frequency and retention settings for each individual podcast, in addition to setting a global default. 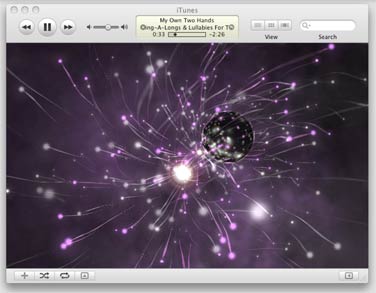 Finally, iTunes 8 includes new stunning visualizers. I recall sitting for hours watching the visualizer when iTunes was first introduced, and the new visualizers blow the previous iterations out of the water in terms of quality and wow factor. They played back smoothly on my 2.16GHz Core Duo MacBook Pro with 2GB of RAM. In fact, iTunes 8’s interface as a whole was snappy on my Mac, though using my 35GB library, I didn’t note any major speed enhancements compared to iTunes 7 during normal operations.

It is clear that with iTunes 8 Apple is hoping you’ll find even fewer reasons to venture outside of the iTunes/iPod ecosystem for your music and video needs. The only misstep in iTunes 8 is the removal of the preference to disable the iTunes Store arrows in your library. While there is a Terminal command to disable those grey arrows from showing up, Apple should make it easy for a user to turn off this little piece of visual clutter. On last thing: If you’re looking for the Browse button it’s now available only though the View menu (select Show Browser).