When the iPod touch was first released, criticism of its physical design focused largely on its lack of hardware volume controls. People routinely put iPods in their pockets, and it’s a bother to pull it out simply to adjust its volume.

Apple has responded to this criticism by placing a volume rocker switch, similar to the one found on the iPhone, on the left side of the touch. It works exactly as it does on an iPhone. Press the top of the switch and the volume increases. Press the bottom and the volume goes down. The interface reflects these presses by moving volume sliders in the interface. While the iPod touch’s interface remains impossible to navigate from within a pocket, this addition is welcome.

Adding an integrated speaker is also welcome, though what you get is hardly hi-fi – less so than even the iPhone’s speaker. Apple describes this speaker as being for “casual listening” and “short-form content,” such as previewing songs at the iTunes Store, YouTube videos, short podcasts, and games. And it’s a reasonable option for all four purposes (though if you plan to spend a fair amount of time with a game that features rich music and sound effects, you’ll want to jack in a set of headphones to get the most out of it). It’s not, however, a great speaker for TV shows, movies, or music. Its sound is very bright, tinny, and not terribly loud. If you were hoping to regain the use of your iPhone on long car trips because your kid in the back seat has commandeered it to watch Ratatouille, forget it. The 2G iPod touch’s speaker just won’t cut it.

Yeah, I called you yellow! When you compare the second-generation iPod touch to the original iPod touch or an iPhone, you’ll find its screen “warmer” (read: yellower) in cast. With the iPhone 3G, Apple moved to this warmer display tone because it felt it provided the best look for all the content the device was capable of playing – meaning photos and video. The latest iPod touch’s screen is even more yellow than the iPhone 3G’s. Apple claims this was a deliberate choice rather than some kind of power-saving measure or a result of the native characteristic of the display components.

When viewed side by side with an older iPod touch or an iPhone – particularly when looking at a settings screen that has a lot of white on it—the 2G iPod touch’s display looks dingy in comparison. But put those other devices aside, use the iPod touch as it was intended, and you’ll forget all about its warmer cast. 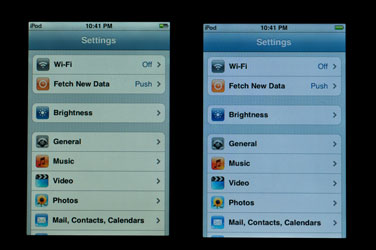 Software and interface The 2G iPod touch comes with the latest 2.1 software, which brings some improvements and changes to the iPod. The primary improvement is the addition of the Genius feature. We cover the iTunes implementation of this feature elsewhere, and I described its implementation on the iPod touch in my first look. So, suffice it to say, it’s an easy-to-use feature that hits far more than it misses. Those with large music libraries who use the feature will routinely encounter tracks they forgot they owned. 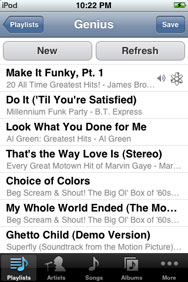 The iPod touch’s 2.1 software has addressed some of the previous 2.0 software’s worst failings, including slow syncing and backups and interminable waits while applications install and update over Wi-Fi. Backups that once took hours now take seconds or a few minutes. As I mentioned in my first look, I updated a copy of Twitterrific on the 2G iPod touch in just 20 seconds. On a first-generation iPod touch running software version 2.0.2 it took more than five minutes.

Additionally the 2.1 software brings some minor interface enhancements. When you create an alarm in the Clock application, for example, you can now choose from among the same alert sounds found as ringtones on the iPhone. (You can’t, however, add custom alert sounds.)

When you view the Podcasts screen on an iPod touch running the 2.1 software you’ll find that the icons and text are larger than they were under previous versions of the software. This is helpful when you need to quickly identify a podcast by its icon, but because the text is so large, it’s cut off after 16 or 17 characters.

When you tap a podcast, the list of episodes provides more information that it once did. You now see the name of the podcast and its episode name, length, and date. Episodes you haven’t listened to are marked with a blue dot. If you listened to part of an episode, it’s marked with a half dot and the amount of remaining time appears below the episode title. Any podcasts you’ve played to the end have no dot next to them. (Videos are similarly marked to denote never played, partially played, and played to the end.) Songs also provide more information. When you view songs in the iPod’s Music area, you now see not only track titles but also the name of the album and artist. 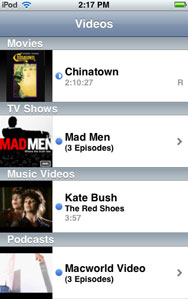 Podcasts play differently than they once did. When you play an episode of a podcast on an iPod classic or 3G or 4G iPod nano, the podcast plays to the end and then the next episode in the list (if one exists) begins playing. With the iPhone and iPod touch running versions of their software prior to version 2.1, a podcast episode would play and then you’d be taken back to the list of episodes. The iPhone and iPod touch now behave like the iPod classic and modern nano and move directly from one episode to the next. Given how many people listen to podcasts while driving, this is not only convenient, but considering that you can only navigate an iPod touch by, well, touch, it makes for safer driving.

Performance and playtime I tested the iPod touch with a variety of low- and high-end headphones and speakers—both attached to the headphone port and from the audio port on an Apple Dock—and was happy with what I heard. The audio coming from each is solid and clean. As usual, you’ll better appreciate that audio with a set of headphones (or a speaker system) better than those bundled with the iPod.

Though hardly surprised, I remain sorry that video output works only with Apple’s £29 audio cables and those accessories that carry Apple’s proprietary authorisation chip. Similarly, those with older iPod accessories that charge iPods using the power pins for a FireWire connection will be disappointed that these accessories won’t charge a 2G iPod touch. Like the iPhone 3G, the 2G iPod touch requires charging over USB only.

I was more pleased that Apple has built-in support for the Nike + iPod Sports Kit. While the iPod touch may be a little bulky for some exercise enthusiasts, it’s nice that you needn’t add an extra bit of bulk in the form of a receiver dongle.

And I was frankly tickled with the 2G iPod touch’s audio playtime. Apple suggests that it can play audio continuously for 36 hours. In a test where I turned off Wi-Fi and asked the iPod to play a list of more than 1,400 MP3 and AAC-encoded tracks (each between three and six minutes in length), it played for 41 hours and 12 minutes before its battery ran out of power. Regrettably, the 2G iPod touch didn’t live up to Apple’s claim of 6 hours of continuous video playback. With brightness and volume set at their middle marks, I played Pirates of the Caribbean: The Curse of the Black Pearl over and over until the battery died. It fell short of the 6-hour mark by pooping out after 5 hours and 34 minutes.