If you have a MacBook or MacBook Pro this is a truly great way to turn your laptop into a desktop computer, it’s certainly more focused than any other display, and the built-in power and USB connections are a boon to any laptop owner. And there’s no denying that it offers superb visual quality, we truly were impressed by the vibrancy of this monitor. However, if you’re a print designer or a photographer and you need reliable colour calibration, Apple’s LED Cinema Display for MacBook simply isn’t for you – the image quality just isn’t accurate enough. Maybe no glossy display ever will be. But if you’re looking for the best way to watch and edit movies, play games, or simply want work in style – then this monitor delivers in abundance.

So, we welcomed the news of Apple’s Cinema Display for MacBook. Here is a brand new display, much in the style of Apple’s iMac and offering a fresh angle on what monitors are for.

This screen isn’t created with the Mac Pro desktop in mind, but Apple’s MacBook range of laptops. To this end the Cinema Display for MacBook comes with not one, but three cables: a Mini DisplayPort cable, a USB 2.0 connector and a MagSafe power adaptor. These plug in to the side of the MacBook and provide power and connectivity. On the rear of the display sits three USB 2.0 connections – slot a keyboard and mouse in to the back of the display and you might as well be running an iMac. Surely this offers the best of all worlds?

Well, yes, it does, but it comes at a price (and we’re not just talking about the fairly substantial £635 ticket price) – there are a number of other factors to consider here. 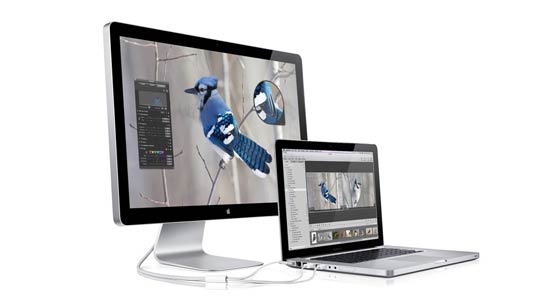 The first issue is the Mini DisplayPort, which is a replacement for Apple’s ageing Mini DVI connection previously found on iMacs, MacBooks and older PowerBooks. Apple gets bonus points for opening up this Mini DisplayPort standard to the market, offering it as a no-fee connection for any monitor or computer manufacturer looking for an alternative to DVI (which requires a license fee). So Apple seems serious about making this a de facto standard for smaller computers.

However, Apple promptly loses all bonus points for leaving everybody other than the owners of the brand new MacBook range out in the cold. This is because every other Mac uses a variant of DVI and Apple has – so far – failed to provide any adaptor for owners of older Mac computers. To say this strikes us as odd is something of an understatement – it’s frankly baffling.

All the more so because this monitor doesn’t complement Apple’s monitor line-up, it actually replaces the mid-range model, which we assume is the most popular model on sale. So if you have last year’s MacBook and want an Apple monitor you have to go down to a 20in model, or up to the whopping 30in display.

It may be that adaptors are in the pipeline, making this something of a moot point, but seriously… how complex is a plastic adaptor to build compared to a whole new monitor? Surely Apple could have supplied previous MacBook owners with an option other than upgrading to a new laptop. In the meantime the lack of an adaptor seriously limits the market for this display.

(As a quick aside to this, there’s also a feeling of “yet another” display standard from Apple; this is the company that introduced a brand new Micro DVI connection for the MacBook Air in January this year, only now to phase it out with this Mini DisplayPort connection less than 11 months later – possibly the shortest lifespan of a connection ever.)

Were it that the DisplayPort was the only contentious issue surrounding the LED Cinema Display for MacBook, the new display might have had an easier entrance to the world. Sadly that’s been overshadowed by a bigger debate over the nature of the glossy screen, but before we get to that we want to take a look at some of the new features in the LED Cinema Display. 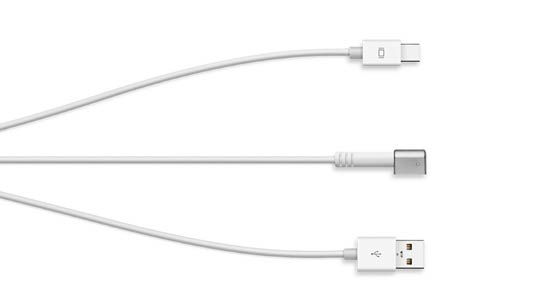 First of all we’d like to mention that Apple is making good on its environmental promise. As with the iMac and MacBook the new LED Cinema Display is made mostly out of recyclable aluminium. The LED backlit display is mercury free and may last longer than CCFL backlights found in most LED monitors. As a bonus, the use of LED technology means that it fires up much faster than the LCD models it replaces.

The new display includes an iSight camera and microphone, which although welcome has a sensation of being so overdue that it no longer even seems pertinent. It also has built-in stereo speakers in the bottom of the display and a third that bounces sound off the stand towards the user. It’s an interesting setup, although we found the sound slightly tinnier than on the iMac: although it is an improvement over the built-in speakers on the MacBook.

The build quality of the display is second to none, though, offering the same kind of sturdy look and feel of the iMac. The black bezel ensures that it stylishly matches up with the latest range of MacBooks.

As with previous Apple displays you’re limited to changing the angle of the display; there is no option to adjust the height of the monitor, which is something rival models in this price range offer. There is also a noticeable lack of on-screen controls, with every setting for the monitor accessed through the Displays option in System Preferences.

Still, there’s no denying that the new LED Cinema Display is a stunning piece of kit to look at. But how does it fare when you plug it in and fire it up? 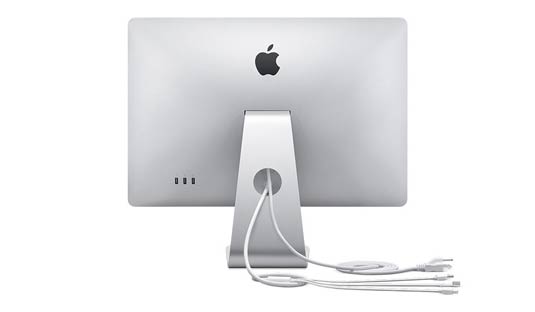 Apple’s LED Cinema Display is made of environmentally friendly aluminium. On the rear are housed three USB 2.0 sockets

The specifications of the LED Cinema Display are fairly standard stuff from a high-end 24in monitor. It sports 330 cd/m2 ( candela per square metre) of brightness, a 1000:1 contrast ratio, 178-degree viewing angle and 14ms response time.

Unless we’re mistaken the new Apple Cinema Displays use S-IPS technology. [Editor’s note: it has been confirmed as the H-IPS variant. Hit tip: alphaod from the MacRumours forum.]

Inside the Apple LED Display sits an LG-Philips LM240WU6-SDA1 panel, which is a high-quality H-IPS unit rather than the cheaper TN panels found in most monitors. The difference is instantly noticeable and, make no mistake, this monitor produces stunning image quality. Pictures have an intensity and vibrancy that we simply haven’t seen anywhere else, you can’t help but be drawn in to the screen as it glows in front of you.

Although there are faster and more responsive monitors on the market, we had no trouble watching videos or playing games on the display.

Glossing over the problems

Okay, we’ve put it off for enough time and can no longer side step the issue. The big controversial problem with Apple’s LED Cinema Display is that this is a glossy display.

The argument over glossy versus matte displays has raged for a while now, with designers and photographers arguing that they do not offer accurate enough colour calibration to be used in a professional design studio. This argument really came to the surface with Apple’s latest MacBook Pro update and this, the LED Cinema Display. Because neither now offer the matte-screen options preferred by designers.

The question is can this monitor succeed whether others haven’t. Is this the glossy display to buck the trend and convert the non-believers and convince them that glossy display can be as good as matte for photographic work?

The short answer is ‘no’.

The long answer took an awful lot of testing, but is still ‘no’. 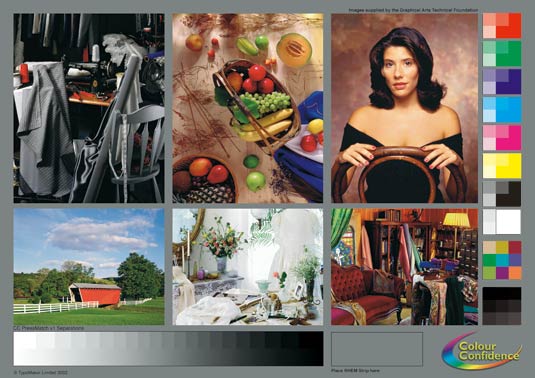 We set up Apple’s LED Cinema Display next to the 30in Apple Cinema HD Display, and the current office star, HP’s 10-bit LP2408ZX monitor. We used a Spyder3Elite to colour calibrate all monitors and Chromix ColorThink Pro to turn the ICC profiles into gamut graphs that showed how much of the total available colour spectrum was used by each monitor. We then used a Colour Confidence PressMatch Reference Print and image file to compare how close the colours were on the monitors to those on the reference print. We also set up a couple of other monitors for perspective reference, a Dell 2709w and NEC MultiSync LCD2090UXi.

We assembled a set of experts from Macworld, Digital Arts and PC Advisor to test out the monitors by use of the human eye.

First of all, lets look at the colour gamut charts. Here’s a quick explanation if you don’t know what you’re looking at. The outer dome-shape is the entire colour spectrum whilst the inner triangle is the amount of range available to the monitor in question: it’s triangular because the monitors work on RGB (red, green, blue) primaries. The bigger the triangle, the more colours it can show. 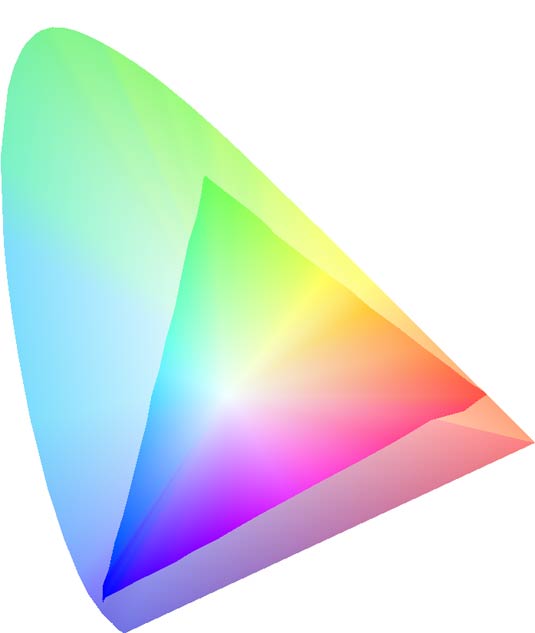 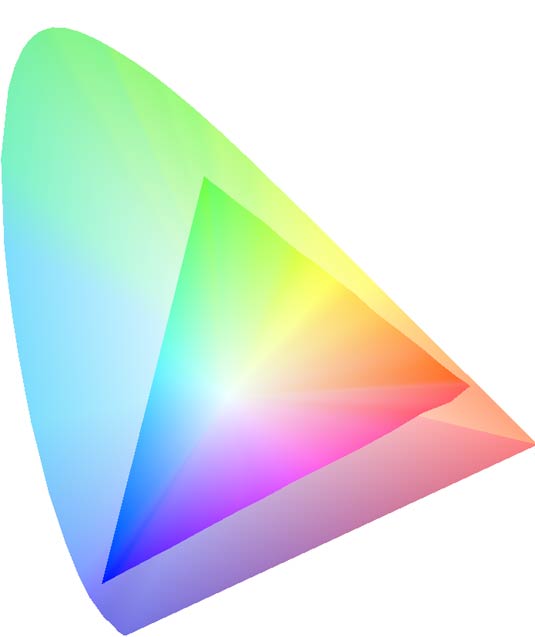 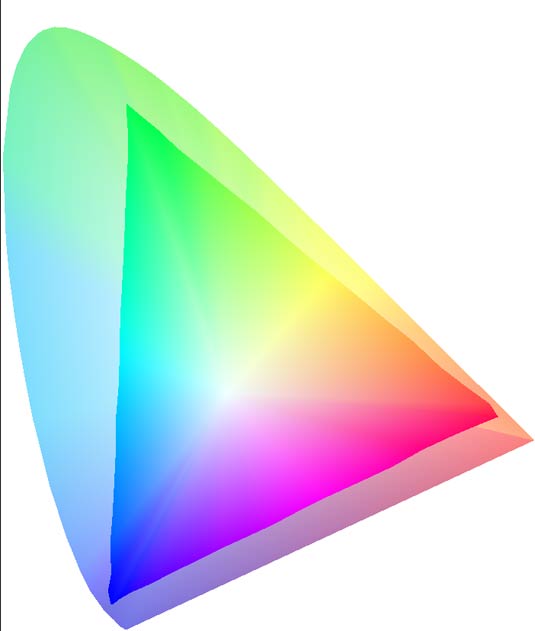 As you can see, the new Apple LED Cinema Display has a slightly larger range than the 30in model using the older LCD technology. However, it is less than the HP LP2408zx, which has the largest range of any monitor in our office. We should point out that we’re not offering this as an alternative buying choice but a technical demonstration of what’s possible (because it requires a 10-bit graphics card which Apple doesn’t currently support).

So, the new display has a larger range than the old model so it should have more accurate colour, right? Wrong. When we held the PressMatch Reference Print next to the screen we found extreme variations on the glossy display. The model that we were looking at had slightly rouge lips on the photograph that pretty much matched exactly on the older LCD Cinema Display; but on the new ‘glossy’ LED Cinema Display her lips looked unnaturally red. They were simply different colours.

There’s no denying that the LED Cinema Display produces beautifully vibrant images, the problem is they just don’t look like anything that comes out of the printer. Even after careful colour calibration.

There’s also the issue of reflection. When you are looking at a dark area on the LED Glossy Display you see your own reflection and also any strong lights reflected in the screen. This troubles some people, who find the reflections distracting. It also introduces elements of lighting and colour into the screen that don’t exist in the image itself – this is worrisome for a professional designer.

The result of all this testing is that we really can’t recommend this display for a professional designer or photographer. Given its £635 price tag, we have to wonder just who it actually is aimed at.

Still, design pros needn’t unduly worry; there are a great number of professional displays out there, serving a wide range of needs. But if you’re not a design professional is the LED Cinema Display really worth buying?